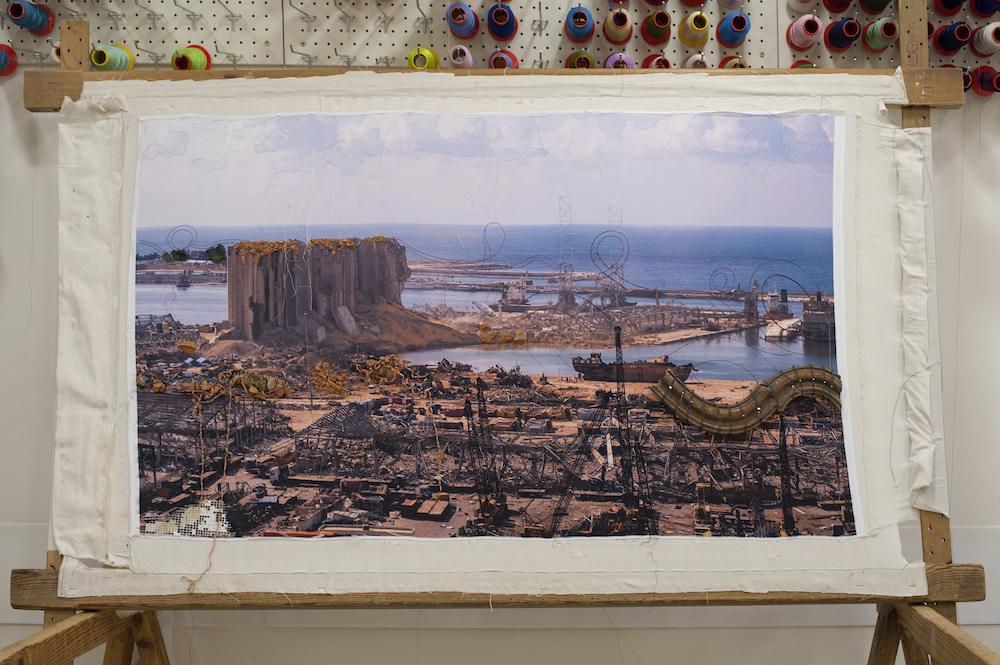 Where are we now?

Lebanese designers share their take on finding inspiration in the midst of turmoil, and where they stand on preserving their legacy in an uncertain future following the blast that decimated the capital. 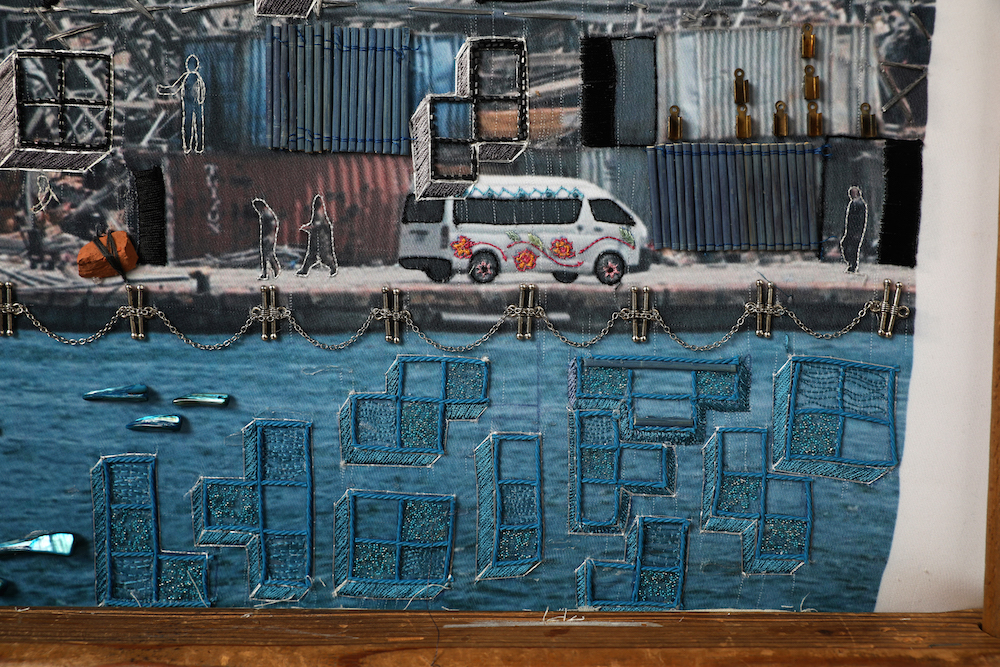 An embroidery work by Hass Idriss

It’s painful to grasp the harsh reality of our current world devastated by a global pandemic, recession, and widespread injustice. Though we may feel a heightened craving to return to “normal”, how we choose to move forward from this period matters more than ever. For Lebanese designers who face a balancing act of rebuilding and healing all at once following the Beirut port explosion, the creative community still hopes to preserve the fashion capital they worked so hard to build, despite the continuing uncertainty of the country’s future.

Womenswear Designer Hussein Bazaza presents the aftershock emotions of fear, panic, anxiety and confusion throughout his film. “The story is about everything I’m feeling, what we’re all feeling really,” Hussein says. The collection comprises of outerwear and juxtaposing styles for each look, as Bazaza felt uninspired to create light pieces in an effort to reflect the emotional heaviness of the year. “This season was more real, and I feel good about that. I feel like I can give more. Even though no one knows what’s going to happen next, we’re trying to stay productive. Once you stop, it’s hard to keep going again.”

“The time will come when my sense of designing will come back with strength and motivation, I’m not worried about that. I just have a broken heart, and I need to heal.”

October 17 will mark one year since the revolution in Lebanon started, where a series of peaceful protests initiated against the corrupt political class. With a gradually weakened economy, local currency evaporating, banks rationing their cash dollar reserves, and the fatal Port explosion, designers knew their brands would have to adapt. For designer Lara Khoury, such conditions make the future of her Evening Wear line in Beirut all the more uncertain. “I refuse to be part of this system, it’s theft, it’s just not fair,” she explains. It remains almost impossible to rely on local sales in Lebanon, when essential goods are priced almost 7 times their base price due to the hyperinflation. In the face of such devastation, it’s not a question of finding inspiration in crisis, but rethinking creative purpose and intent. “Before the explosion, I had started a project called the secret of survival. I realized people don’t need fancy clothes and evening wear right now, they need basics to protect themselves.” Lara picked 4 designs from her Golden collection and created a DIY sewing kit with patterns and instructions for individuals to create their own clothes. The kit contains patterns in 5 different sizes, and includes a guide sheet and sewing instruction sheet written in English and translated in Arabic. “This was my way of inspiring people who still have the ability to dress during these difficult times. Fashion can wait for now… The time will come when my sense of designing will come back with strength and motivation, I’m not worried about that. I just have a broken heart, and I need to heal.”

The morning after the August 4th explosion, hundreds of youth showed up to the most damaged neighborhoods and began organizing clean up efforts. Immediate on-the-ground relief started, from assessing damages to dispatching food. Citizens fully recognized if they didn’t do this themselves, no one would. Two months later the cruel reality remains the same, with a heavier aftershock to those who are still in Beirut. Desperate to rebuild, not knowing for whom, as so many feel there is no choice left but to leave. “The support we received on the ground and from abroad has been overwhelming, but we still need a lot to be able to get back on our feet. For those who are staying and for those who are leaving, everyone needs help. We know that to be a stranger in a foreign country is very difficult, but so is to be home in a destroyed country,” says Lara.

Beyond damaged storefronts and ateliers, production has been hindered. Illustrator and fashion designer Timi Hayek relies on importing her goods and products to create illustrations on giclee prints, silk scarves and dresses. “I was already in a form of transition because of the economic situation and inflation, and I was exhausted from doing everything myself. I’m in the process of renovating and finishing the shop, but it’s hard to find the motivation to sell again because of the economic collapse. It’s not comfortable, we’re still healing.” The designer is currently focusing on illustrations of old Lebanese houses and mountains on print. “I’m still figuring it out. I just want to create art and feel safe,” says Timi.

“There is a humungous silence in the city that we can’t avoid,” explains Hass Idriss, a Beirut-based couture designer. “This hit us at home. We are not resilient, and this is too violent. We’re still mourning, I feel like we’re having the exact same conversation over and over again trying to process. I’m not ready to turn the page.” Hass dove into rebuilding right away, promising to resist escapism and continue to nurture the 11-year brand he has put everything into. “I love what I do, but as designers we need to show awareness right now, this is not a dreamy year. We need to be human, and transparent. Our old ways don’t feel appropriate.” The designer is currently working on tapestries of printed images of the damage adorned with thread, beading and collected debris from destroyed areas. The works also feature stones, wood, and fragments from burnt clothes and carpets. “I want to keep myself and my team busy. Motivation and expression means something new to us now.” 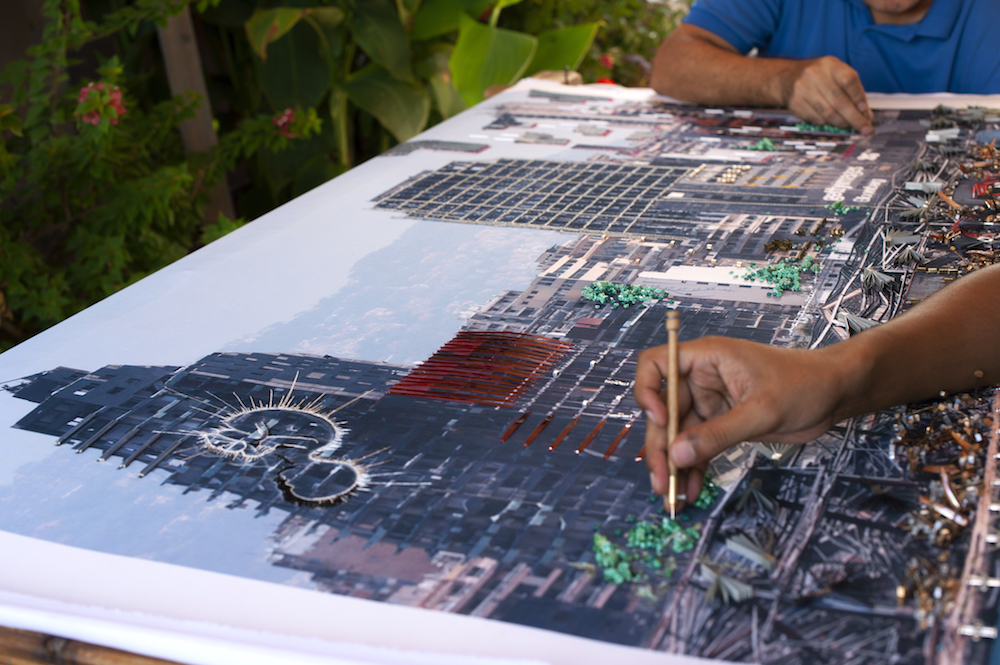 An embroidery work by Hass Idriss

Spirits may be low, but the work has not stopped. “A few days after the explosion, I knew if we were going to sit and dwell on it, I was never going to get anything going,” says Rebecca Zaatar, founder of Thym. “I don’t want us to give up. Lebanon’s fashion industry was always looked up to, I don’t want that to change. The morale is mixed, of course… If you caught me on a different day, I may have had another answer.”

Two months since the blast and the entire population remains disturbed, aching for a sense of security and sign of reassurance. How do the Lebanese find the motivation to restart, in a country where its citizens are so often left feeling let down for their efforts? It’s not resilience, it’s faith in their own people. It’s a collective relying on one another for support, and never in a government that has proven to be absent. Settling in discomfort is allowing local designers to make room for newfound purpose, and believe in their prospective impact to not exclusively design for dreamy optimism, but for honesty, protection, and change. Their legacy will teach us and show us how.