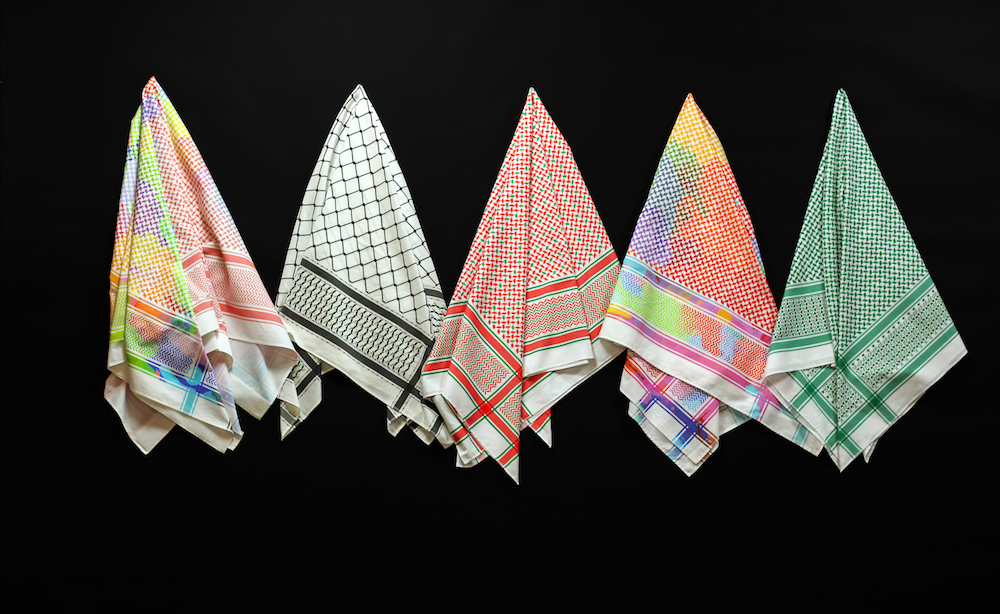 A once bright and colour gallery is now submerged in darkness. Suddenly, music can be heard and a flicker of light appears, allowing the audience to get a glimpse of a musician playing traditional music. This light begins to move, and as it does so, the music also travels from the performance area and passes a group of viewers seated before the music-player. As the volume increases, a faint image of a woman can be seen behind a black screen. Behind this shield beams of gold and yellow are boldly layered against the surface in a process called Live Projection Painting. A hidden artist behind the darkness is quite literally painting with light, illuminating art that is often hidden from British audiences and marking the opening of Transitions, an exhibition of 39 artists from across the Middle East that is taking place this summer at Menier Gallery in London.

This performance by Iraqi-Omani artist Estabrak Al Ansari is one of three parts to Tales of the Mother Tongue, first performed at the 2016 Marrakesh Biennial. The conceptual draws attention to buried figures in global history and is also a project about colonization, regaining strength, root and purpose. Similarly, Transitions presents work that can be overlooked. Hosted by Reconnecting Arts – a platform that supports emerging contemporary Middle Eastern creatives – the exhibition allows the participating artists to take control of the way they are represented through calligraphy, painting, installation, sculpture, videos and zines. 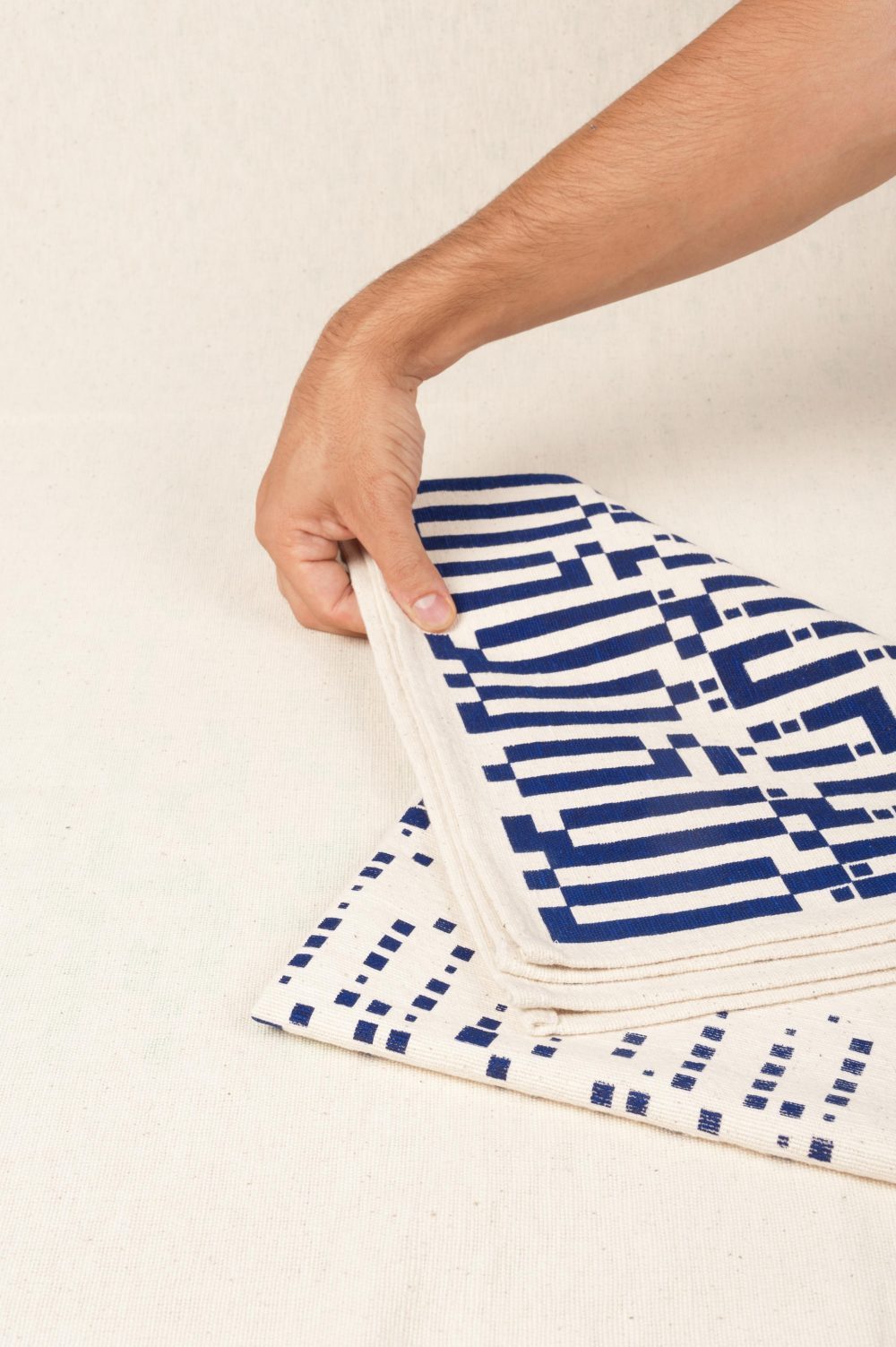 Light shimmers throughout the exhibition. In Saudi artist Feras Zuhair Nour’s work Arab text reads haram حرام (forbidden) one second, and halal (lawful) the next. The piece is provocative, moving between two extremes in a matter of seconds. Nour explains: ‘my main focuses are on displacement, cultural continuum and identity.’ The work spotlights two words in the Arab language that the west are fixated by, concepts that suggest the Middle East is black and white, yet Nour’s flickering text shows this not to be the case, nothing is static – everything is constantly moving. 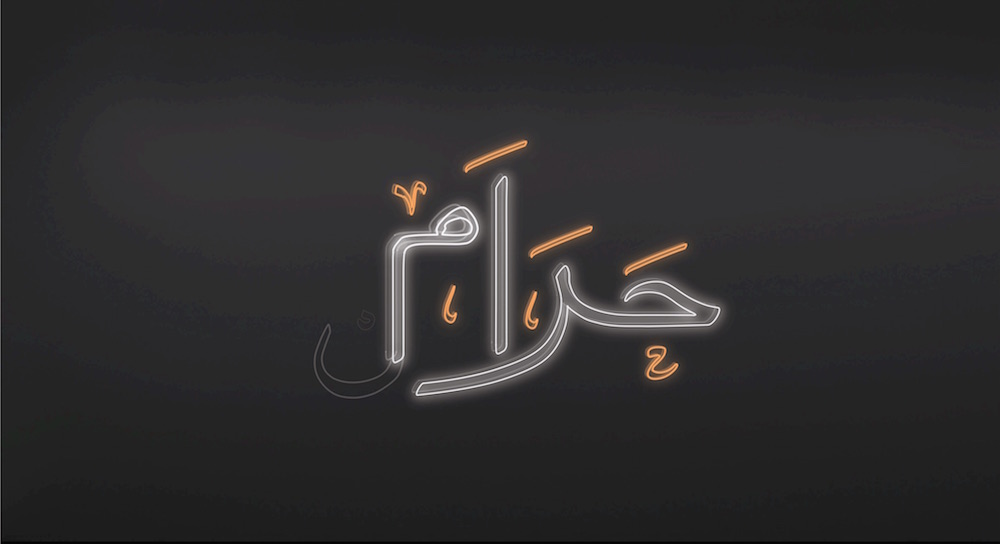 From modern, electric light to traditional techniques, Esra Alhamal’s work is presented in the form of a series of traditional Islamic illuminations. London-based Alhamel fuses the historic use of gold, gouache and watercolour with new methods by painting on top of text to experiment with different backgrounds. Taqwa Al Naqbi also works with paper and tradition in Six Small Dresses, a series of hand-made textiles representing the identity of an old Emirate woman. The papers – constructed from six of Al Naqbi’s grandmother’s dresses – are a celebration and appreciation of her heritage. 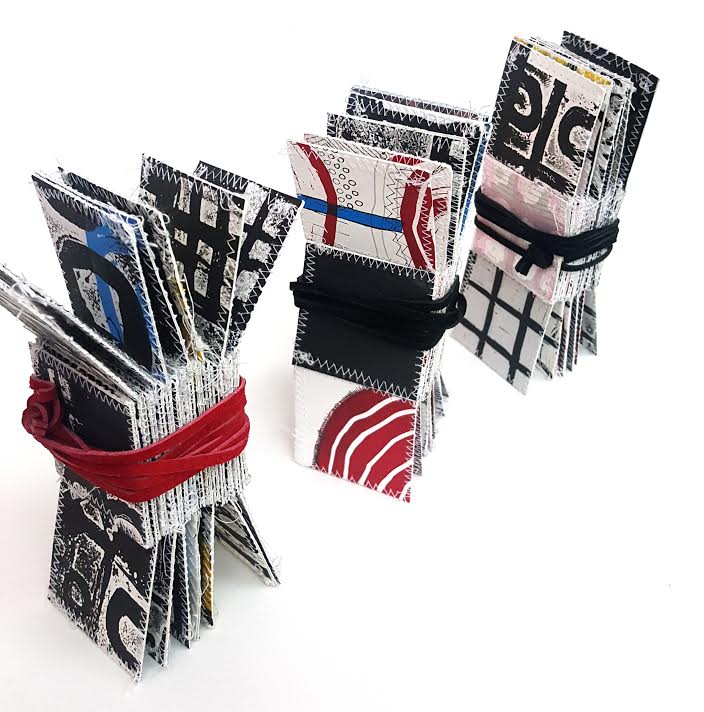 While many of the artists look to the past, others look to the future. Meshal Al-Obaidallah’s Shimagh Ajyal does just that by re-imaging the traditional shimagh – an Arabic headdress – by adding bright colours to the historically redgarment, showing the fabric being passed to a younger generation that is reinterpreting tradition. Reconnecting Arts explains: ‘Some artists may want to focus on the politics of war of their country with every right to do so, another artist from the very same country may want to focus on the optimistic future of it.’ Thus artists like Al-Obaidallah are accompanied in Transitions by creatives like Ayham Jabr whose collages are heavily influenced by science fiction. His futuristic images illustrate another world, where, in one image, Earth appears in space, while his figures populate another planet, or perhaps the moon, with signs and banners reading ‘We are not terrorists’ being waved around amongst the stars.

The surreal carries through into the photographic work of Egyptian artist Shaimaa Alaa. Across a series of dream-like black and white images, women can be seen with their heads in the clouds, clinging on to mannequins with hair covering their faces. Imagined stories appear too in the comic books created by Qatari illustrator Nada Abdulkareem. Her protagonist, Laila, appears like an animated figure navigating a fictional world inspired by Islamic folktales and video games. Other cartoon characters are showcased in the work of Muhannad Shono, Riem Ibrahim, Mohamed Mazloum and Rawan AlMahrouqi, whose feminist works document the experiences of a 20-something woman in the Gulf. 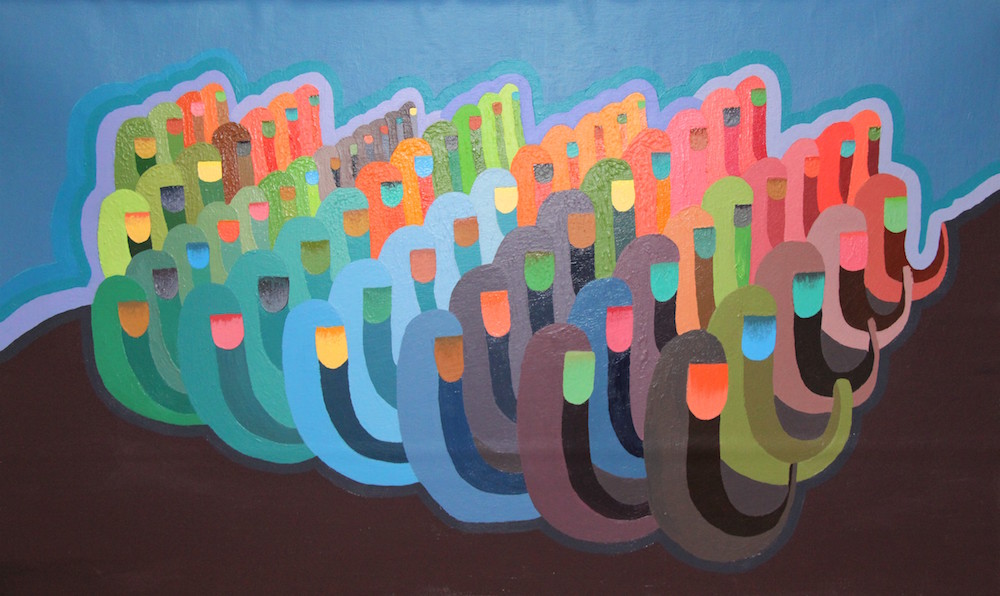 Of the paintings in the exhibition, the most memorable are by Kuwaiti May Al Saad and Qatari Fatima Mohammed. On a large canvas, a veiled woman stares defiantly at the viewer waving the universal sign for peace. Across the background the word ‘KAPOW’ can be read while ‘I HAVE A DREAM’ is written in big pink lettering across the bottom of the image. Her woman is strong, she is in control and she is taking charge. Meanwhile, Mohammed’s paintings depict 3naj, a fictional female character who is half American bald eagle and half Khaleeji. 3naj wears her heritage proudly through the batoola, a face shield that protects the visage from desert sands, and also appears like a golden eagle beak in Mohammed’s paintings. The artist produces her work with found materials and even creates her own ink. Similarly, Alaa Alqedra’s Story Board paintings on concrete slabs illustrate found objects – lost toys abandoned in the rubble of war zones.

Painting by May Al Saad 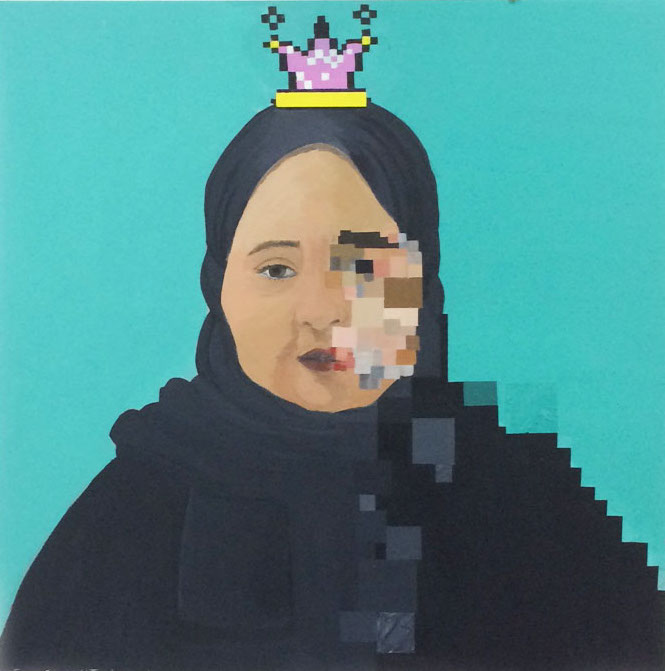 In a true depiction of east meets west, Qatari Ahmed Al Jufairi’s work is influenced by Beyonce and Michael Jackson. The combination of pop music inspirations with Al Jufairi’s surrounding Arab culture results in Jam, a colourful series of contemporary pop paintings and a video that shows a masked Arab man pouring paint over himself, moving the traditional painting to a three-dimensional living, moving work of art. 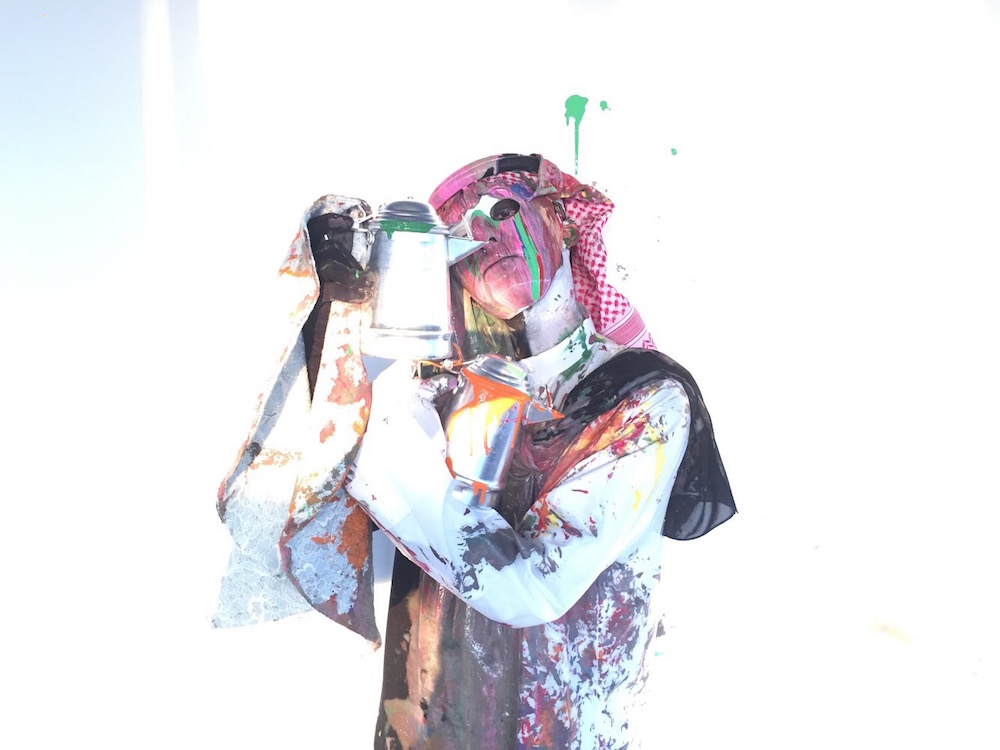 From visual to fragrant, Gida Hamam Homad exhibits a truly unique piece in the form of Geography of Scent, inviting the viewer to smell a series of vials of different aromas and asking them to take notes, resulting in an immersive collaborative work. A sensorial anthropologist, Homad’s work is the result of research into migration, displacement, exile and memory.

Below surface level, Estabrak Al Ansari moves light away from darkness to depict the hidden in photographs taken underwater. In a stark contrast to her performative piece on the exhibition’s opening night, Omanis Underwater is about silent, sociopolitical issues, that she has represented as submerged below ground, where all sound is silent. ‘Transition is really important because it talks about change in an honest way and I think that that’s part of life’, says Al Ansari, ‘No matter who you are, no matter what you’re doing and no matter what avenue you’re in.’ Transitions succeeds on presenting an exhibition that touches on issues that effect young, Middle Easterners, but also illustrates that there are common issues and interests, irrespective of language, geography or culture, that speak to us all. 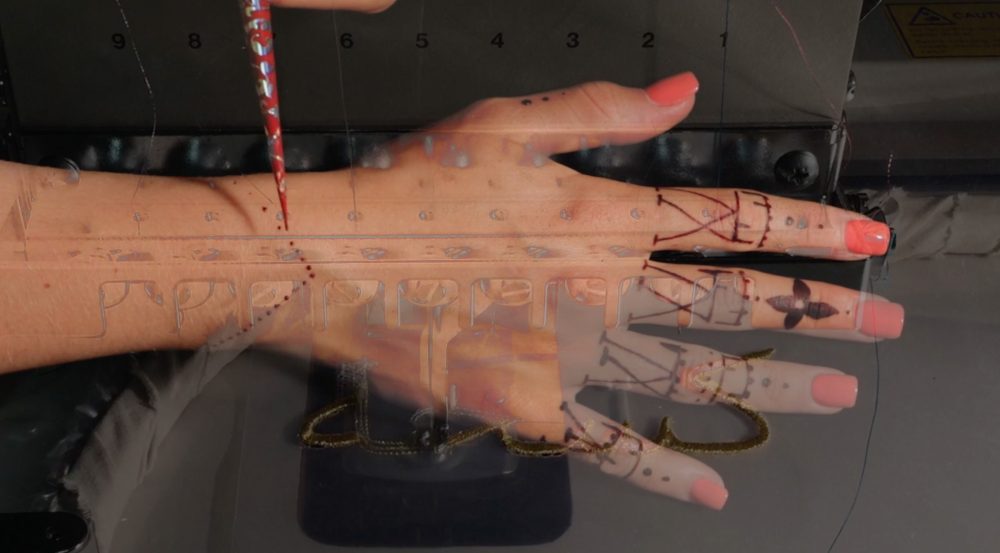