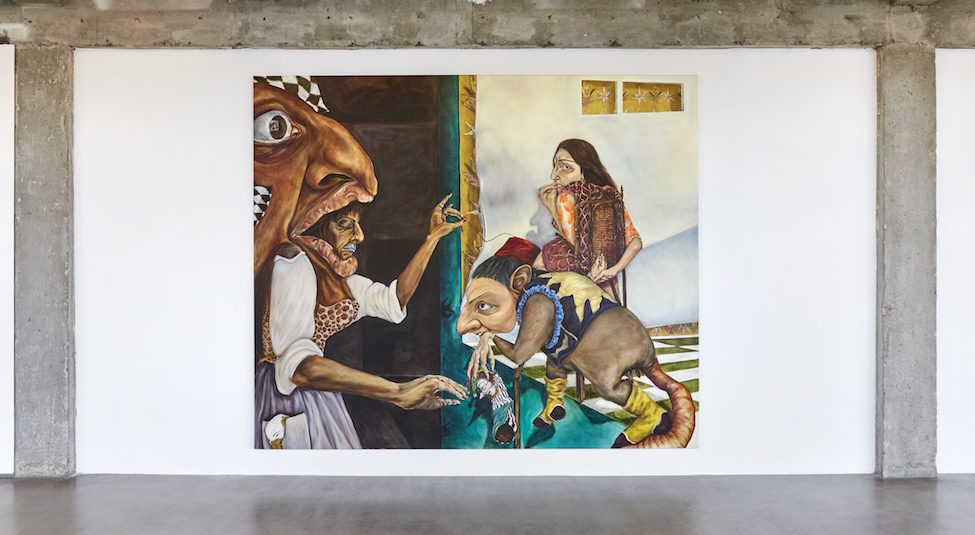 Grotesque figures, missing eyes and circus-like settings, Nour El Saleh’s new body of work on display at VO Curations in London give us a glimpse into an alternative, surreal world.

“Due to the fact my work relies on my imagination, it tends to stem from the most prominent parts of my past and my experience as well as whatever intrigue or questions dwell in the moment”, she says, “I wouldn’t possibly be able to narrow down what specifically inspires my work but I can confidently say that it tens to be an overwhelming combination of what dwells in my subconscious and what my experience of reality has been and continues to be.” 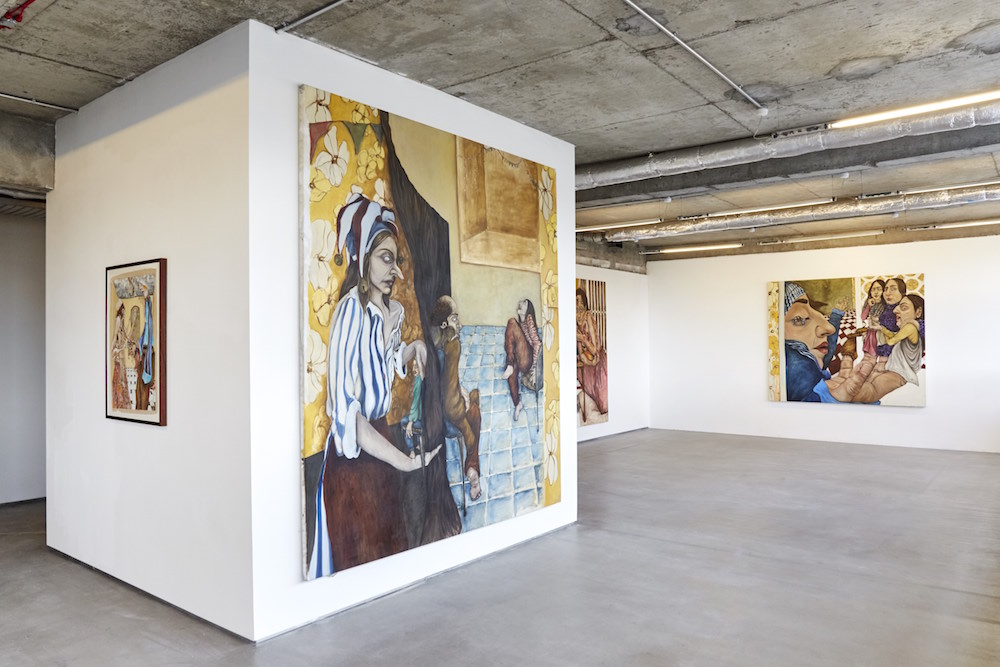 Born to Lebanese parents, and raised in the UAE, Nour has just finished a degree at London’s Slade School of Art, and is about to embark on postgraduate studies at the Royal Drawing School. And, while she is based in the UK for now, aspects of her Middle Eastern upbringing creep in throughout her work. A blue eye appears on the cheek of a figure in Inhabited Props In A Box and another character wears a tarbush in Dance Monkey, Dance! You might also notice that many of Nour’s family have large noses, which is in part in recognition on the prevalence of plastic surgery in the Arab region. “Due to my personal experience and exposure with that subject, it is something that often creeps into the stylization of the facial features in my work”, she says, “That being said it is quite important that I clarify that I do not utilize my practice as a means to comment on plastic surgery in the Middle East. My personal experience and background influences how I treat the face, the nose and the very notion of the influence of physical properties.”

Nour’s characters not only have peculiar facial features, but also strained, often contorted posture. Sometimes they are pulled into different stances like puppets on strings. “Referencing puppetry, the theatre or anything to do with the use of props and costumes has been a way for me to challenge and channel the uttermost personal and challenging questions that linger in my subconscious while having the ability to distance myself and allow myself to ‘play’ with them”, she explains. Her characters play with each other too. Sometimes a figure will carve window out of someone’s forehead – as in Wrong Side Of The Table – and peak through, as though their inner persona is waving to the outside world. 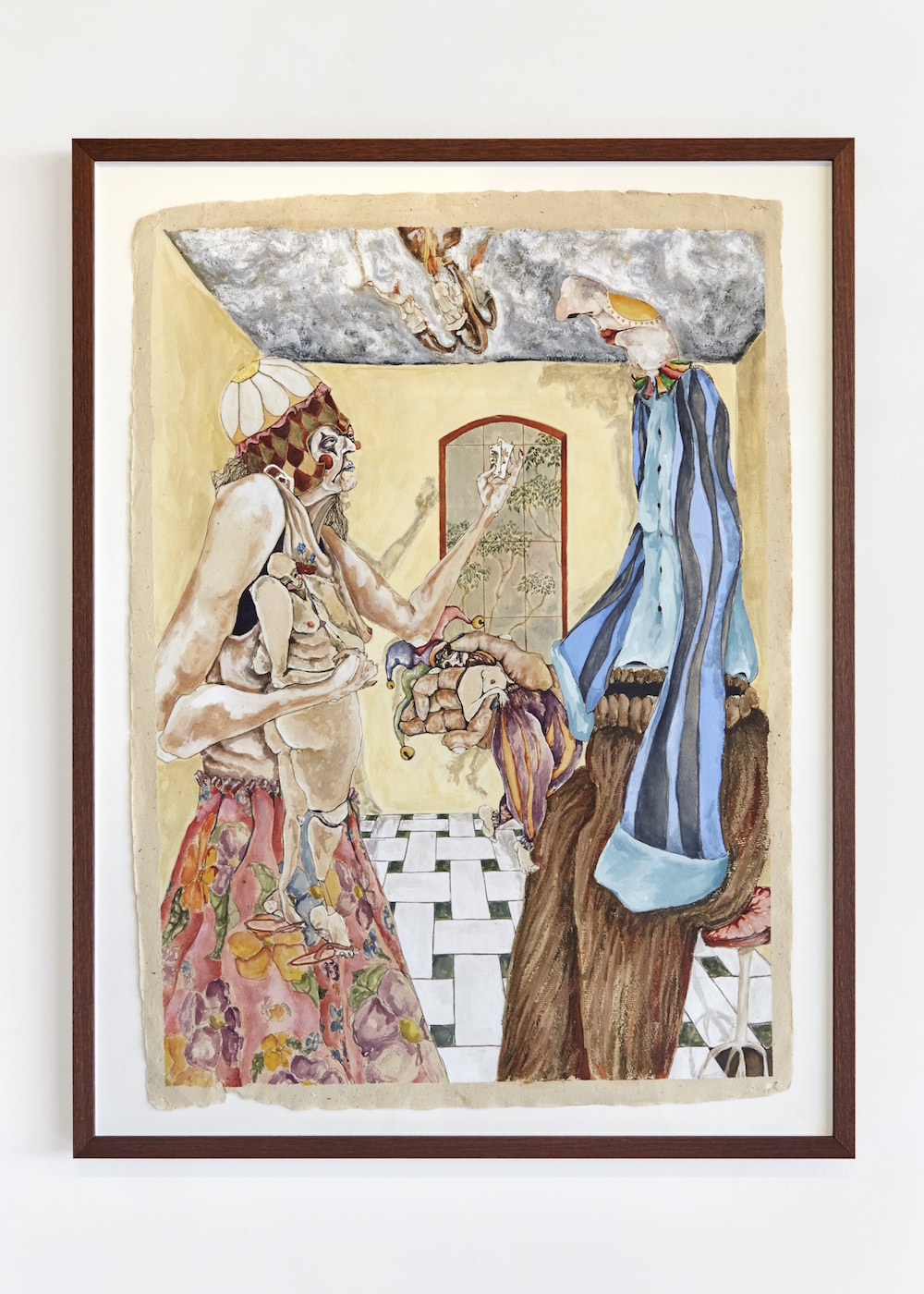 Nour’s work is full of dancing monkeys, finger puppets, clowns, young children and elderly characters too. They look like they have walked out of a fairytale, making a new home onto her canvas. “I see the characters, objects and spaces in my paintings as various entities utilized to create a dynamic, which challenges me through my process and the viewer thereafter”, explains Nour, “The human face and body is one people can relate and empathize with, just like the presence of a floral wallpaper in a homely setting or a set of striped pajamas. The obstruction, exaggeration and rearrangements of those familiarities, to me creates a world where preconceptions become confusing and doubted.” She goes on to explain that the characters in her work stem from short stories that she writes, which tonally mimic children’s books, where dark and difficult subject matter is depicted with exaggerated characters.”