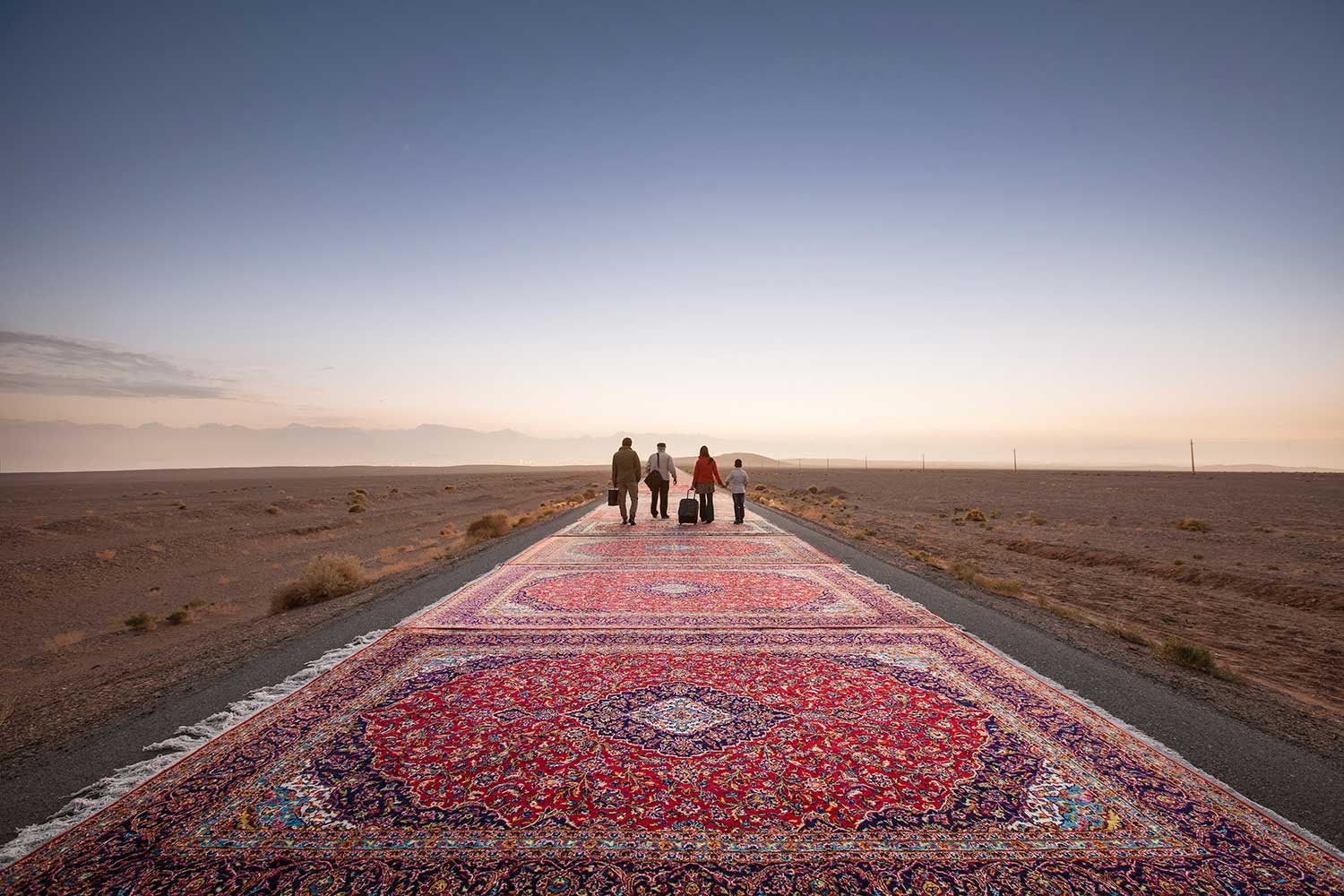 Abu Dhabi Art is back from November 21st to 23rd in Manarat Al Saadiyat, bringing together about 50 galleries from no less than 21 countries.

From established artists to emerging ones, a focus on China and India, a Photography Studio dedicated to the Moroccan artist Mous Lamrabat, the fair confirms its position of leader in the MENA artistic landscape.

We took a tour and gathered our favorite galleries and artists from the Middle East, North Africa and South Caucasus, and allow us to give you a piece of advice: run there this week-end and check them out!

Wafa Hourani is a young Palestinian artist who initially started in filmmaking and is presenting to Abu Dhabi Art his works that are architecture-models looking structures made out of foam. He includes elements such as photography, stamps, mini characters…into his work, to depict imaginary scenes of what the future of the socio-political aspects of Palestine under occupation could be.

“Panorama from Qalandiya” was created based on what a futuristic refugee camp could look like while “The Only and The Lonely Mosque” is a criticism of the “spiritual emptiness” that has been instilled by political Islam. 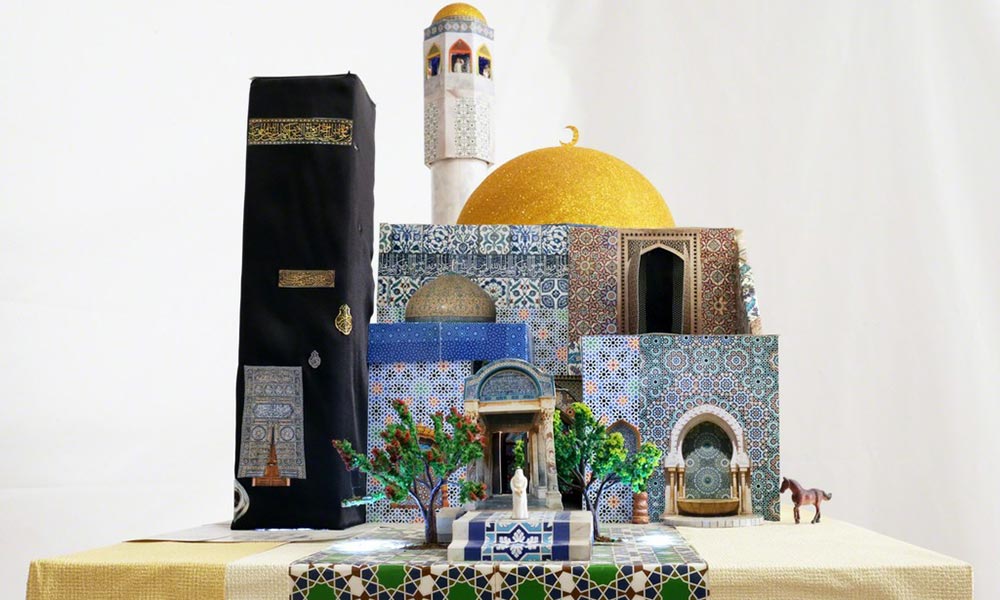 Does Azeri artist Faig need any further introduction? His works bring together past and future, with a strong emphasis on traditional decorative crafts (notably rug weaving from Azerbaijan) to which he insufflates modern elements such as deconstructions or graffiti.  They result in contemporary pieces that have gained international recognition. Ahmad is present at Abu Dhabi Art with Sapar Contemporary that is showcasing a generous selection of his works. 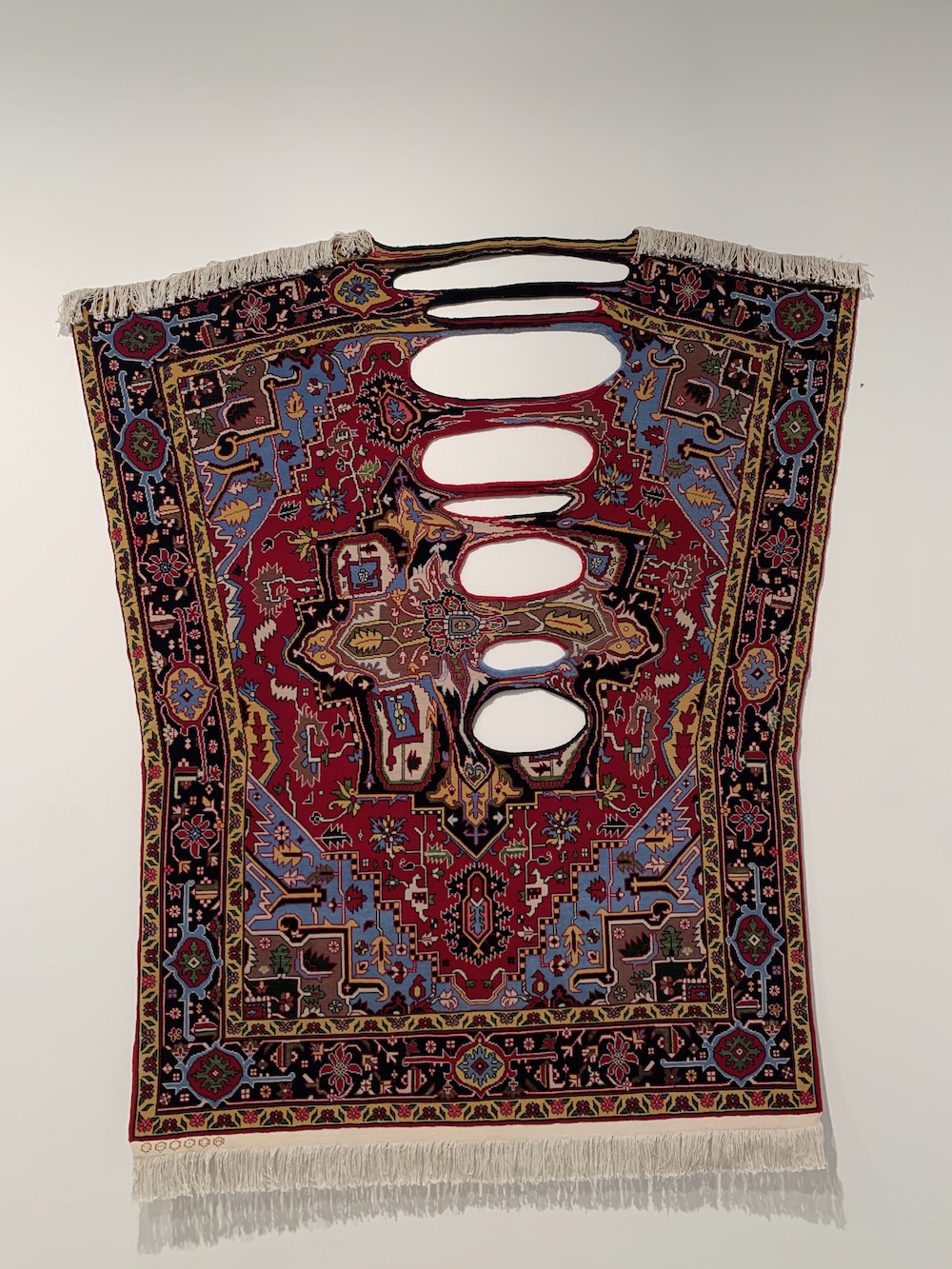 81 designs is a social entreprise that allows refugee women to earn an income by working on pieces in collaboration with renowned Arab artists such as eL Seed and Hassan Hajjaj or Bokja. These women are also trained in a workshop in South Lebanon to help them gain confidence in their skills. For Abu Dhabi Art 2019, 35 women from the Ain El-Hilweh camp have created tatreez pieces based on artworks from Tunisian artist eL Seed under the project “The Journey” which advocates values such as co-existence, harmony, peace and humanity. 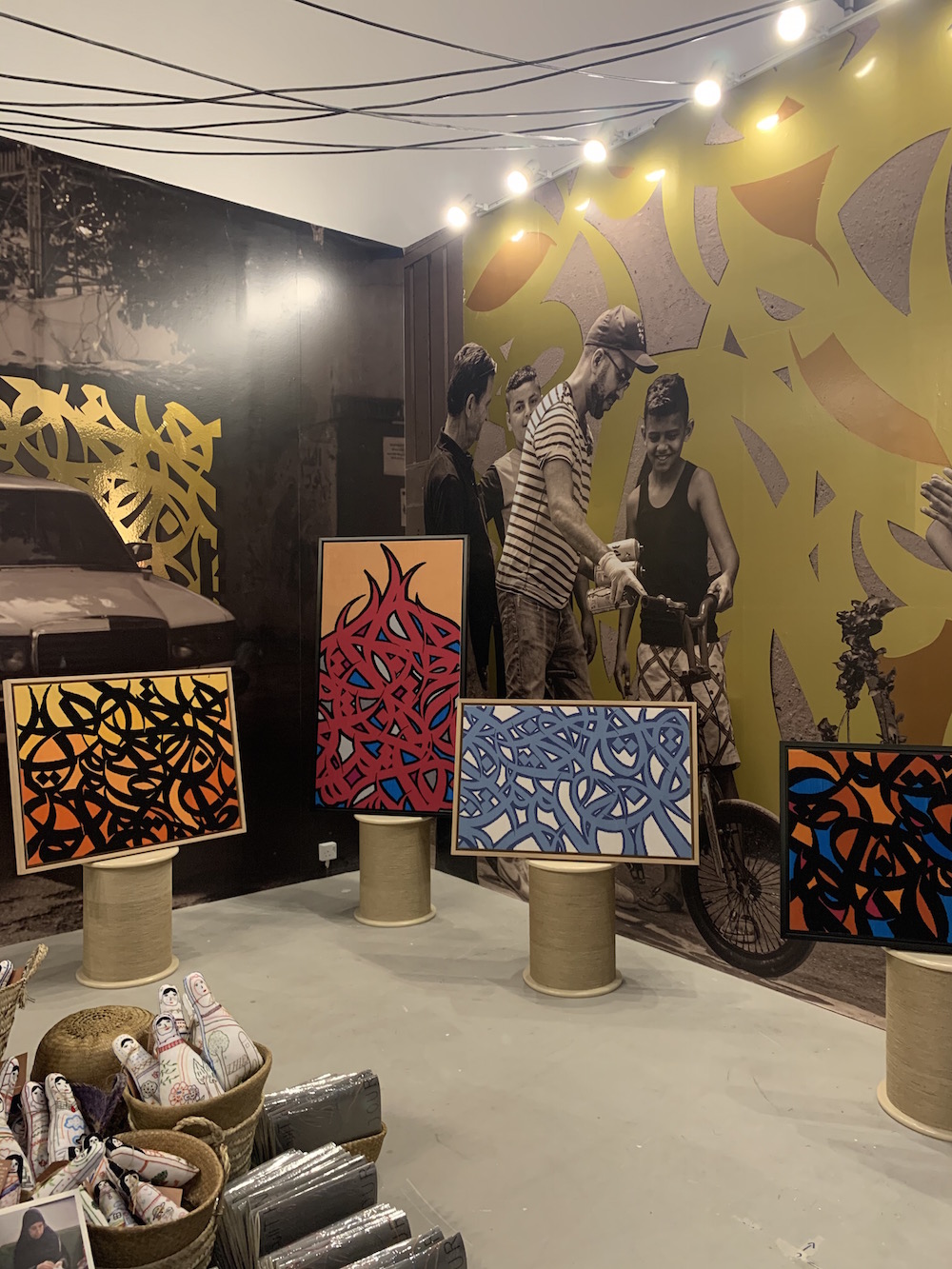 Seife’s works are a reference to old Persian rugs, that have been a big influence in his early life, growing up in Miami to immigrant parents. His way of creating is closely linked to his emotion: the patterns and colors are an indicator of his emotional state and state of mind. Present at Abu Dhabi Art with Jeddah based gallery Hafez, he’s showcasing his work “Valleys (My Love)” for which he used acrylic on concrete. 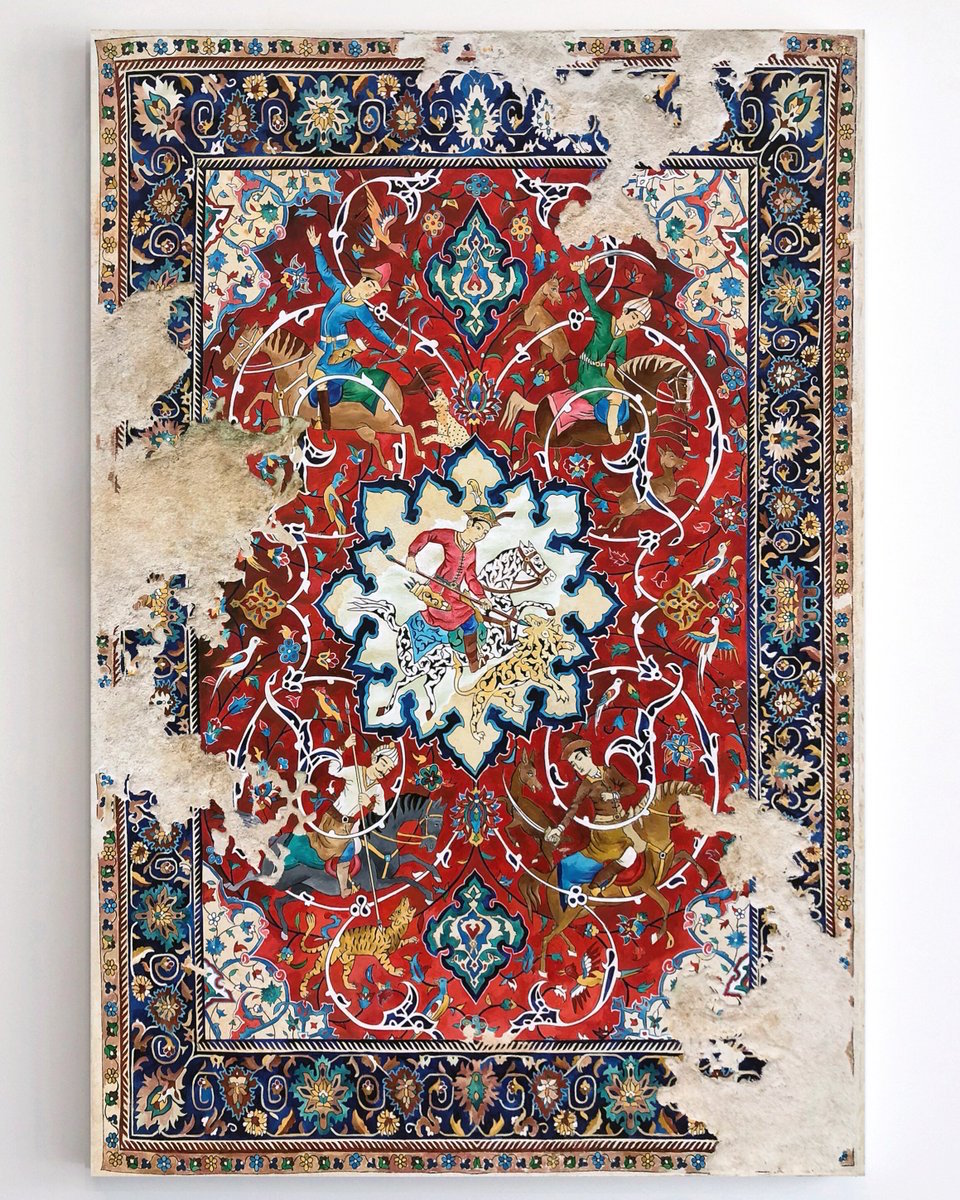 Mous Lamrabat is a Moroccan photographer born in North Morocco who grew up in Saint-Niklaas, Belgium. This cultural mix of East and West, Europe and Africa but also this “identity crisis” as he mentions it, has been a good source of inspiration for Mous, whose become famous by injecting elements of popular Western culture (Nike, McDonalds…) and big brand’s names (Gucci, Chanel,Balenciaga…) into his photographs taken in his home country. Portraying scenes from the desert or the streets of Morocco to which he incorporates people and props, Mous turned his uncertainties, induced by a challenging self-identification, into works of art.

The Photography Studio at Abu Dhabi Art is 100% dedicated to Lamrabat’s photography and introduces mainly “Fake Me Baby” a series created with ART/C in an attempt to depict the beauty of Moroccan culture, “even in fake branded hijabs” 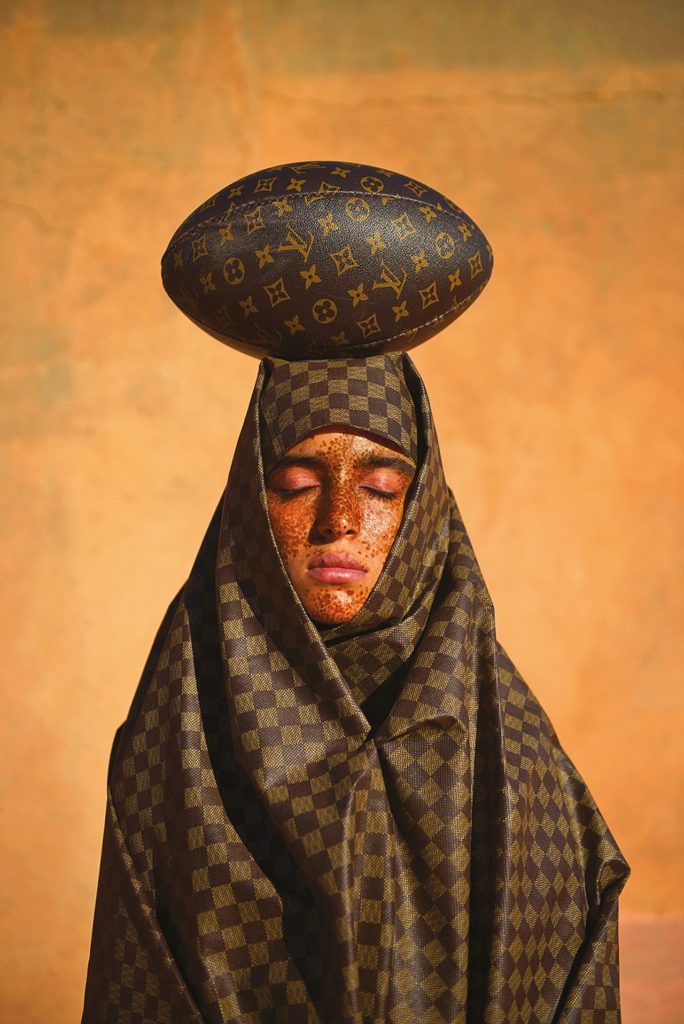 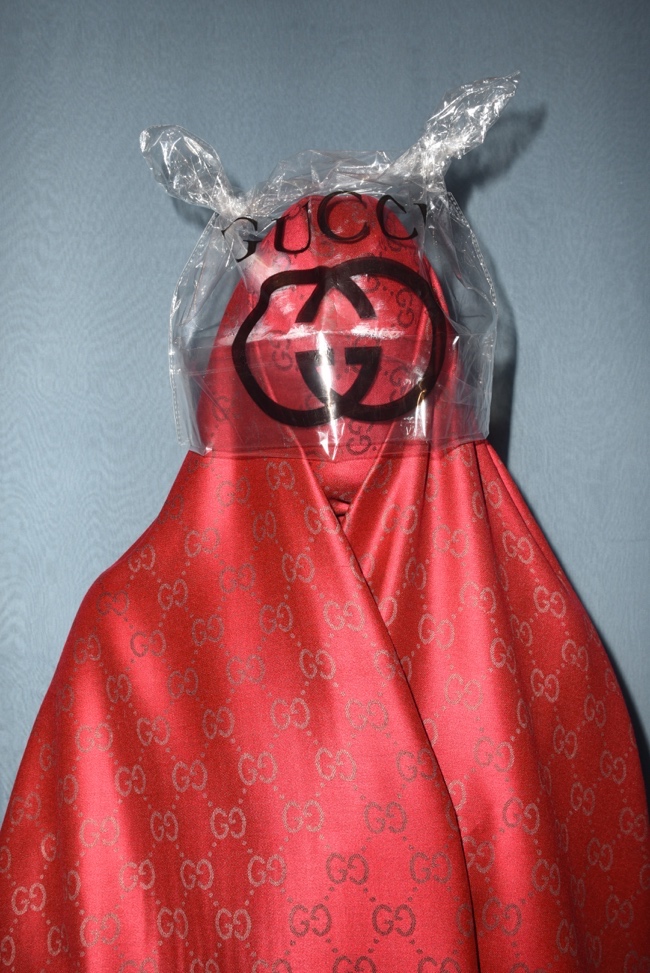 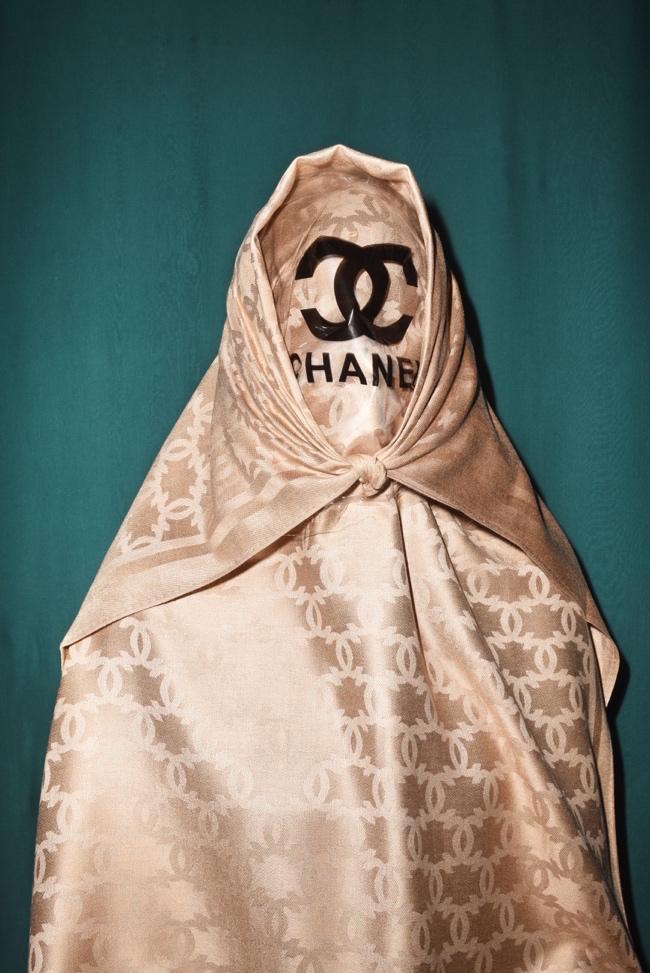 TO DISCOVER AS WELL: 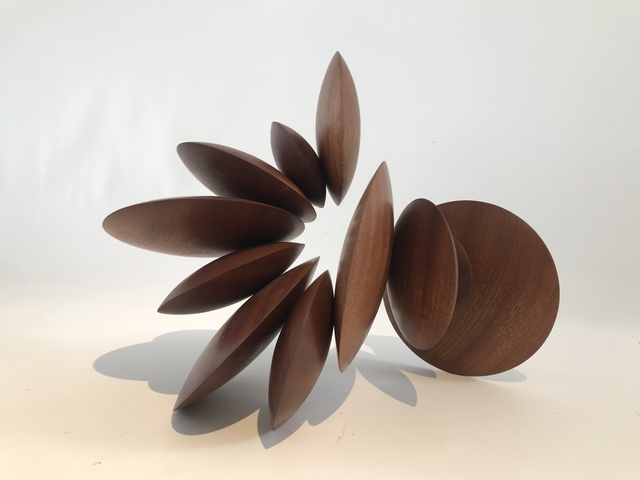 .  The you-can’t-believe-your-eyes-it’s-a-painting artwork of Antonio Santin represented by Galerie Isa. 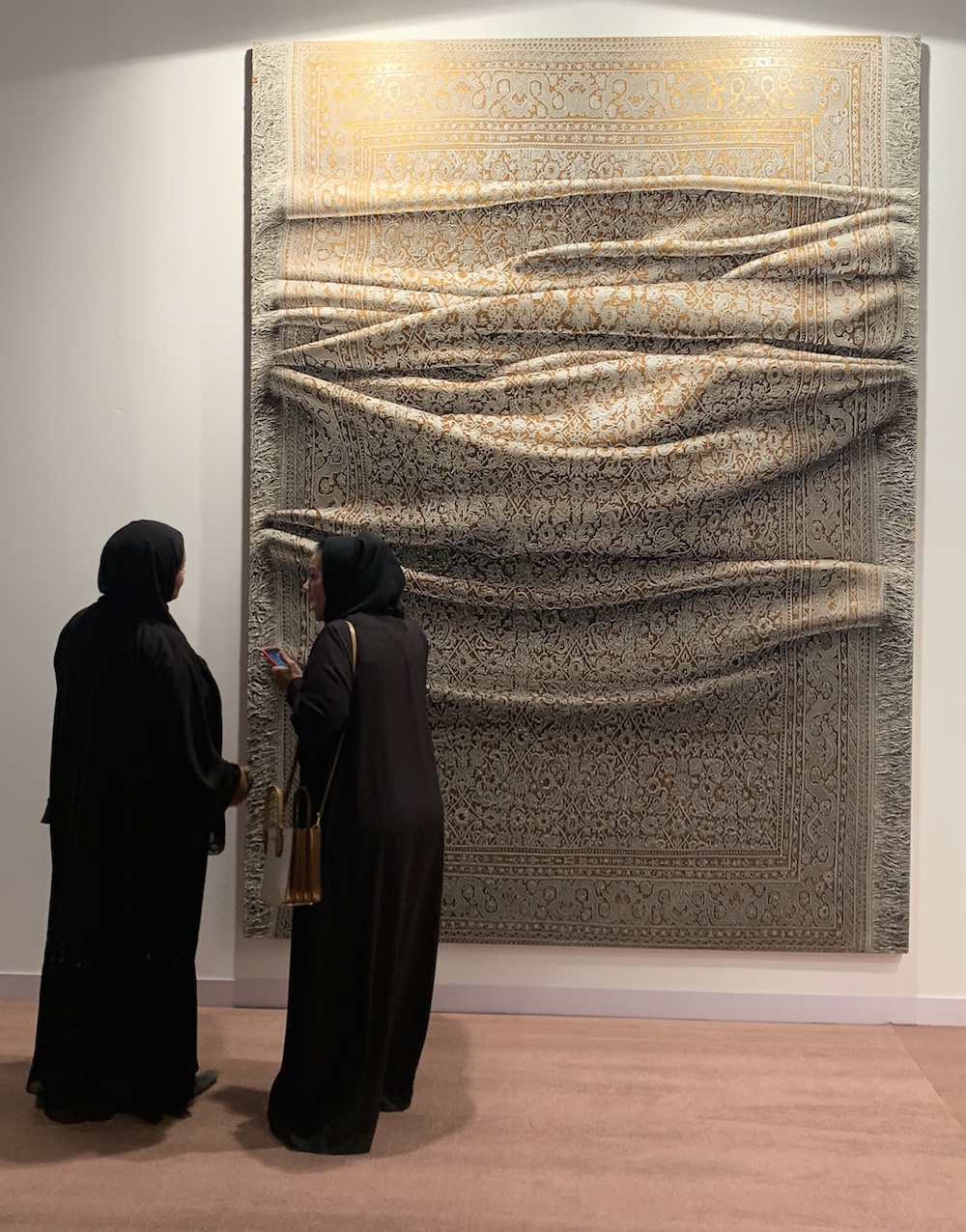 .  Ai-Da, the world’s first artist robot, which we won’t lie, both frightened us and took our breath away. 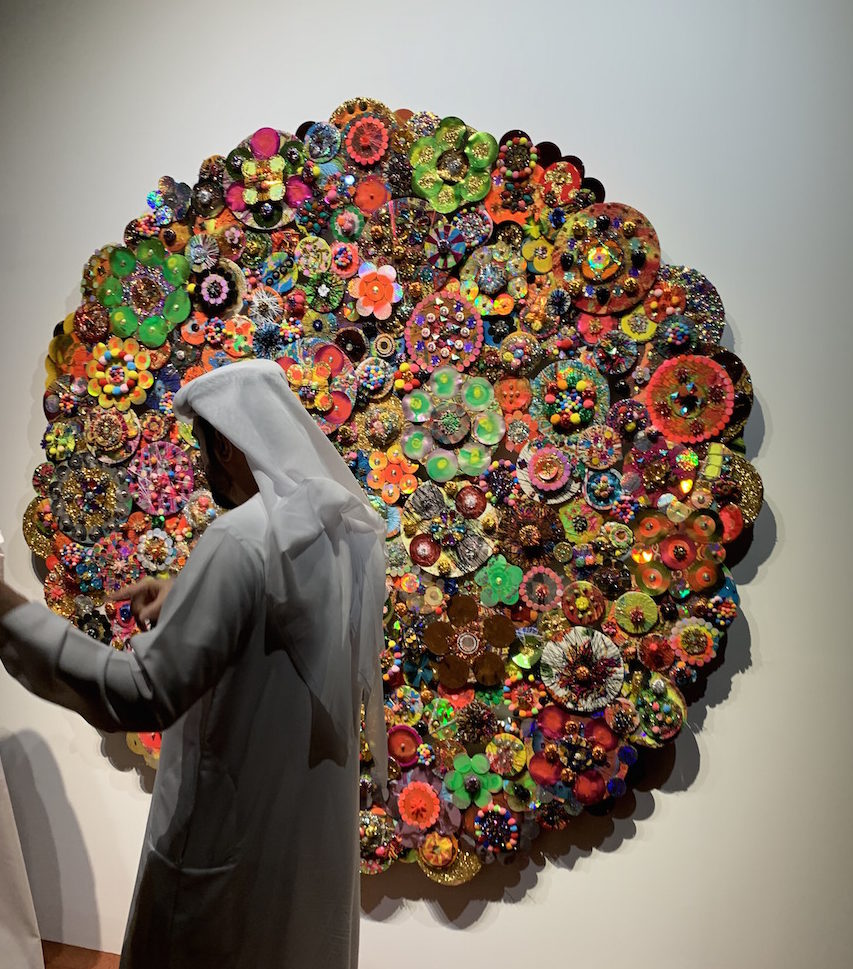 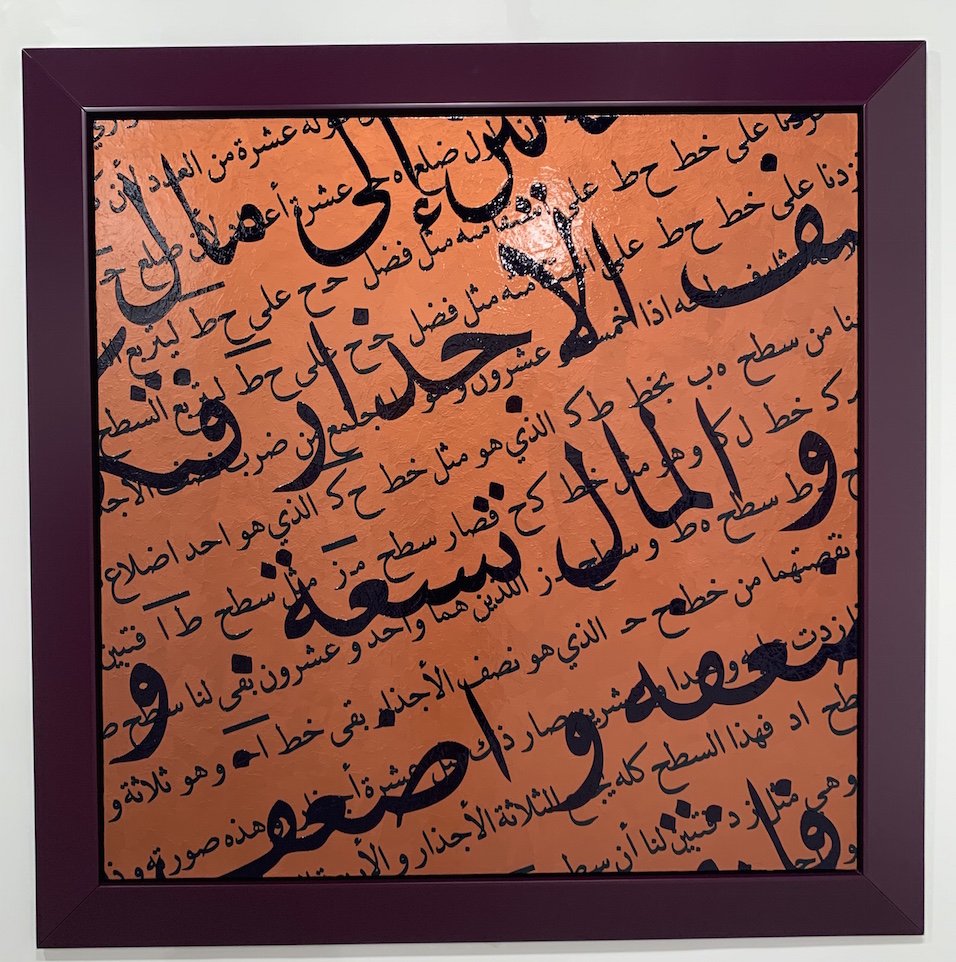 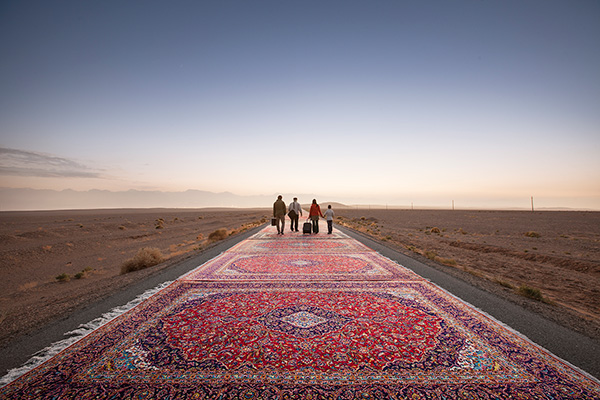 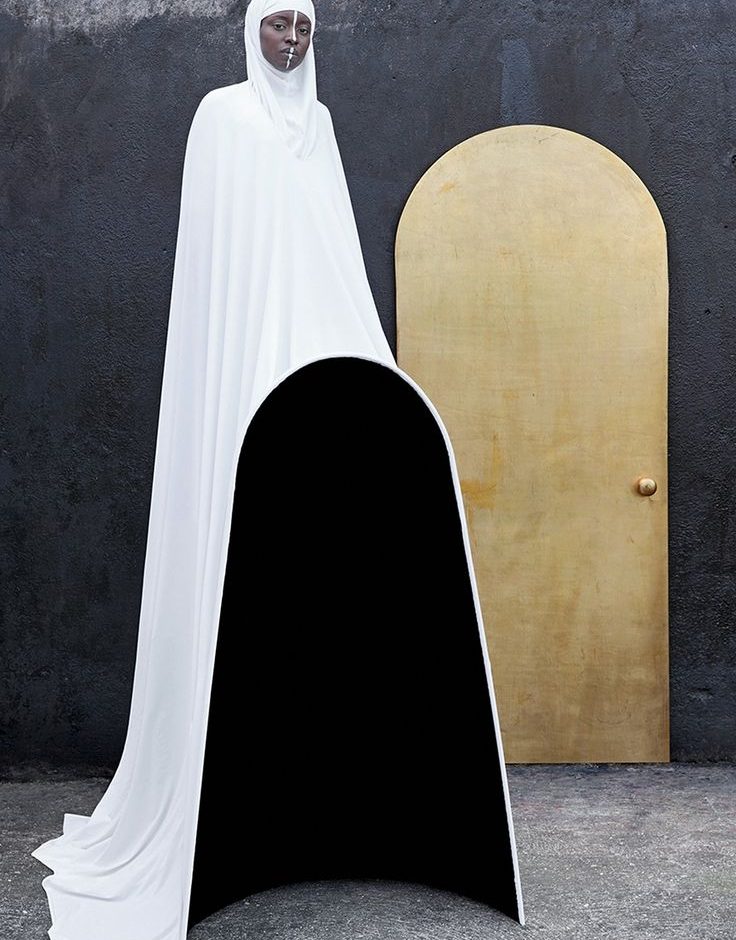 .  The incredible carpet woven by Afghani women for the Year Of Tolereance with FBMI 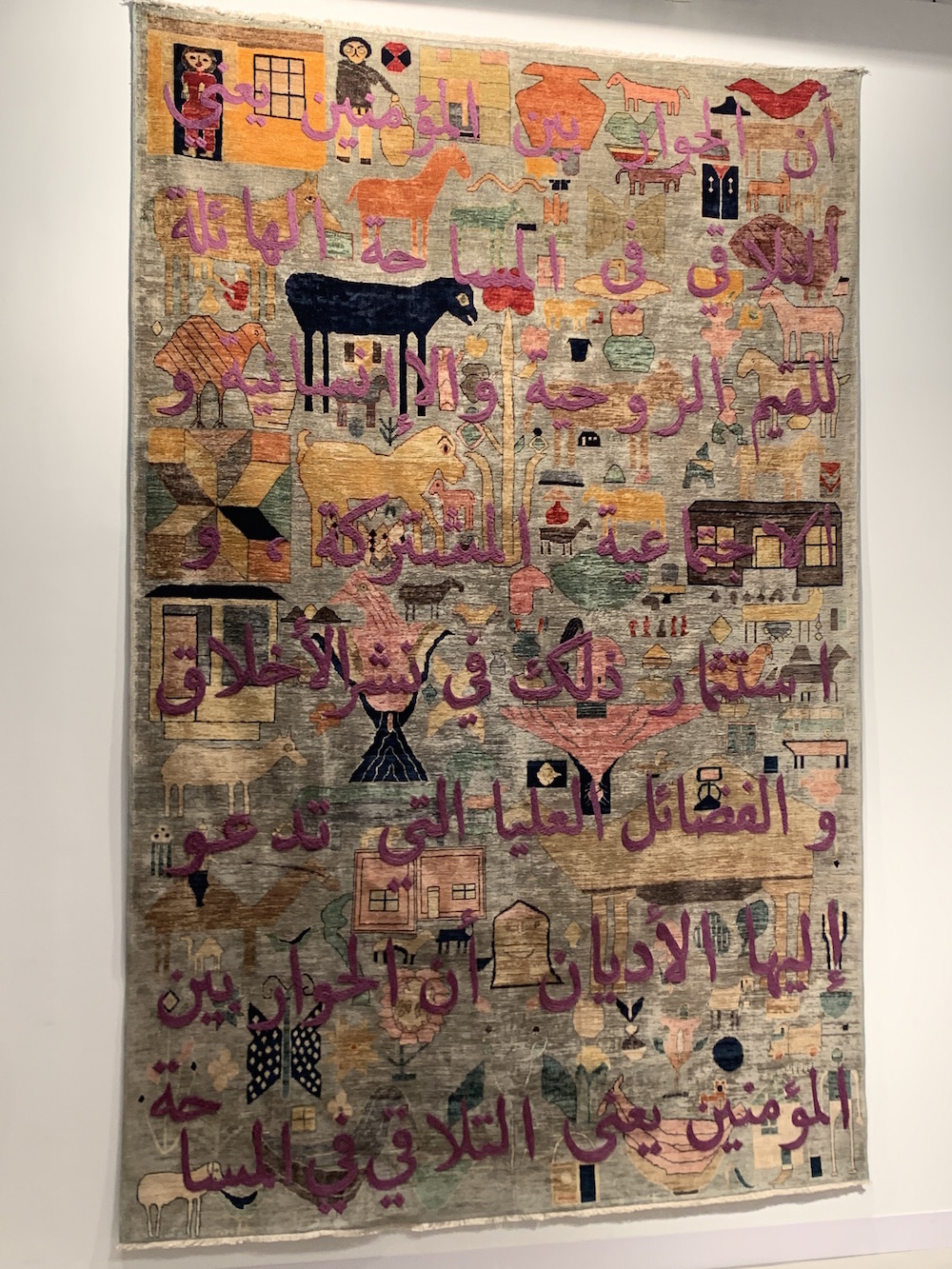