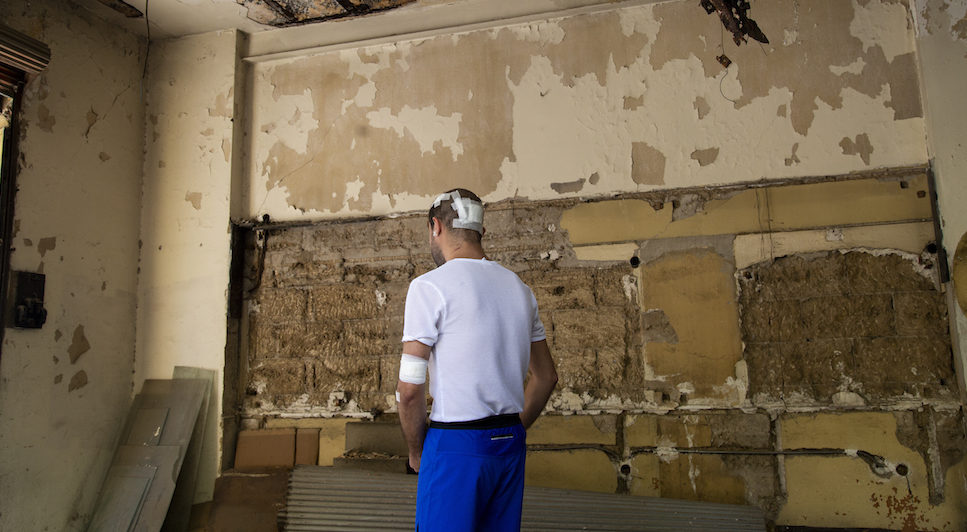 Post August 4th: Words from Beirut and the diaspora

Life will never be the same for the Lebanese people post August 4th and the massive explosion that tore the city of Beirut apart. We collected the thoughts of Sharbel Hasbany, Sabine Boghossian and Eman Al-Alami, respectively in Beirut, Belgium and the US who all shared their stories and their pains: whether close or far, their disarray is immense. 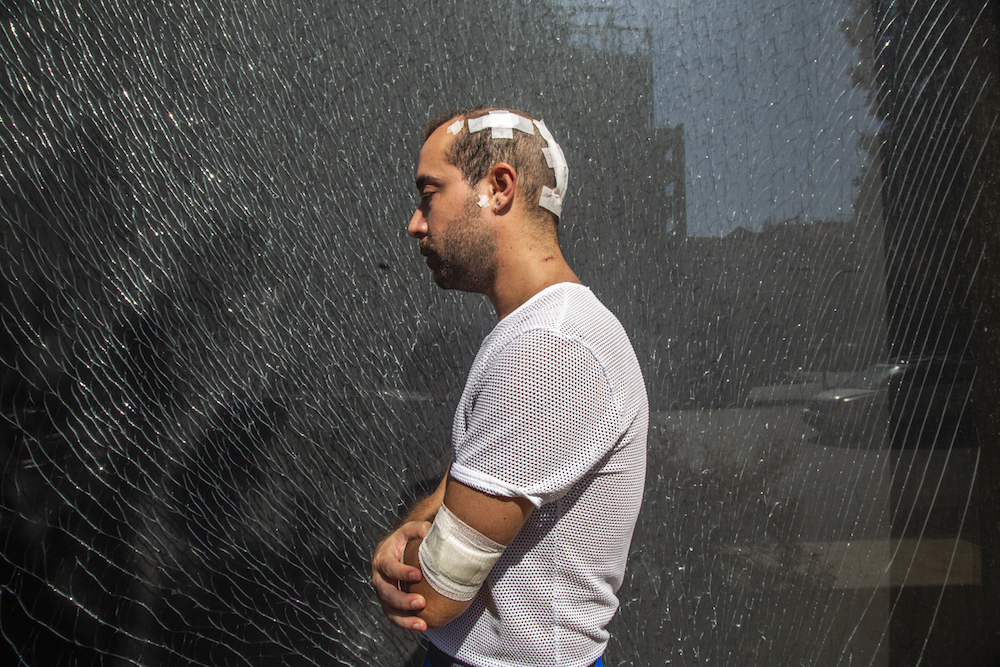 “I was in Urbanista, a café in Gemmayze, having meetings. Around 6pm, I felt something that I thought was an earthquake. And then before we knew, a huge blast took everything on its way. I didn’t understand what was going on. I looked down at my phone: it was covered in blood. Quickly I made my way, walking, to the hospital but 2 were full before I eventually found one that took me in. I really want to thank Bhannes hospital for everything that they did.

The day after the explosion,  I was feeling numb… It’s not an easy thing to digest everything that happened. I was super lost and was having mixed emotions: anger, rage, sadness and guilt in a way as well… guilt of staying alive. I would zone out as I usually do when something traumatizing happens to me. The following days, I didn’t really talk to anyone, but quickly I sought for company and made sure everyone was ok.

Now after almost 20 days, I’m physically almost fully recovered and had a super fast recovery fortunately,  but emotionally, it will take more time. I don’t spontaneously talk about what happened. It’s too hard.

You asked me if I have hope for Lebanon… I don’t want to say I’m the kind of person who doesn’t have hope but I know that some people are tired; most of the people I know are tired of everything. I don’t believe change is gonna happen but I do have faith in the Lebanese people- even if on my side I felt some hypocrisy sometimes.

People need to understand, and I have faith they do, that we can’t continue this way. It’s a individual and a collective effort to work towards positive change. It sounds like asking to live in a fairy tale to simply say that I hope we can live in happiness and joy. We deserve to not live in pressure and horror. So somehow I do have a bit of hope… but I also believe it’s going to take a long while before we see the light at the end of the tunnel.

Sabine Boghossian is a designer, copywriter and food enthusiast.

“I was born and I grew up in Aleppo, Syria and my family settled in Lebanon in 2011 while I have been mostly living in Belgium since.
Lebanon has been the closest place to a home for my family and me since war started in Syria. Like everyone in the Middle East, we’ve been trying to rebuild our lives and to remain resilient despite everything. But today this word seems completely void of any meaning, and that is why I wrote this article. “

Resilience is not a gift.

And if it is gift, then it’s a poisoned one.

We became resilient because we’re bound to tragedy and we hardly have any other option.

Tragedy. Or rather, tragedies.

Some we inherit, some we witness ourselves, and some we live vicariously through the people we love. We grow up to learn how to deal with life only by learning how to manage tragedies. From those we absorb, to those we fight and to those we get haunted by only to pass them onto future generations.

Our minds swing from existentialism to futility while our souls crave for meaning in a maze of aimlessness. We try to stand our ground, to carry on and to fight until we can’t even remember what battle it is that we’re fighting anymore.

We’ve kissed sanity goodbye so long ago that we can’t even fathom what ease of mind might feel like. Like a legacy, a deeply cherished heritage, we preserve and carry our traumas around not knowing how else to live our lives without them.

We weren’t born resilient, no. We have been accumulating centuries of abuse. War has abused us as much as peace has, each in its own way. And like any abuse victim, the only way to keep on living is to forget. So we try to forget. And when we can’t, we pretend to forget to be able to cope.

And when we can’t, we pretend to cope. We can’t afford to feel. We’ve become as numb and as stoic as humanly possible. And if at any time we decide to heal, dear God, then, where do we even begin? Which monster do we fight first? Which energy do we draw upon to remain?

So we keep going on default normalized trauma. Because it’s the only way we know how to survive. Isn’t that the norm?

We don’t want to be resilient. No.

We shouldn’t have to be resilient.

We shouldn’t have to clean debris of blown up streets.

We shouldn’t have to have to call friends and family to ask them if they’re still alive.

We shouldn’t have to have to open the news to see yet another city we’ve danced, lived and loved in go up in smoke.

We shouldn’t have to live our lives in a constant crisis management mode.

We shouldn’t have to keep worrying over constant yet unknown potential threats.

We shouldn’t have to be emotionally abused again and again over our roots and our ties to our lands.

We shouldn’t have to keep assembling hopes and dreams that have been shattered so many times, the pieces don’t even make sense anymore.

We shouldn’t have to accumulate trauma after trauma until self-preservation becomes the only mode in which we can possibly function.

We shouldn’t have to fantasize about peaceful streets, beautiful cities, happy families and normal lives.

We shouldn’t have to…

Eman Al-Alami, thoughts of an Arab-American

The multitudes of the explosion transcended through my television screen on August 4, 2020, my heart trembled, my blood was rising and my eyes welded up, I felt the damage of my body through the repeating videos of the violence up in the sky.

Every time I think about it I feel my heart will sink to my stomach with the spiraling labyrinth of questions my heart asks.

Is my family okay?

Will I lose another part of my family history?

Since the incident, I have not been able to sleep or comprehend it. It is the first time in my early adulthood where I am confronting the struggles of my family history.

I wondered how I could help even if I was thousands of miles away, on the Western hemisphere of the globe other than making donations. Why it happened to them, not me. Why do innocent lives go and I’m still here? I am of the same blood, I look like them, I speak the same languages. I am a child of a family history of Palestinian refugees, who resided in Amman, Damascus, Dubai, Beirut, Cairo, London, Edinburgh, and Los Angeles. The war split us apart. I still have not met most of them and question if I ever will be due to growing political tensions.

You don’t have to be Lebanese or have friends or family who reside in Beirut to have empathy for Lebanon. No amount of suffering is questionable, geography plays no role in heartbreak.

What is happening in Lebanon is far more complex than the tipping point of the explosion. The COVID-19 crisis slowed down the world, many fell ill to a virus we still do not have a cure for yet. The economic crisis is still impacting Lebanon’s economy where 85% of the Lebanese pound fell. The government has collapsed not been in best interest towards the people of Lebanon to protect them during these hard times.

What makes me see the real beauty of Lebanon without ever touching foot on land is the amount generosity and kindness Lebanese people have shown towards one another. There are people giving free plastic surgery treatments, artists putting their work for charity, young people cleaning the streets, free fixations of glass and aluminum of destroyed homes, medics searching for bodies and praying together, people with space in their homes and apartments are allowing the homeless to live with them and many more undocumented acts of kindness are taking place as I write.

The beauty of a nation begins through the genuine hearts of its people.

JDEED organized and Emergency Fund for Lebanon and collected 2000 Euros to help associations on the ground in Beirut. We would like to thank warmly everyone who participated.