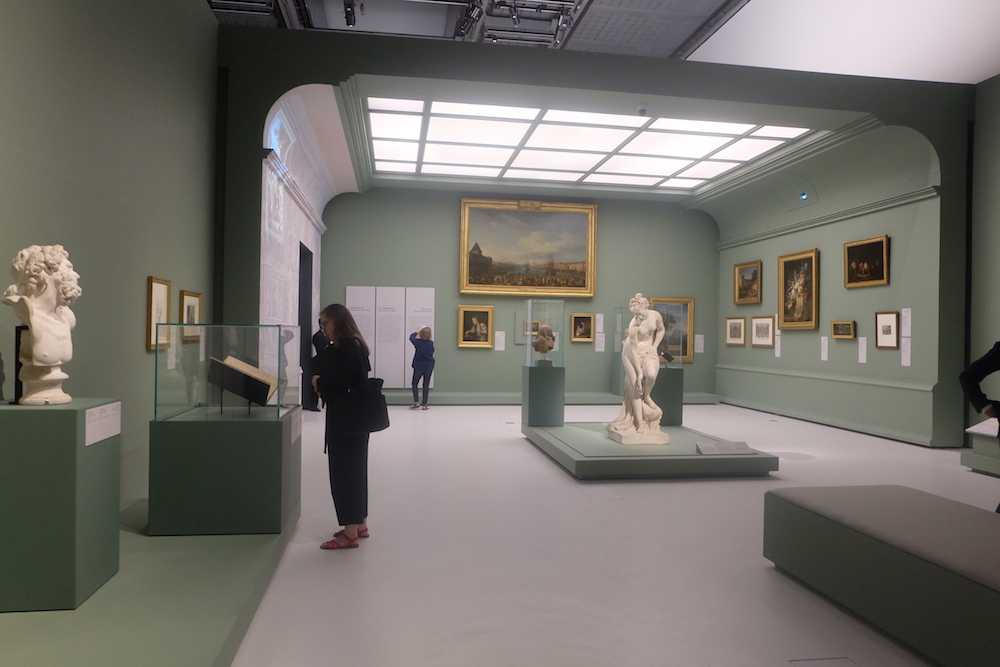 Leen Rihawi, a Dubai-based architect and writer attended “From One Louvre to Another” and “Co-Lab: Contemporary Art and Savoir-Faire” the Louvre Abu Dhabi first two temporary exhibitions’ press preview for JDEED. Here is her report.

A Parisian Icon, there’s more to the Louvre than being that “must see” museum, that all the tourists go to, it’s more than a landmark, more than a home for the Mona Lisa and Venus de Milo, the Louvre Museum has a remarkable story, one that spans before the actual museum opening in 1793. Before the French revolution that aided in it becoming a public museum, it was a home for the “private” royal collection. When it became public, with the intention to provide inspiration for contemporary art, more artworks were added due to wars and confiscation of church properties. Holding collections that span the entirety of human history and geography, the Louvre museum became as we know it a universal museum.

The Louvre Abu Dhabi is the first of it’s kind in the middle east, telling the story of a globalized history of arts. You can hear the pride in HE Mohamed Khalifa Al Mubarak, Chairman of the Department of Culture and Tourism, describing the opening “a momentous achievement of which the UAE is very proud.” “We are dynamic, vibrant and multicultural society, where people live in harmony and tolerance. This diversity is reflected in Louvre Abu Dhabi’s collection”.

The architecture its self stands still in time, sitting under a dome of light in a body of water, one can’t help but feel they’re willingly trapped in a time capsule, suspended in a universal sea of inspiration and creativity.  After its inauguration on November 11 Louvre Abu Dhabi holds its first temporary exhibitions on December 21st. From one Louvre to another and Co-lab: Contemporary Art and Savoir-faire.

From one Louvre to another: Opening a Museum for Everyone.

In short From one Louvre to another tells the story of the creation of the Louvre museum, how it transformed from a royal collection “hidden” in a private palace to a public museum, open to all.  No one could’ve described it better than Manuel Rabate’ , the director of Louvre Abu Dhabi, “The opening of the Musée du Louvre was a transformational milestone in history, It’s significance as a world treasure cannot be underestimated “ . This temporary exhibition will proudly showcase 150 pieces from the collections of the Musée du Louvre and the Château de Versailles. Divided into three sections, the exhibition explores the royal collections at Versailles under Louis XIV, the Louvre as a palace for artists, and the creation of the Musée du Louvre.

Let’s be honest here, most people’s have the same response to visiting classical museums, they are first taken by the beauty of the paintings, the exquisiteness of the marble statues, and the luxuriousness of the jewels, but as they move along most lose interest in the repetitive nature of the pieces, and what starts as a painstakingly “nerdy” journey of admiring each artwork and thoroughly reading each label, turns to a fast paced stride across the exhibition with fewer glances taken with each stride.

It seemed however that the curators, Jean-Luc Martinez and Juliette Trey knew their audience, they’ve fittingly designed the exhibition so each section represents the phase its covering; taking the visitors back in time. Classical music that usually gets played at the Chateau de Versailles fountain can be heard playing across the exhibition, royal colors, blue and red were dominant, even the podiums that the art pieces sat on had an 18th century look to them. The space was simply transitional, it takes you in a journey, makes you nostalgic for an era you’ve never been part of, and each artwork is an important piece of that journey, and tells a story of a time when huge changes were being made to the European art scene.

I really do hope those details come across to the future exhibition visitors, as they are quite remarkable, and an important part to allow them to appreciate the work that has gone into the creation of the “story”.

Curator Juliette Trey was kind enough to proudly take us through the exhibition, we first come across a Painting Allegory of Louis XIV, it was more than just a portrait but a symbolic portrait representing the wealth and bounty of the kingdom that even the most contemporary viewers failed to notice. The painting is a perfect example of the timelessness and modernism of the collection. 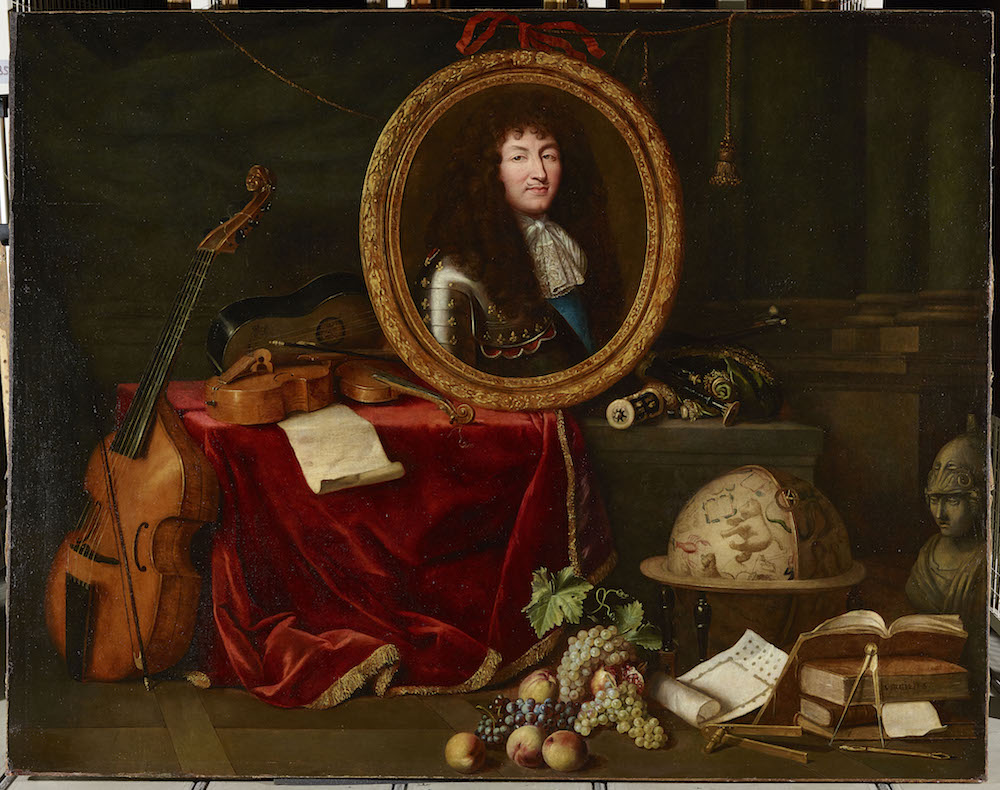 Walking into the “King’s grand gallery” we observe a dominant marble statue in the center. The Diana of Versailles was described by Juliette Trey as one of the pieces that are “best telling of the story of the museum, and it’s universality”, being a gift from one ruler to another, Pope Paul IV to Henri II it had sat in the hall of mirrors at Versailles before getting confiscated during the revolution and moving to the Louvre. 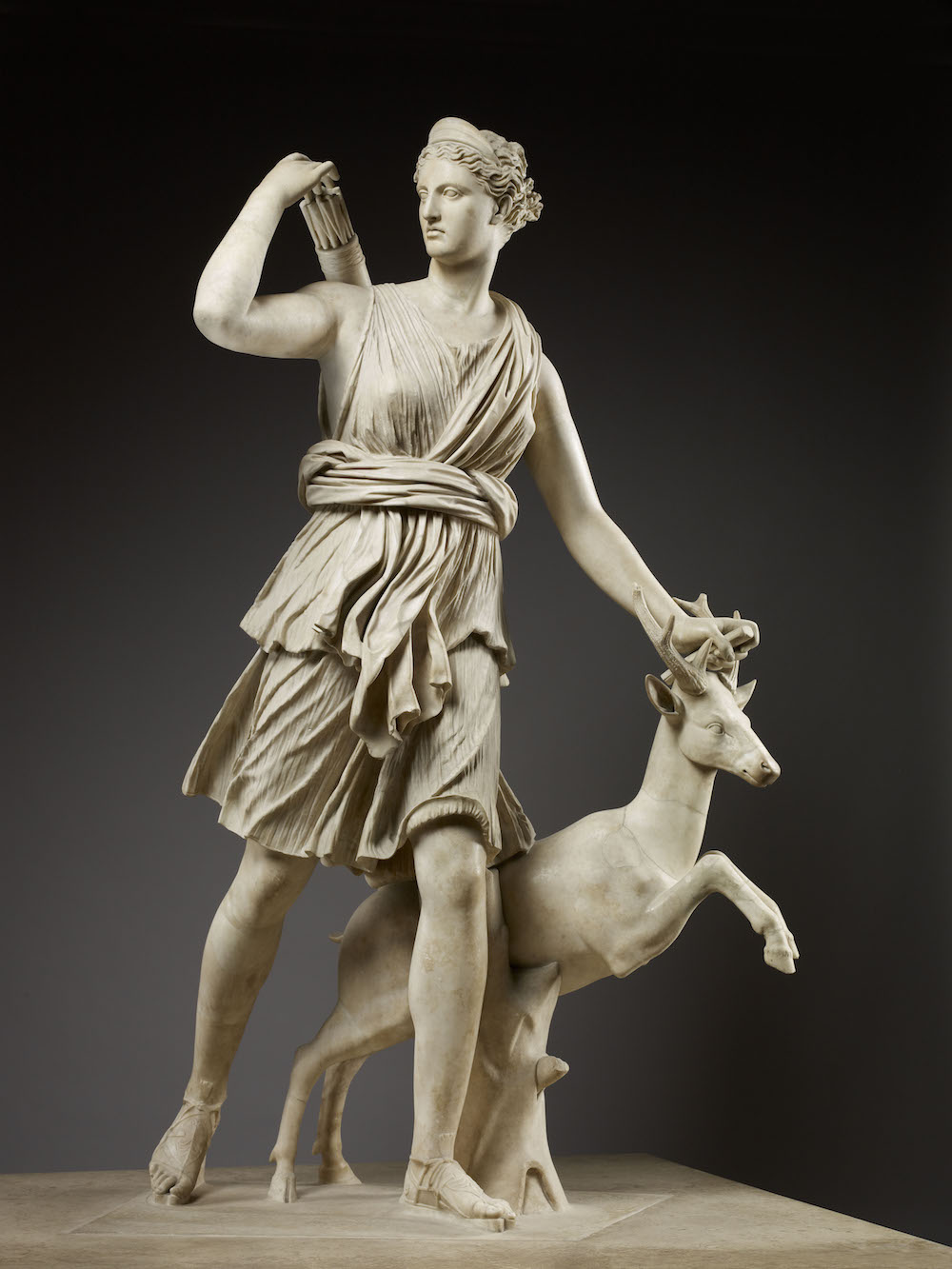 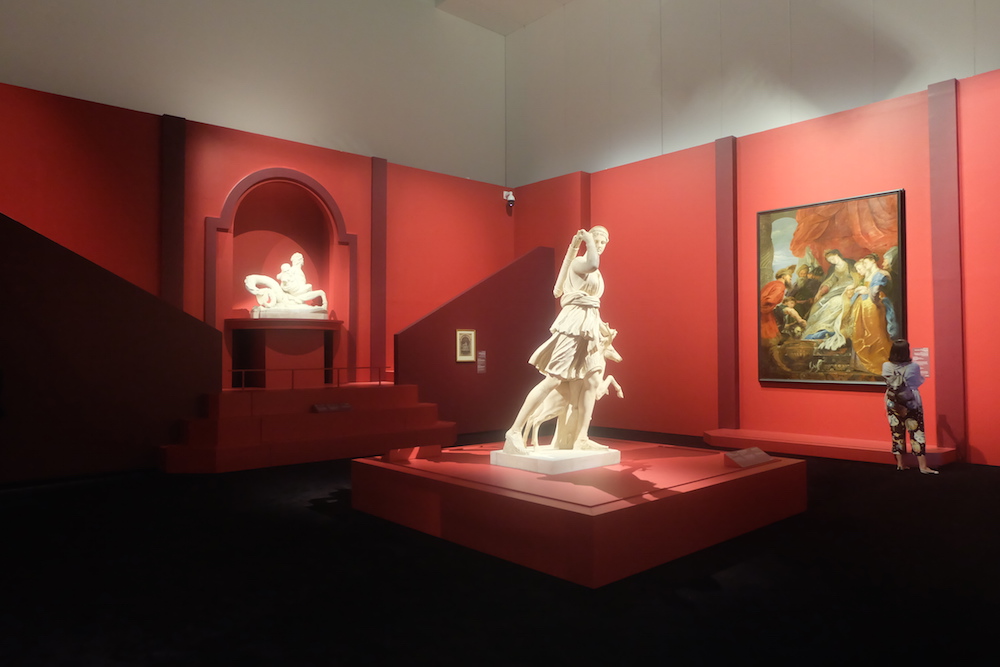 Diana of Versailles sitting in the “king’s grand gallery”

Moving on to the second phase the exhibition transforms into the “artists’ studios” when the Palais du Louvre opened its doors to artist and craftsmen to create and produce. It’s a key time period right before the museum turned public. Where artists collaborated and shared their crafts with each other.

Image taken of the “Artists’ studios” 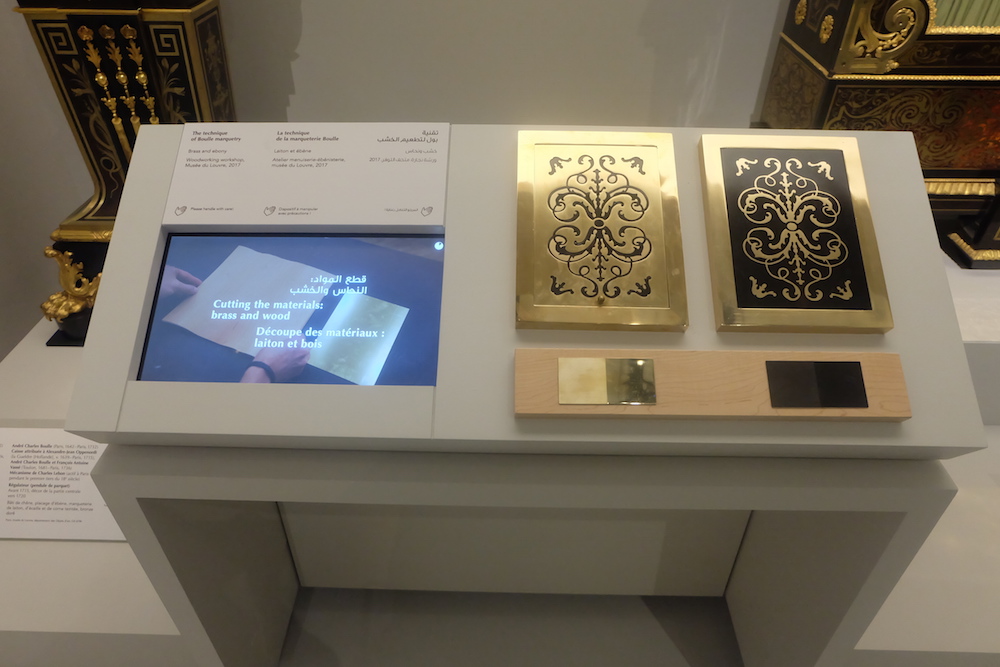 Image of a visual representation of the woodworking workshop

Much like the previous space, the curators want to transform the visitors into that period. With an open, lit space much like a studio, presenting multiple stations with visual representation of the crafts that were explored in the workshops.

A key artwork present in the “studios” is the Creation of the world clock. A gift to an Indian prince that had travelled back to France, it’s a demonstration of sustainable alliances and representation of the importance diplomatic relationships played in the Louvre’s history. The piece is a masterpiece of the 18th century French clockmaking. It is a combination of four complex mechanisms working together to tell different versions of time. Much like the museum it resides in, this piece is timeless and universal. 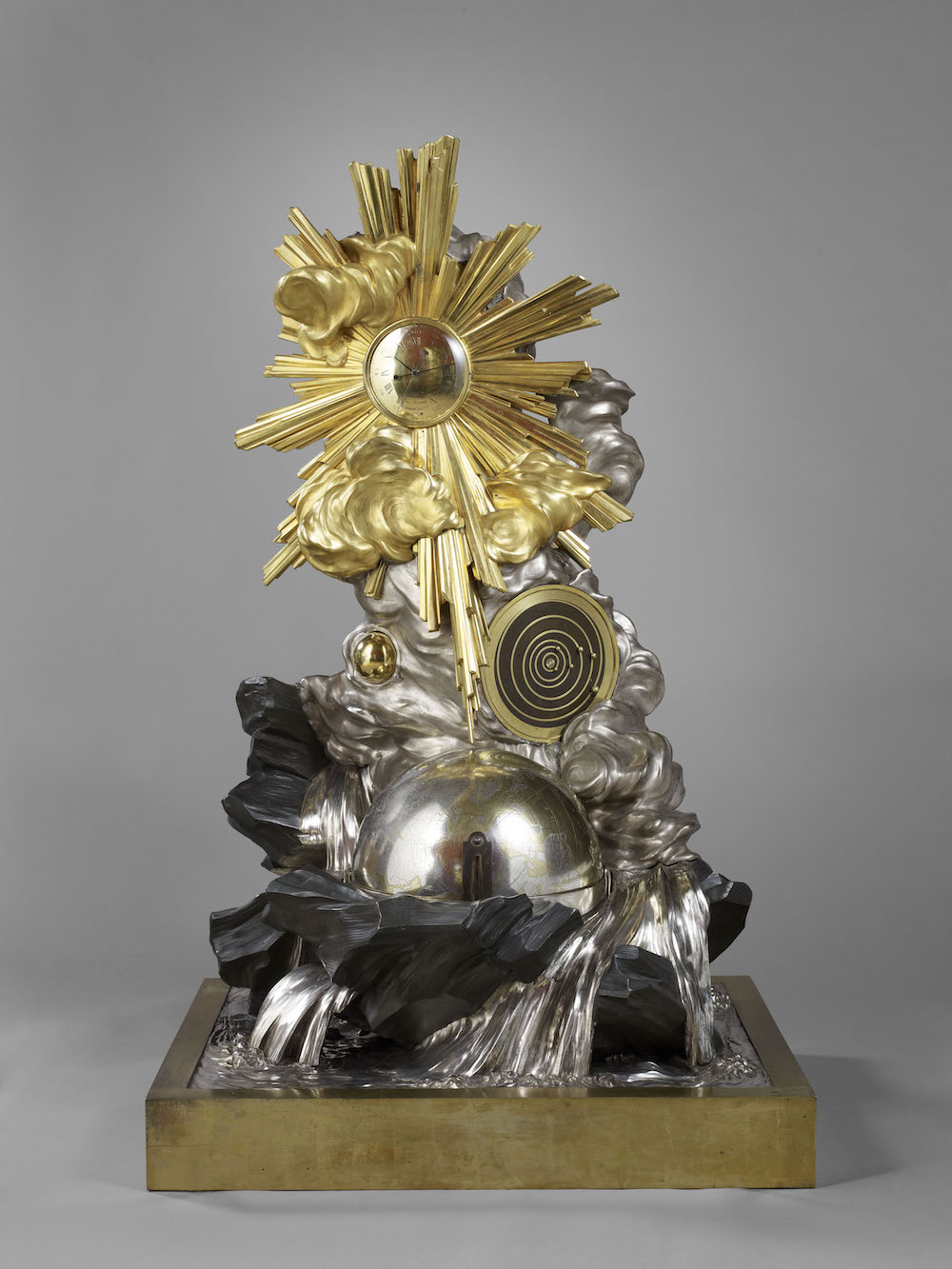 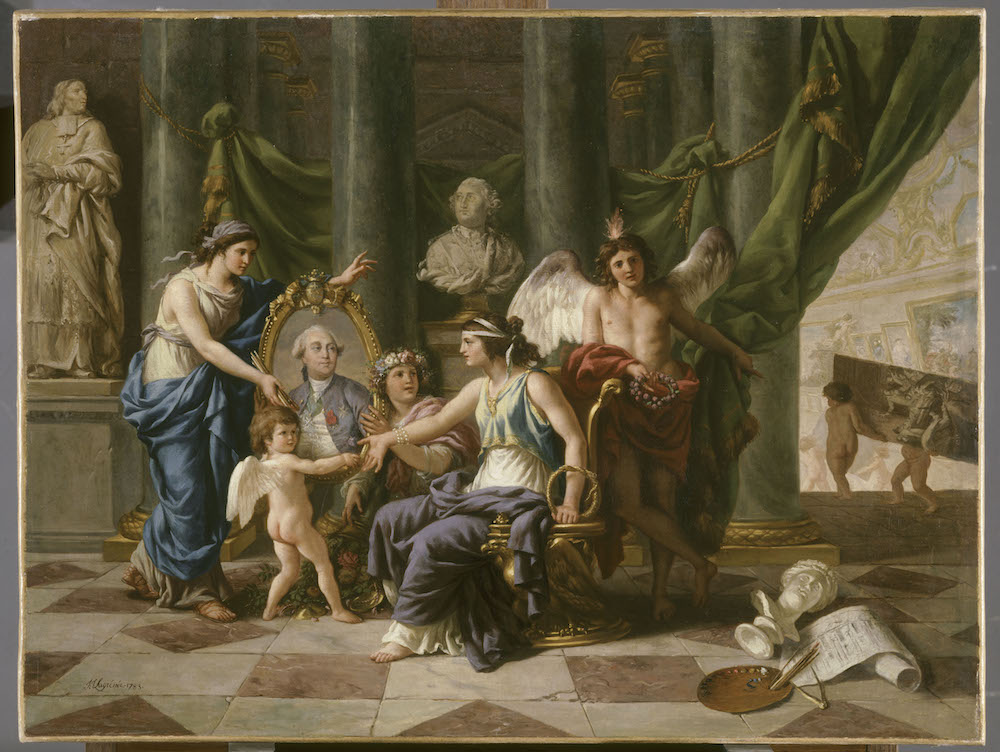 France wasn’t the friendliest neighbor at that time, and wars lead by Napoleon confiscated many artworks (around 5000!) from all around Europe, creating an era of enrichment where the museum became the largest in Europe, holding the biggest collection there is. It didn’t gain its universal museum brand until the 19th century, when it opened it doors to other cultures; as a result of archeological excavations and anthropological expeditions. It became a pioneer in its universal vision; museums don’t exist for the benefit for the citizens of a particular nation but for the inhabitants of the world. 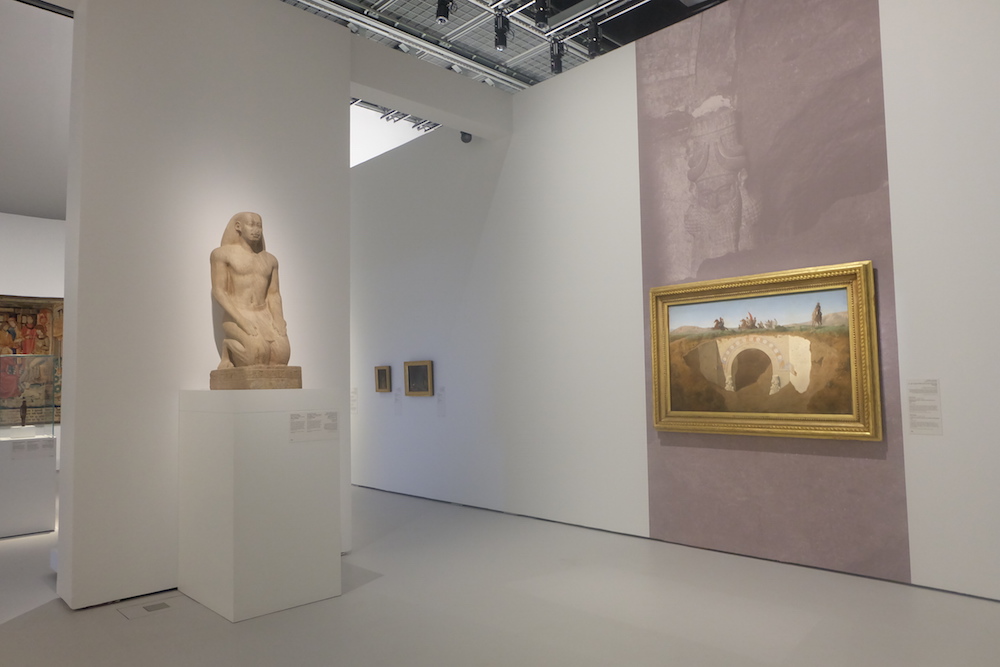 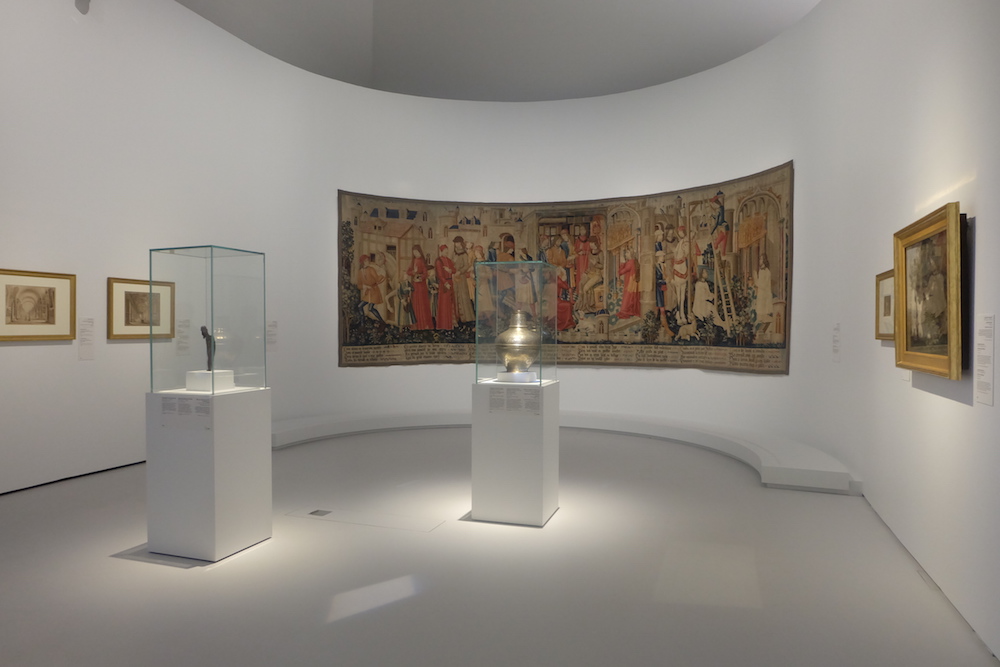 Co-Lab is a result of a unique collaboration between UAE and France, the fruit of The Emirate-French cultural program that brought together French expertise with local talent. Four UAE based artists, Khaled Shafar, Talin Hazbar, Vikram Divecha and Zeinab Alhashemi collaborated with 4 French manufacturers during the span of two years, to bring together their final product into the Louvre Abu Dhabi.

Manuel Rabate, Louvre Abu Dhabi director, described it best. “The UAE is home to a vibrant community of artists, designers and contemporary practitioners, and these four artists are amongst the most talented in the country. At a time when artists around the world are rediscovering and incorporating the rich history of craftsmanship and traditional artistry into their practice, Co-Lab: Contemporary Art and Savoir-faire is a platform for creative exchange and discovery.”

Curated by Alia Zaal Lootah, the four collaborations fall under the theme of time. Lootah perfectly summed up the exhibition “This marriage of skills has resulted in true mutual inspiration, each partner learning from the other, and the results are unique. We look forward to sharing them with the public, and hope to inspire up and coming artists and designers to explore new techniques and collaborations.”

Talin Hazbar, who is a constant in the UAE art scene, has always worked with vernacular materials. Her collaboration with Sevres allowed her to dive into the world of ceramics and porcelain to create her final piece Transient. Collecting sand from three different archeological sites in the UAE (yes, she did in fact do that, I’ve followed her journey on Instagram), she had undergone multiple studies to further understand nature, culture and impermanence. The sand was also used a medium to encapsulate the porcelain as well as in the process of making the porcelain vessels, through different methods. “Transient marries those two materials in a revered relationship. The artwork questions, on a wider scale, our relation to history, memory and the understanding of time” Hazbar (2017). 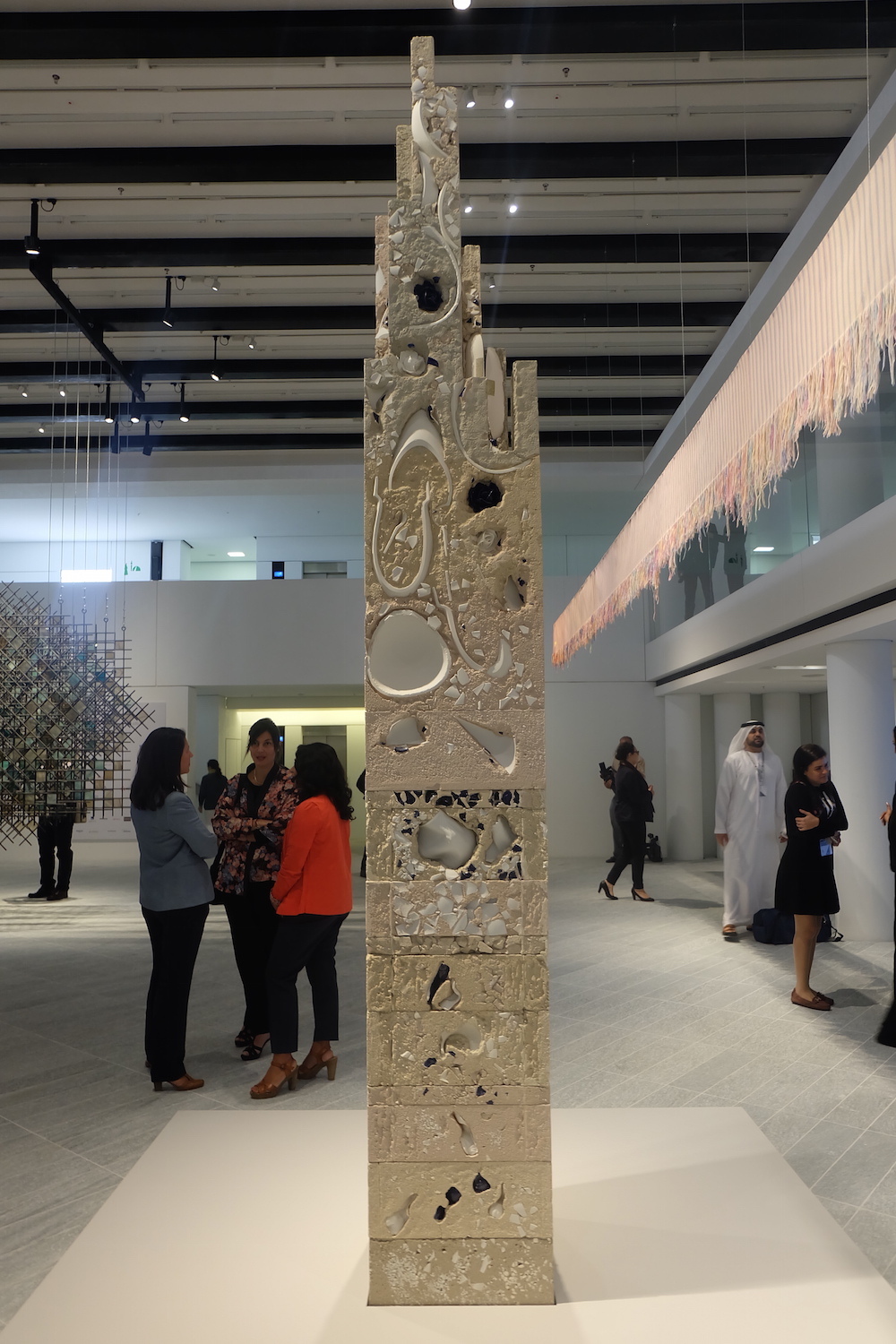 Khalid Shafar, another staple in the UAE art scene, had collaborated with the weaving art of Beauvais, to create Chromachron or woven year. “A tapestry that explores the relationship between time and color. Using 144 unique colors from the library of Gobelins, Woven year aims to set a new methodology of calculating and translating hours, days and years by colors.” Shafar (2017). Khalid created an incredible piece that weaves different colors to make 24 hours then keeps repeating to complete 365 days, a year. He had taken the concept more literally than Talin, and created his own version of a “watch”. 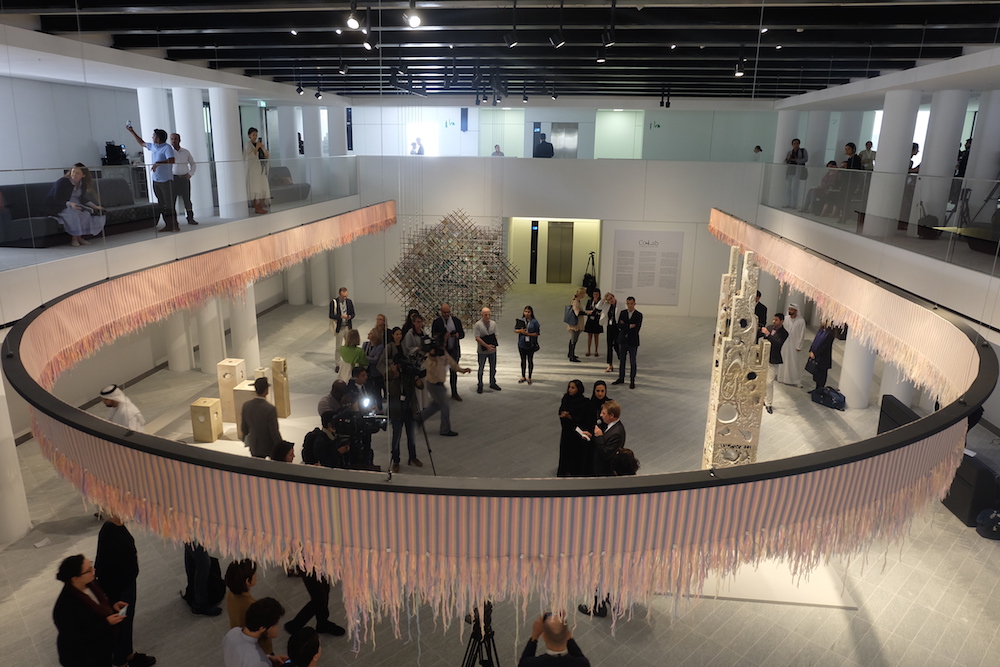 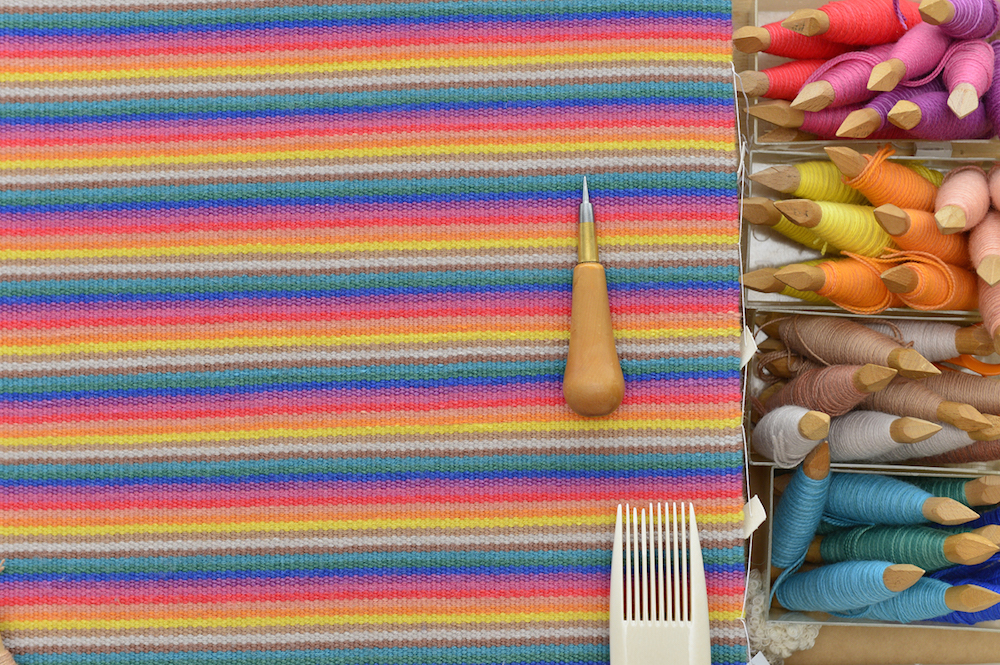 Vikram Divecha created Train to Rouen with MTX architecture embroidery. His piece is an abstract representation of how we perceive time. By creating a 5 min delay of a train from Paris to Rouen (with the support of the French National Railway Corporation),thus creating a ripple effect that was registered on the “traffic occupation chart”. The piece also plays homage to Monet’s The Gare Saint-Lazare (displayed at the Louvre), who (in typical artist fashion) also desired to delay a train by half and hour. For better light!

Vikram also had a film recorded at the train station of the 5 min delay. Personally I don’t think he needed to show that, his piece stands well on its own and tells a better story, that film only succeeds in creating a distraction from the art piece. 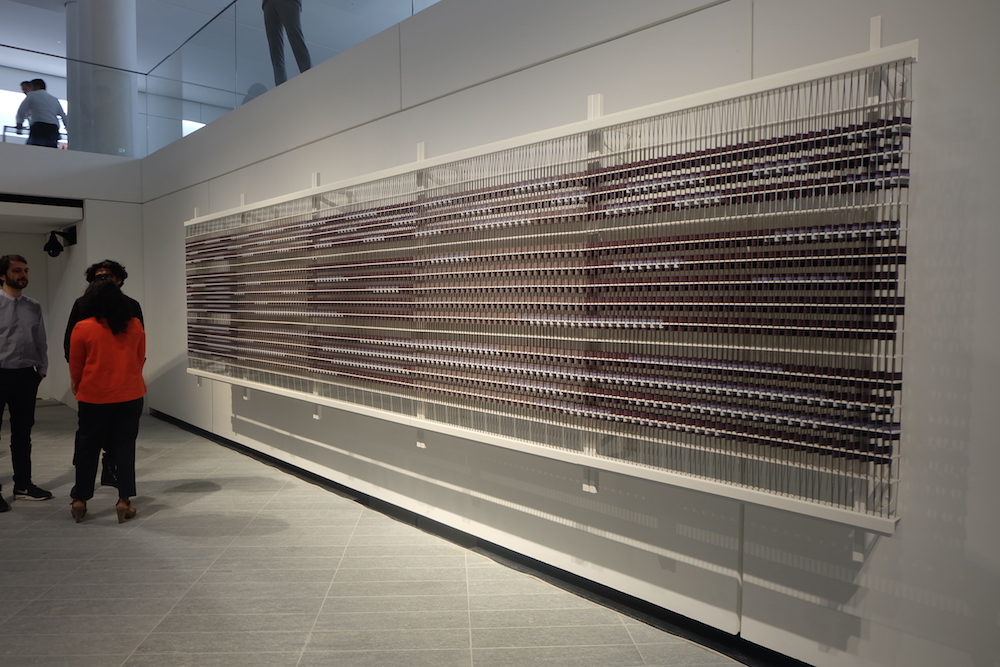 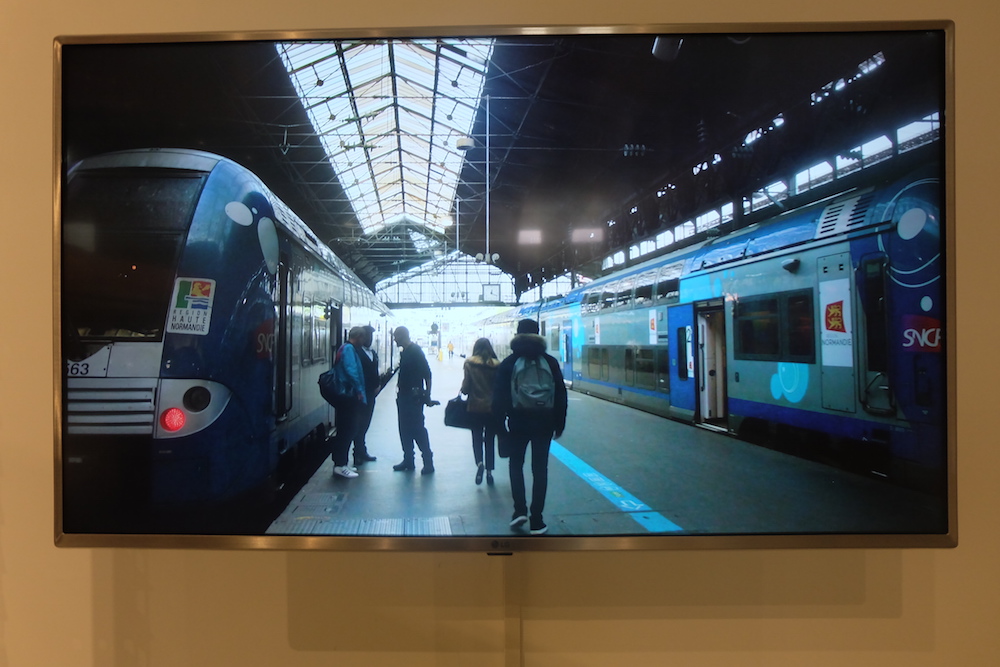 A still shot of the film

The final talented artist is Zainab al Hashemi who created Metamorphic with Saint-Gobain, inspired by Saadiyat and its colors and “Mixing Saint-Just’s glass techniques and metal fabric, this artwork translates the visible interaction between organic and industrial materials, between the natural and the manufactured”Al Hashemy (2017). Between all the works presented this felt the least embracing of the theme of time, it felt more geographically driven. But regardless of that, her process and talent comes through. Using the color palette of the Saadiyat Island, the glass squares “mirror “the natural colors found in the island and fall within 8 steel rebar grids, alternating in direction. 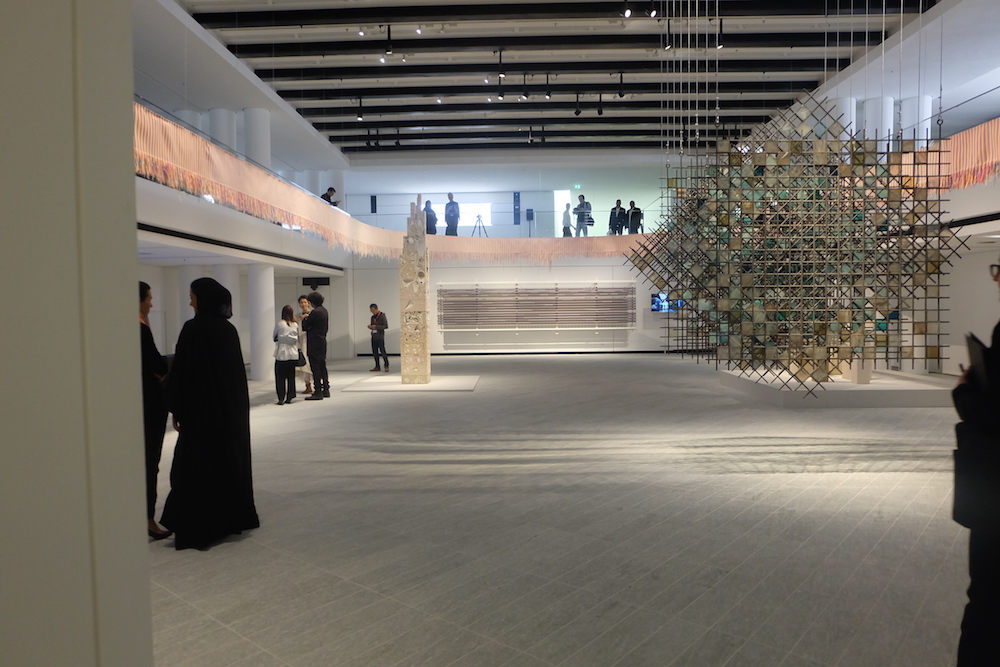 Whether you are a true art lover, an art “Instagrammer” or someone who gets dragged by their significant other, you will find something to enjoy in both exhibitions. So make sure to catch From One Louvre to Another: Opening a Museum for Everyone before 7 April 2018 , and Co-Lab: Contemporary Art and Savoir-faire running until 25 March 2018.