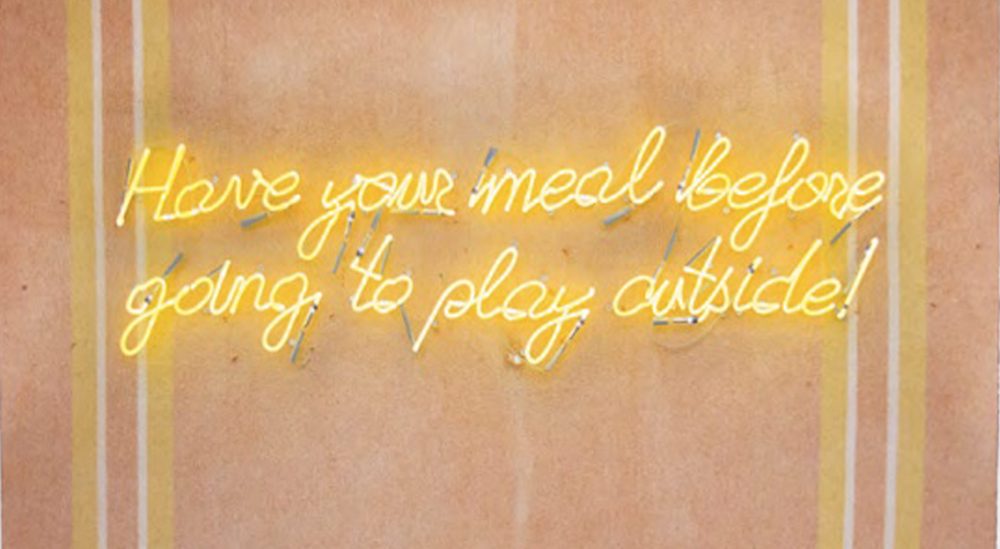 It’s this time of the year again- Art Dubai is opening its 12th edition this March 21st, Held under the patronage of His Highness Sheikh Mohammed bin Rashid Al Maktoum, Vice President and Prime Minister of the UAE and Ruler of Dubai. This year’s fair is the most globally diverse to date welcoming a variety of exhibitors from all over the world and premier a new gallery section, alongside a wealth of programming and talks around art and beyond. Indeed, it’s an impressive number of 105 galleries from 48 countries that are exhibiting across the Contemporary and Modern halls as well as its new section Residents.

In terms of figures, the Contemporary Hall comprises of 78 galleries from 42 countries with the first ever participation of Iceland, Ethiopia, Ghana and Kazakhstan while the Modern Hall, for its 5th edition, is featuring 16 galleries from 14 countries and introduce, for the first time, collective exhibitions, in addition to solo- and two-artist shows.

As per the Global Art Forum, seeing here its 12th edition, it returns with “I AM NOT A ROBOT” exploring the very 2018’s theme of automation.

Myrna Ayad, Art Dubai director expresses: “Once more, Art Dubai reaffirms its position as the platform representing the Middle East, North Africa and South Asia, where initiatives are formed or announced, artists’ careers launched onto the international stage and where new partnerships and discoveries are made.”

For the first time this year, the Residents program is opening at Art Dubai, with 11 international artists who traveled to the UAE for a 4-8 weeks residency split between Tashkeel and in5 in Dubai and Warehouse421 in Abu Dhabi. The artists beneficited from their time in the country to meet, exchange and produce a body of work that was inspired by their experience in the UAE and their vision of it.

JDEED has toured the fair and made its selection of Arab-World based galleries. Follow the guide.

The Tehran-based gallery established in 2014 aims to push the professional development of artists and arts professionals in their city and globally as well as encouraging the production of artistic practices that would both challenge the artist and establish new ways of interaction between them and their public.

Amongst the exhibited artists such as Reza Aramesh or Avish Khebrehzadeh, we particularly retained the works of Reza Abdini and Sanaz Mazinani. 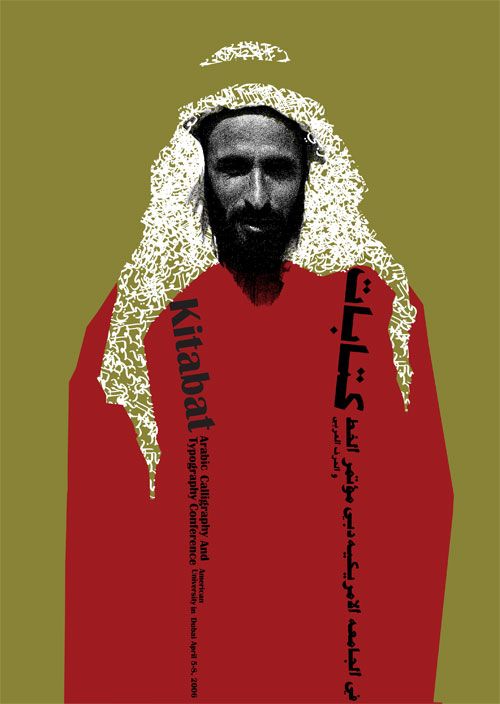 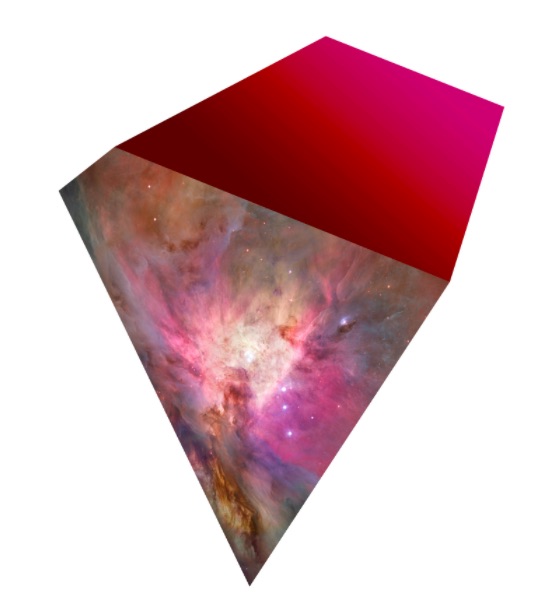 Founded in 2009 by Hamza Serafi and Mohammed Hafiz, Jeddah-based ATHR is one of Saudi’s most renowned contemporary gallery and space.

Ahmed Mater, an eminent figure of contemporary Saudi Art is exhibiting alongside 13 other artists such as Central Saint Martins’graduate Dana Awartani.

Nasser Al Salem’s neon installation inevitably attracts the eye confirming our (and the public’s) enthusiasm for this medium. 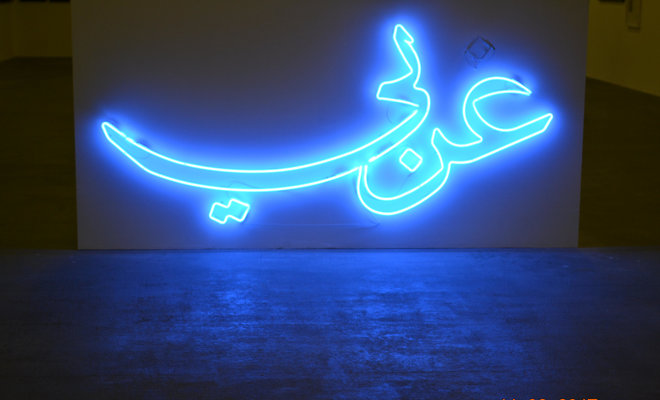 Established in 2008, Carbon 12, located in the no-need-no-introduction-no-more area of Al Quoz in Dubai has been an effective promoter of emerging artists to the UAE scene, engaging the public in different activities throughout their 5-7 yearly exhibitions.

Persian artist Sara Rahbar’s work stands out with her piece Due Unto Others. 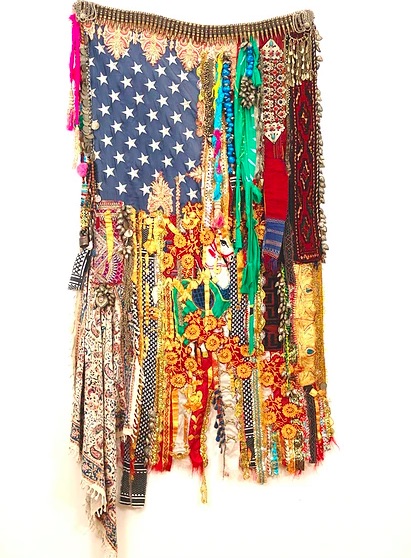 Originally founded in Tunis, Elmarsa gallery opened in Dubai in 2015 with the same objective, as to know promoting North African modern and contemporary artists.

Exhibiting artist Omar Bey’s Labyrinth, made of Shisha Pipes and ink doesn’t fail to meet the description of Bey’s work whose innovative command of material has enabled him to « evoke surprise, humour, and contemplation in viewers ». 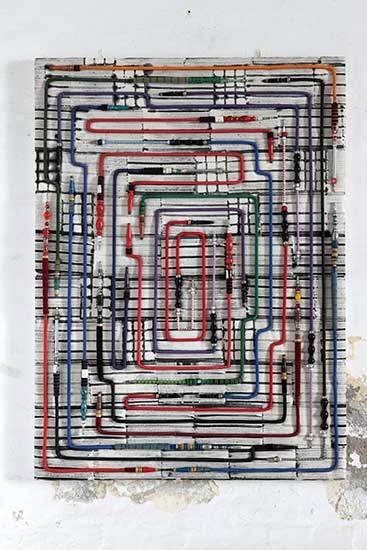 Gazelli Art House opened its doors in Baku, Azerbaijan’s capital city in 2003, holding, at the time, exhibitions of Azeri artists. They have since establish a London-based gallery. Exhibiting artists include the Russian collective Recycle Group as well as two of JDEED previsouly featured artists Orkhan Huseynov and Farhad Farzaliyez whose « Granny’s Series » presenting neon-shaped sentences evokes nostalgia by combining the universal vocabulary of grandmothers and the local Azeri culture of textile production, massified during the Soviet era. These rugs, carpets and table cloths now support neon phrases such as ‘Why are you so skinny – haven’t you been fed at home?’, ‘I’ve washed some figs, why are you not eating?’, ‘Don’t run! You will be sweating!’. 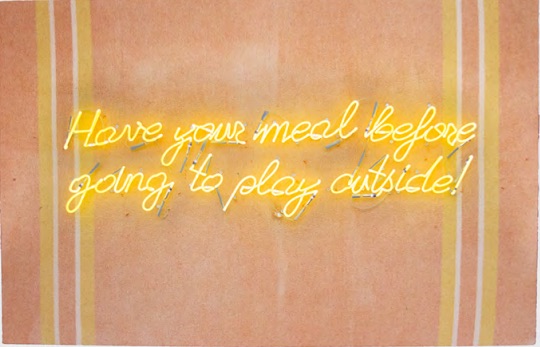 Samar Martha founded Gallery One in Ramallah, a gallery that represents and promotes established Palestinian artists living in Palestine and abroad. Gallery One with its exhibition space, tries to establish a new relationship between the public and the artist, in a usually non-profit art sector witnessed in Palestine and the Middle-East. Gallery One’s sole exhibited artists at the fair is Amer Shomali with his Broken Wedding series presenting DMC embroidery floss mounted on wood. 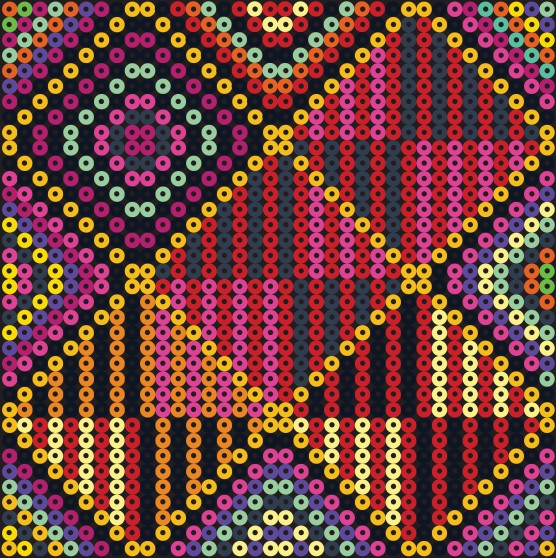 More about Gallery One here