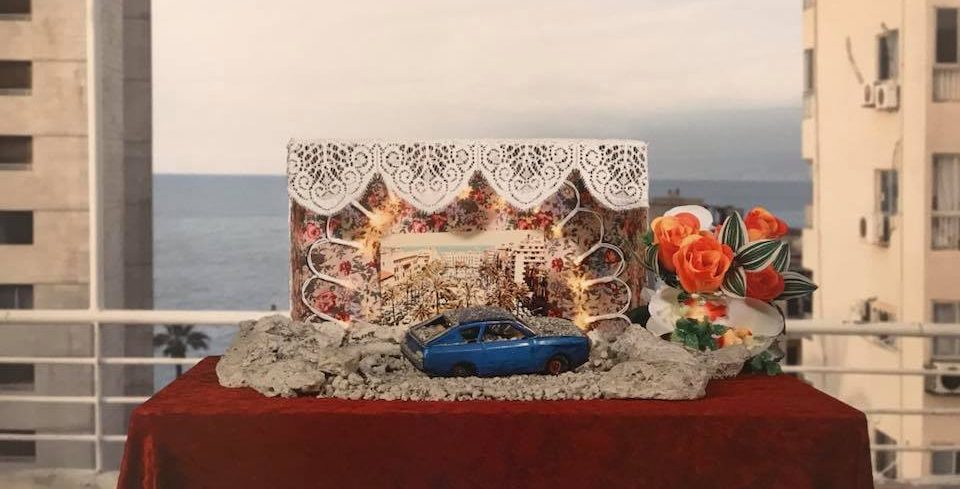 “Absence Presence” : Remembering the missing people of the Lebanese Civil War through art

The gallery Art on 56th in Gemmayze is currently holding an exhibition names “Absence Presence” sharing the artist’s memories of the Lebanese Civil War. 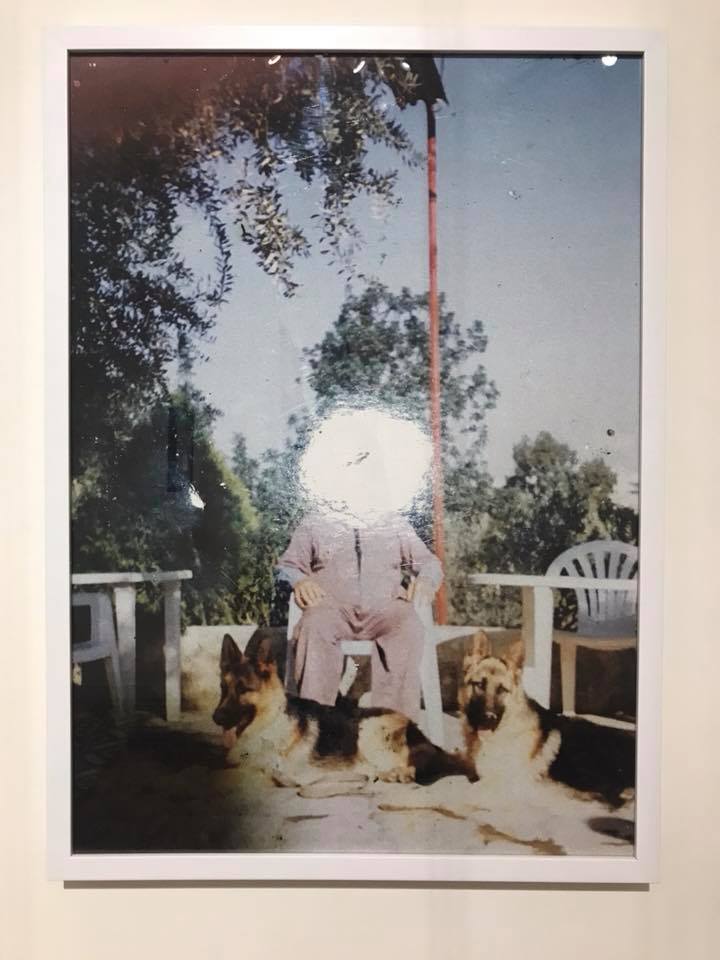 Maria Kassab, “The Last Photograph Before the War”

Curated by Lea Vicente for the International Committee of the Red Cross, present in Lebanon since 1967, “Absence Presence” retraces the memories of “the missing persons of Lebanon and those who are left behind.” The exhibition aims to raise awareness on the engagement of ICRC to defend the passing of a law on the missing.

Disclosure “The missing file is one of the last concrete chapters hindering the closure of the Lebanese Civil War. The Law on the Missing will establish a solid base for a humanitarian mechanism to give long-waited for answers to thousands. The law has passed Committee of Justice and Administration and awaiting ratification. The International Committee of the Red Cross requests that the Lebanese Parliament passes the Law on the Missing and gives closure to the families living in a state of interrupted grief.”

Maria Kassab, Tanja Van Deer, Hussein Nassereddine, Julien Bonnin, Natalie Naccache and Patrick Baz are the 6 artists who are part of the initiative. The first four have explored their memories through their senses, the exhibition being designed “to show how each of the five senses, when impacted by [such a] trauma, becomes fiercely obsessional and volatile (…)”

With “She Liked To Name Flowers, He Liked To Stop The Time” Nassereddine focuses on oral traditions that are confronted with personal belongings, exhibiting covered objects that are brought to life through a recording of narrations. The conversation is passed on several story tellers which accentuates the history of these memories. 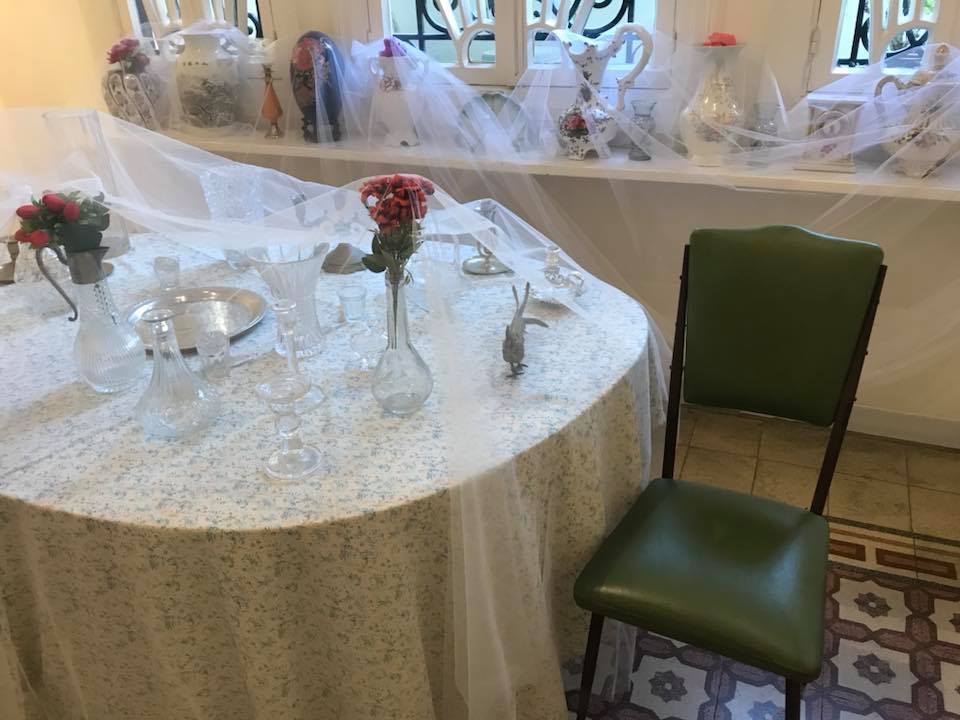 Hussein Nassereddine, “She Liked To Name Flowers, He Liked To Stop Time”

Julien Bonnin’s “Relics” explores the “origin and dissemination of old photographs” while trying to comprehend the tensions between “their aesthetics and the weight of the stories of the missing person.” Results an installation of folded photographs, the corner of a salon, a souvenir box: Bonnin suggests that we might not always have a clear but rather biased and distorted vision of our souvenir’s reality. 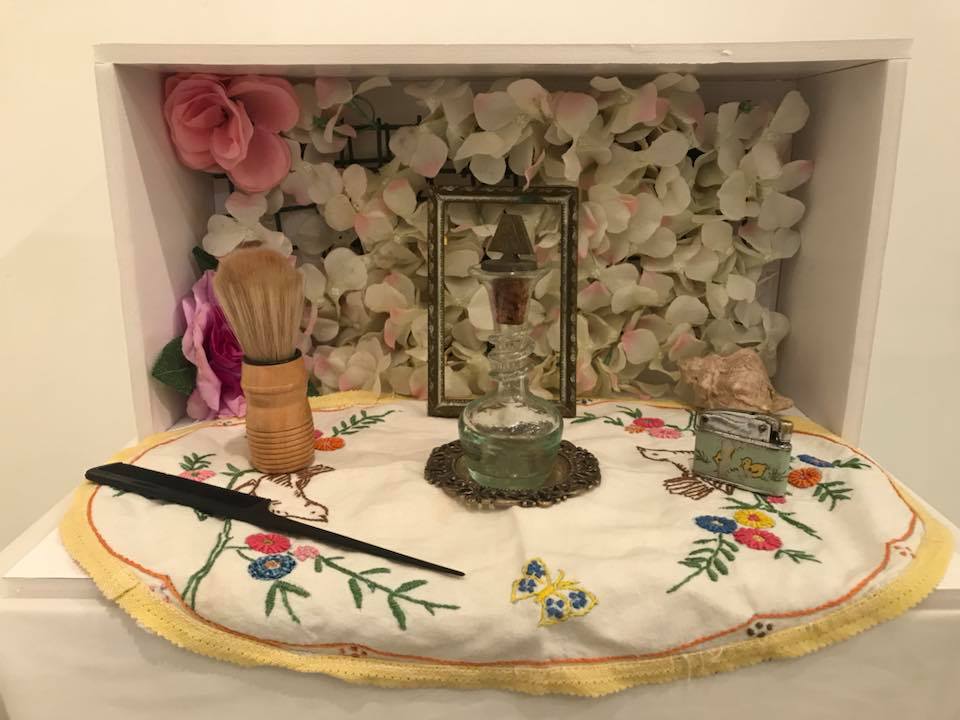 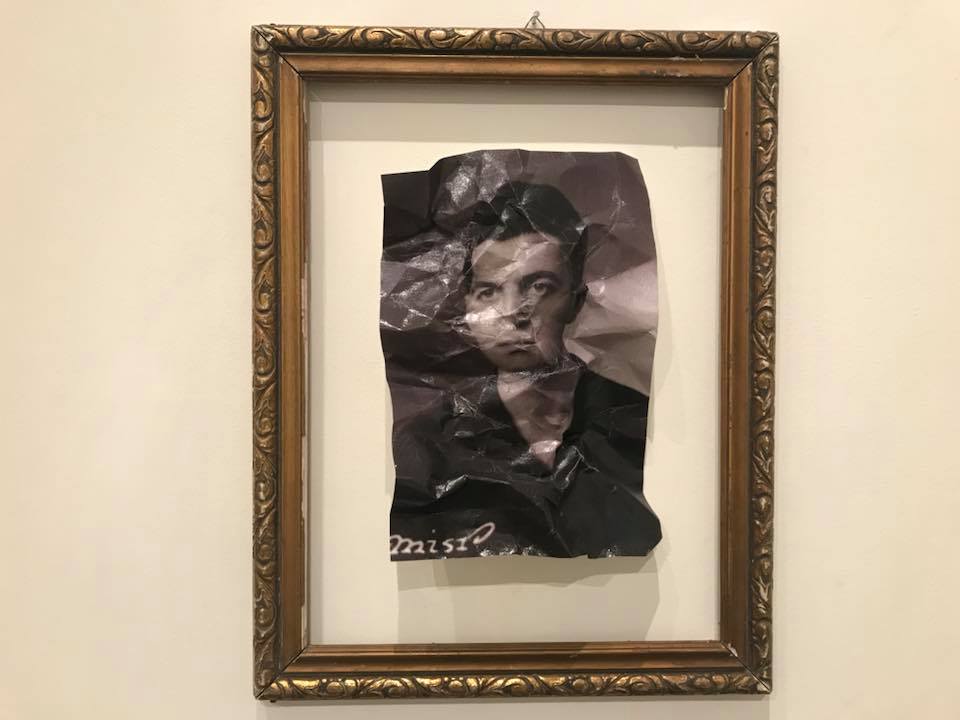 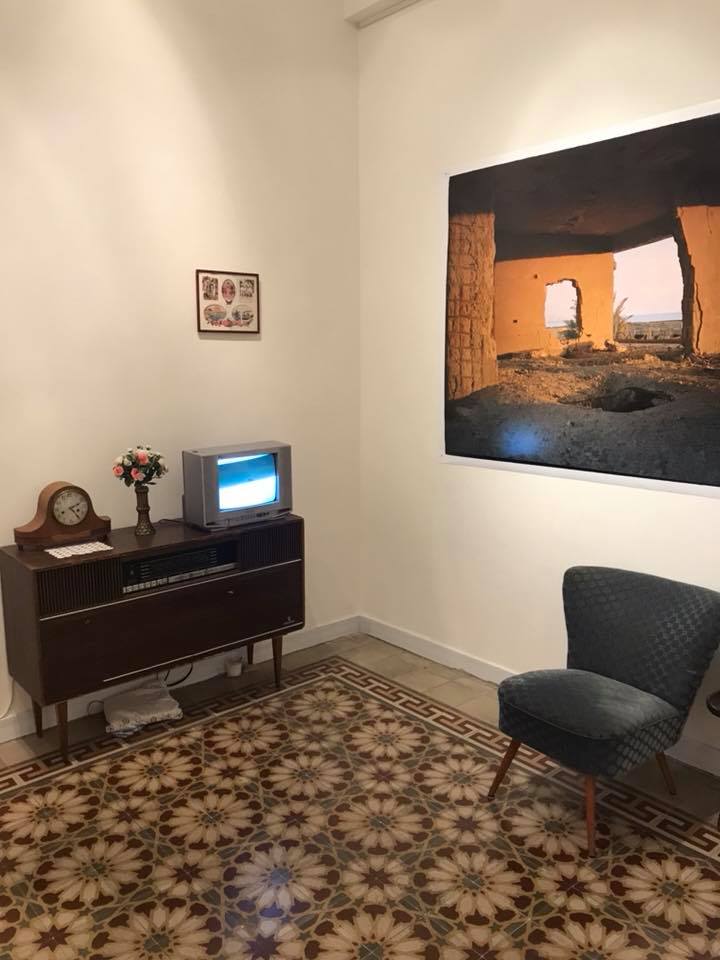 As per Tanja Van Deer, she has created an installation called “Um Ayman” (Ayman’s mother), taking place in a reconstructed kitchen where the voice of this mother tells stories about her gone son and opposes the delicacy of the souvenir to the pain it inflicts to have to deal with remembering someone for 38 years and counting. The whole artwork is so charged with emotion, you feel as if you were transported in Um Ayman’s memories, as if Ayman was someone you knew too. 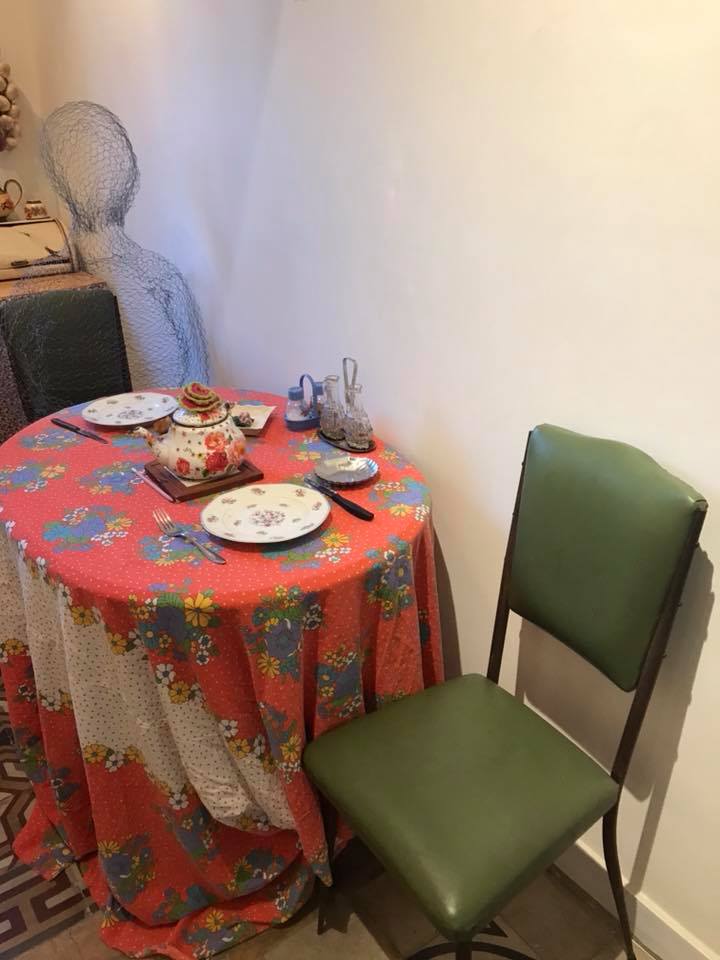 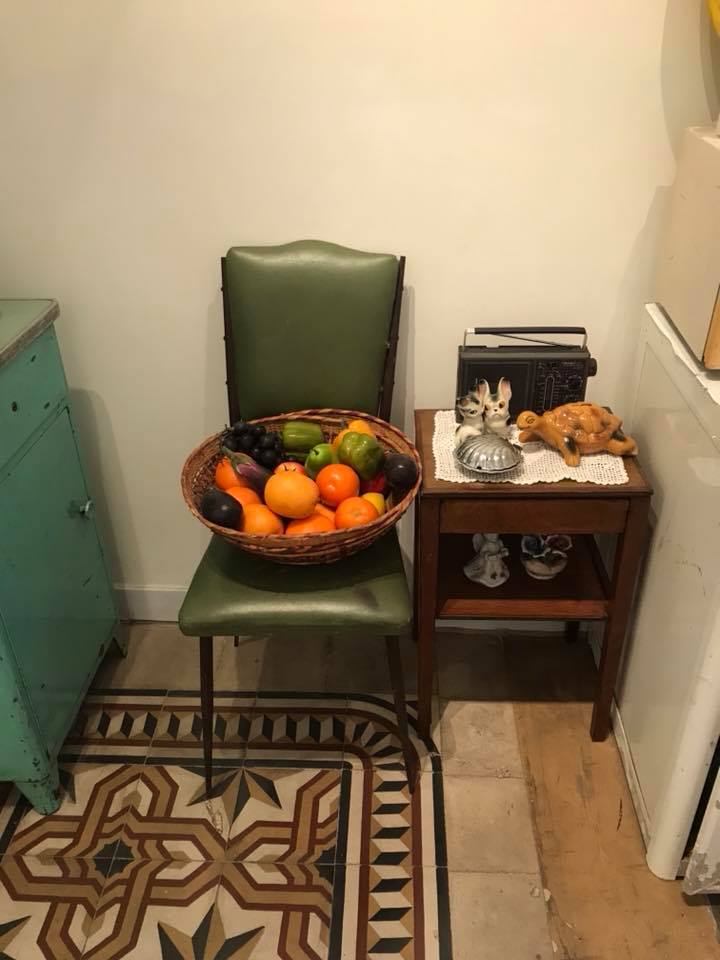 There’s a real heaviness that occupies you as you go around the exhibition whereas you might have endured the ache of living with the relic of a missing loved one yourself or just by putting yourself in these sufferer’s shoes. There’s love, too, that submerges your heart, the love that each and everyone of us has once felt, the love received from a caring mother, companion, brother. This mix of emotions is so well showcased throughout “Absence Presence” and would leave any viewer pensive.

JDEED approached the curator, Lea Vicente, to know more about how has the curation process gone and why she has chosen these specific artists:

“When we have started thinking of the exhibition that would revolve around the people who disappeared during the Lebanese Civil War, we were encouraged to do something innovative, which I really appreciated since I love working with young artists and contemporary artists who experiment with different medium.

While looking for artists and conceptualizing the exhibition, I thought it would be interesting to touch people in the most obvious way possible. I figured that everyone has their own experience of their memories through the 5 senses and that’s one of the asset of contemporary art: to be able to experiment around these 5 senses and to have multi-sensory artworks. That’s how I started thinking of which artists I wanted to collaborate with. It really mattered to me to have these 4 artists [Bonnin. Van Deer, Nassereddine and Kassab] with very different backgrounds who are young and have their own lecture of the Civil War’s history which is not always the same from one person to the other. All of them work with multiple medium and propose something that is quite innovative.”

Vicente goes on about the reasoning behind this senses-oriented choices, explaining the ambition to cater to a youthful audience:

“The goal of this exhibition was to attract a new public that the one that usually goes to NGO exhibitions, which is a rather older one. For this one, the Red Cross wanted to touch a younger crowd and I therefore thought about what talks to these young people, as to know accessible things that carry them away through strong visuals, audio works, but also with the senses of touch and smell. We wanted to raise awareness amongst a wider public, specifically with the ludic aspect of the exhibition.”

Nassereddine doesn’t limit himself and works with installation, writing, image and video. Based of his own analysis and personal comprehension, his works reflect on collective histories and resources on poetry, ruins/monuments, construction and image making questioning historiography, authorship, preservation and material sources. Hussein has participated in the Home workspace program at Ashkal Alwan in 2017/2018 and in the BeMa residency in Jezzine in 2017.

Tanja says of her work that it is a “playground for the verbal, the visual and the visceral.” Tanja has notably been awarded the “World’s Biggest Student Art Show” by Adobe Photoshop and Colossal Media for her digital art piece “I’ve Got Love Handles (But I Can’t Handle Love)”

“Absence Presence” is on until September 6th 2018