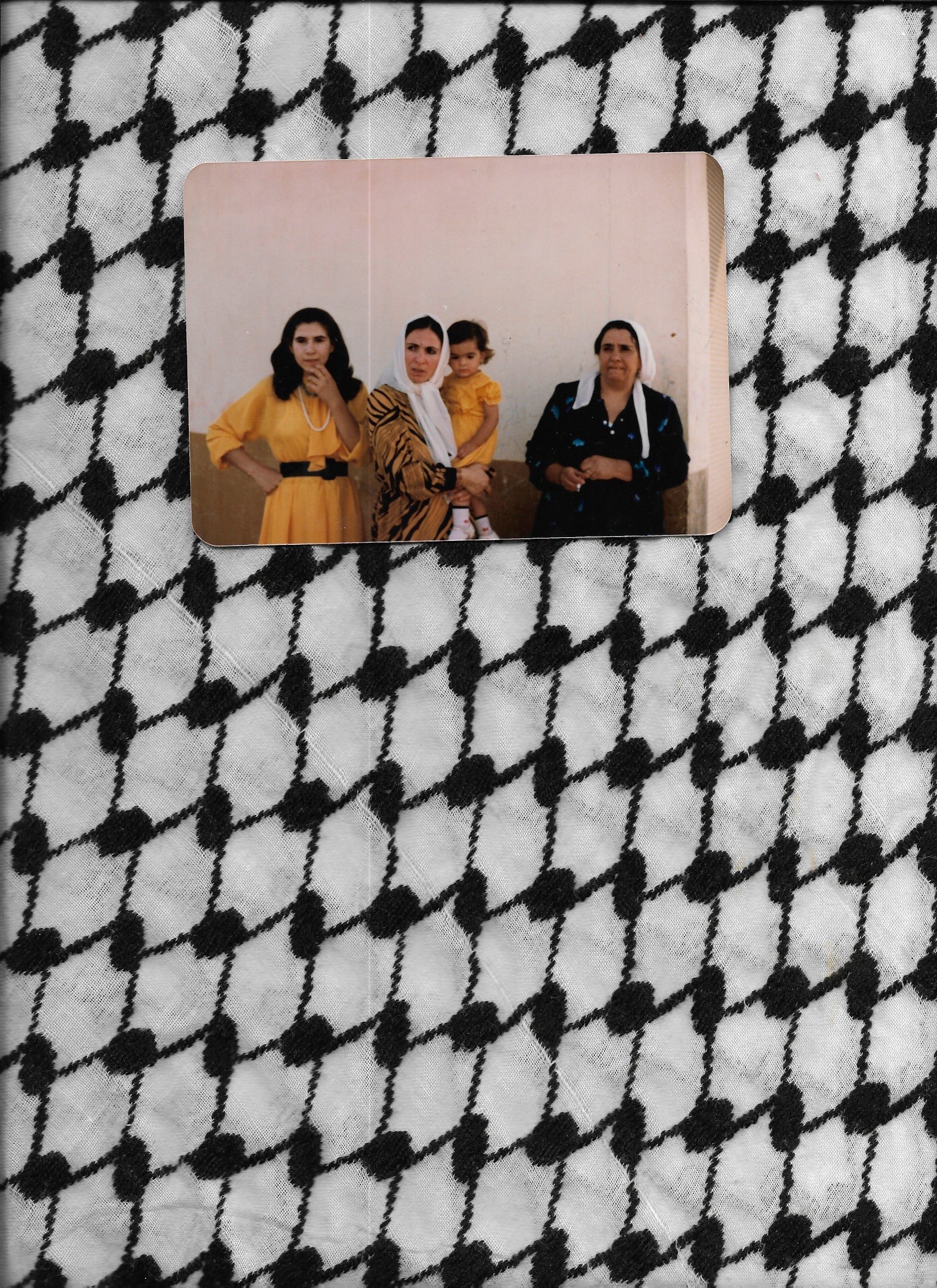 Many miles away from the Middle East lies a gallery called East of West. Situated in the heart of Santa Fe, New Mexico in the United States, the new art space is devoted to exhibiting work by contemporary artists from the Middle East, Africa, South Asia and their diasporas, presenting communities that can be described as “othered” to an American audience. In their latest exhibition A River Flowing, East of West investigates contemporary womanhood through the work of eight women artists, nearly all of whom, have links to the Arab region.

“As a woman born and raised in the Middle East, I had to accept cultural norms and traditions as they were, without question…I was always amazed by the impact that culture and religion had on members of my society, especially myself and other women”, says Maha Alasaker, a Kuwaiti artist based in New York. At A River Flowing she presents photographs in which a woman’s face is covered in flowers that have been taped across her mouth, as well as other images where her face is partially concealed by shadows and fabric. This covering of herself represents the act of veiling, in which she is interpreting her identity. Saudi-Arabian-British artist Nasreen Shaikh Jamal al Lail also focuses on the female face. Throughout her Abstract series a woman in a white veil is photographed with her eyes closed. Across the images her visage is taken over by Arabic script and black dots. The images are a reflection on the hajj: “The black dots covering my face represent impurity, a lack of clarity and distress”, says al Lail, “As the pilgrimage progresses, these dots are quarterly removed, leaving the face to emerge from behind the original opaque image.” 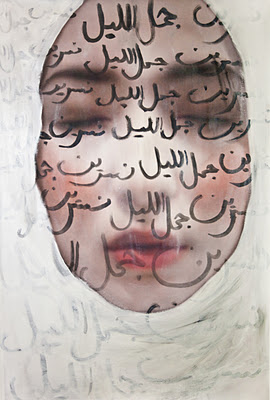 Photography runs through to the work of Evar Hussayni, a Kurdish artist living in London. In her series of mixed media collages Forgotten Women, the photographs of Kurdish women are pasted on top of a traditional garment called the kuffiyeh. The women in her photographs are from both past and present, spanning a time frame of 100 years. This documentation of history allows both Hussayni and her audience to unravel the history of the fashion, religion, labor, education and cultural values of the female Kurdish diaspora. Hussayni’s work also shows the relationships between women with many of her collages including groups of women, whether it be in the home, at weddings, or in some cases, multiple individual portraits clustered together to forge new relationships against the backdrop of the textile Hussayni has attached them to. This exploration of the relationship between women is also shown in Zahra Marwan’s work. Having grown up between two deserts very far apart from each other: Santa Fe and Kuwait City, Marwan’s roots are in too very different yet very similar geographical locations. Her watercolour paintings are populated by women tugging at each other. In Wrestling I and Wrestling II one woman carries another on top of her head. It could be that the two females are one half of Marwan’s existence, balancing the other half of her dual identity: American and Kuwaiti. 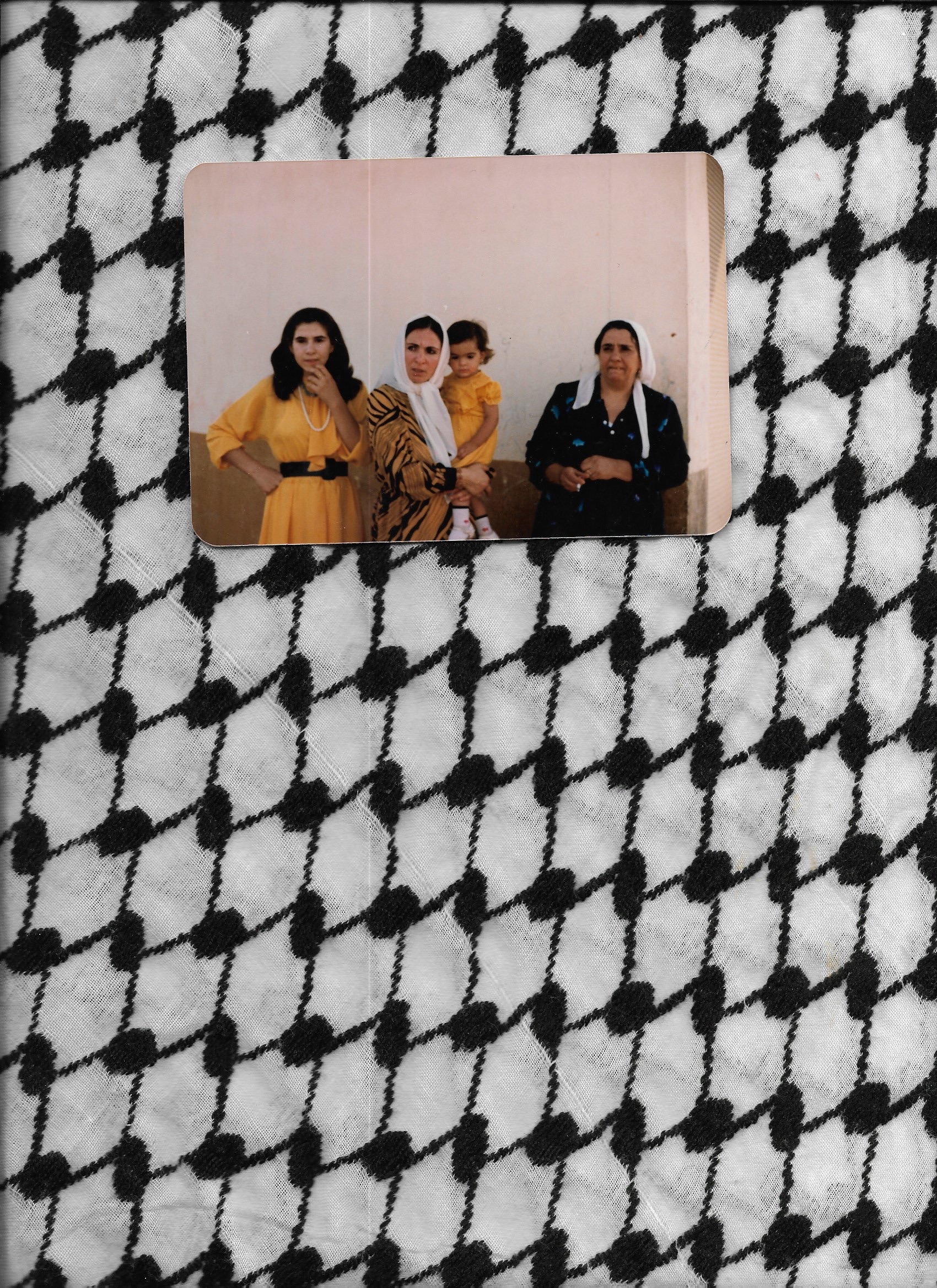 Similarly to Marwan, Shagheygh Cyrous’s work explores cross-cultural identity, having grown up in Tehran and relocated to the States due to political tension in her homeland. Her Lost Rug Project series picture traditional Persian carpets in locations that are foreign to them: parks and busy streets that are hundreds of miles away from Iran. In each of the images, the rugs seem lost and are completely ignored by any passers by in the background. Iran is also referenced in Window to Tehran, where the landscape of Cyrous’s hometown is pictured behind a window, which is blocking her from being able to touch her former home. The inside from where the photographs are taken is completely dark, while Tehran is pictured in complete light, evoking a sense of pain in being separated from her birthplace. 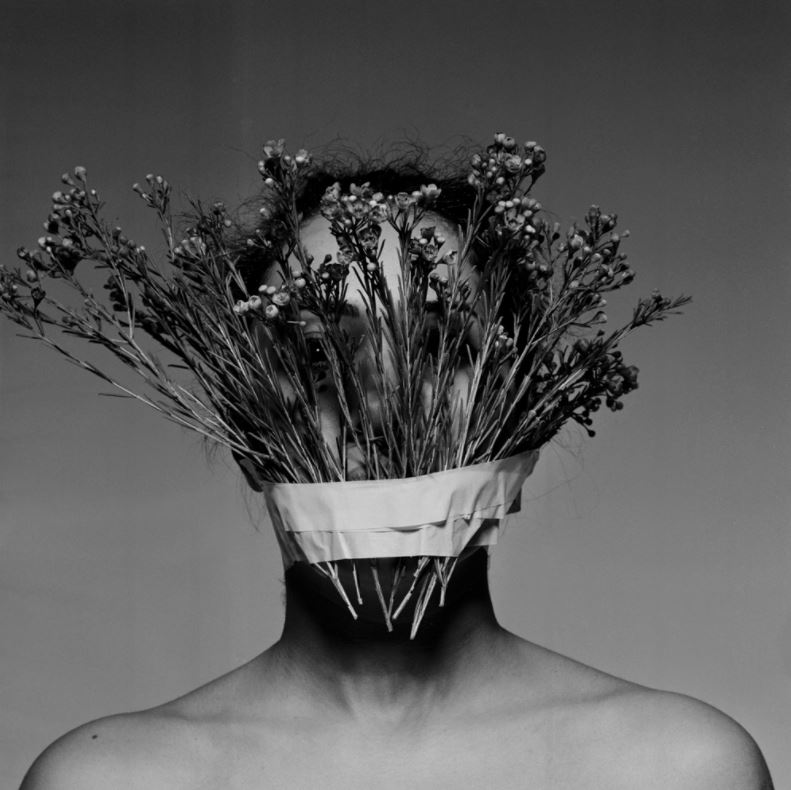 From representational to the geometric, Madiha Siraj and Meryem Meg work is comprised of shapes, colour and pattern as opposed to people. Meg’s Of Cosmik Series Cont. is full of abstract forms that explore the relationship between the cycles of the human body and Dhikr astronomy. “The symbolism is a mixture between Algerian and Bulgarian symbology”, she says, “They are playful variations of ghetto nostalgia informed by a diasporic experience.” A more traditional take on geometry is seen in Madiha Siraj’s work, constructed from polymer clay, seedbeds and glitter, putting a contemporary spin on historic techniques.

A River Flowing illustrates the female experience of the exploration of self, particularly that of a dual identity, within the work of eight artists. The paintings, photographs and collages on display offer a nuanced glimpse into ancestral memory and its impact on a new generation.