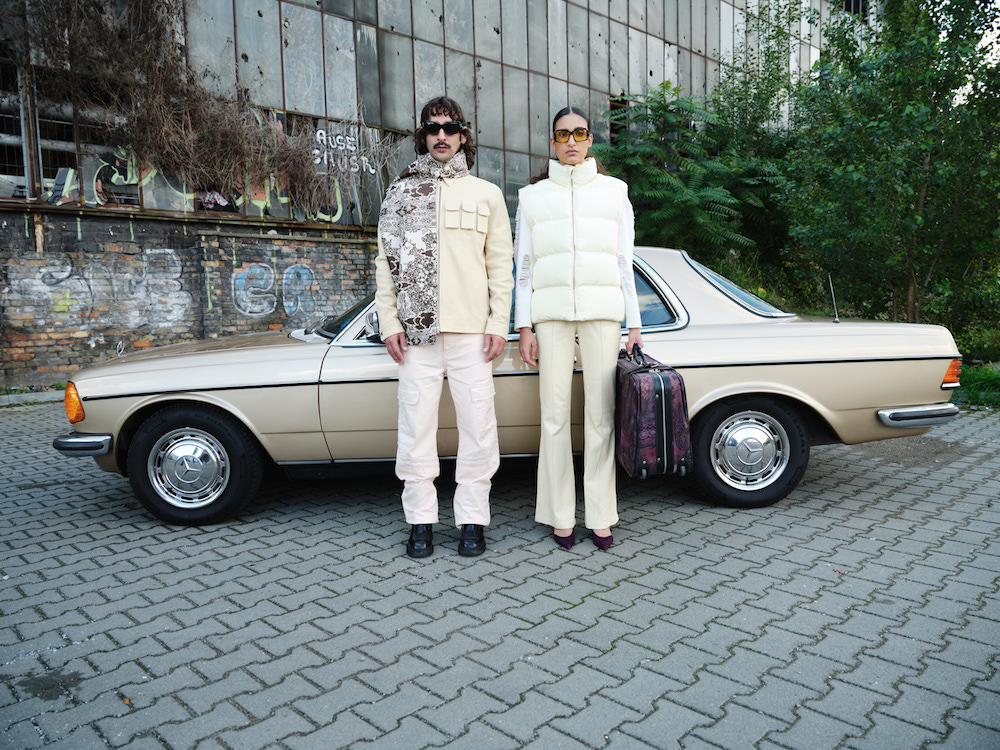 With raw and deeply personal overtones, Les Benjamins presents their FW22 collection: Herzlich Willkommen. An homage to Creative Director Bünyamin Aydın’s grandfather, who was a guest worker in Germany, the collection tells a story of displacement, family loss, and cross-cultural encounters of the Turkish guest worker program. Reflecting on the courage of his grandfather to leave his Anatolian village in Turkey’s Erzurum province, Aydın recalls the design process, detailing the journey, as an “explosion of emotions”.

Focused around the departure from Anatolia and the arrival to Germany, the collection draws inspiration from the intricate designs of Turkish tailoring and the workwear of heavy duty jobs, including factory workers, painters, and garbagemen. A luxury-meets-heritage take on utilitarian workwear, the pieces draw on Aydın’s personal experience of living between cultures, redefining what it means to fit in. Motifs of flowers, clouds, Mediterranean wallpaper, and the number 60 – representing the 60th anniversary of the guestworker program – are replete in the collection, paying respect to heritage, tradition, and a look into the unknown.

JDEED caught up with Bünyamin to discuss his personal story and how to design for the future while looking to the past.

Hi Benji! Thanks so much for speaking with us. Getting started, can you talk about the personal inspirations behind this collection, as this touches very close to home for you?

This collection really touched me. It was one of the most difficult collections to design because it meant unfolding stories that I never knew about my family and that were never talked about. We have this in the Eastern hemisphere’s culture, where we don’t talk about difficult moments of our lives. Especially our grandparents – they don’t want to pass down stories that they feel ashamed of.

For me, to discover what my grandparents went through, my grandfather leaving his family behind in Erzurum, his wife and his 3-year old daughter, and going to Germany. It’s both heroic and a bit crazy because you don’t speak the language. Imagine having no phone and not speaking the language, jumping on a train and not coming back – it’s crazy. I was very emotional during the entire process

How are you able to translate these deeply personal feelings of exile, displacement, into clothes, into the collection? What were your design goals?

The way I wanted to design the collection was to pay homage to grandparents and to all the guest workers. I wanted to create two stop stories, one the departure, when they left the country, most of them left from Anatolia to Germany, and one upon arriving in Germany.

From Anatolia they came to Istanbul, dressed in full 1960s-era tailoring, super nicely dressed. You would never guess they needed money from how they looked. Villages gathered money to
dress up the best way possible to be representative to their new boss, they wanted to look great. That is so sad – they don’t have enough money to feed their families but they find a way to dress well so they get the job. The first part of the collection is all about the 1960s tailoring, where I wanted to introduce the fusion between now and then.

The second part is more about the workwear upon arrival in Germany. I imaged designs drawn from heavy duty workwear jobs. I was inspired by garbagemen, tailors, painters, factory workers, so I tried to translate these heavy duty jobs into romantic workwear.


“This collection really touched me. It was one of the most difficult collections to design because it meant unfolding stories that I never knew about my family and that were never talked about.”

The collection features many motifs, including clouds, embroidered flowers, and various prints. What do these motifs mean to you personally, in your own story?

I spent a lot of time stalking DiasporaTurk’s Instagram accounts, community pages, and talking to Gokhan – he was a very important part of the collection. Talking to him, I found out a lot of details from the stories he told me. For example, there is this ritual where kids in Germany would have a necklace with the house key on it. They would have the key because their parents worked double shifts during the day, so they would have to go home themselves. I was inspired by the key and the kids that would wear them.

There’s also the wallpaper motif – Mediterranean wallpaper first coming from Italy. Turks found it very warm, and they used it in their homes, including my family’s homes. I put that design on knits, on coats, and made it into jacquard.

You also have the cloud motif, which symbolizes Anatolia and Anatolian arabesque music. When you listen to this music you stare outside, you stare at the clouds. I did a Les Benjamins carpet monogram combined with clouds that reminds me of listening to music, looking to the sky and imagining your family.

In your letter accompanying the collection, you say that this collection “questions what it means to fit in”. Can you talk a little bit more about this? For people who don’t have the experience of being in-between cultures, what does this mean?

This story is so deep and impacted me so much that a campaign, a photoshoot would not be enough. Why we started in Erzurum is actually because of my grandparents, they’re from there. When you see Erzurum connecting to Berlin and Neusse, seeing those two divides is an explosion of emotions, from where they left and where they came.

What I want to tell the second and third generation is that they should be thankful to their grandparents for making this life-altering decision. Most of the Western-grown youth take it for granted, they don’t know what happened. They’re too busy being on Netflix, Instagram, TikTok. They don’t know, they haven’t been educated. The Western school system doesn’t educate you on the sufferings they went through, it’s untold. That’s why I called it “A Personal Story Untold”.

There’s no platform talking about it. I think we’re the first brand to ever talk about the subject. It’s sensitive. When I was designing it I kept asking if it was too sensitive, but I said “you know what, this is my story. If it’s sensitive, let it be sensitive. Let people see this story.”

You mentioned a few months back about opening a community center in Germany to go along with the collection. How have you been able to blend the actual clothes with giving back to the community and creating change?

Shooting this film was the most important conversation opener.

We will be doing talks in the Istanbul store in collaboration with DiasporaTurk, where we will be talking about how this film came about, inviting the community to hear. We will also be releasing a capsule collection with DiasporaTurk and the proceeds are going to be donated to them, because their dream is to one day open a museum about the guest worker story. We are trying to support them in their social cause.

We are also going to tell more stories, creating our own editorials. Artists, musicians, personas that were part of this story, we want to create a mini documentary series about them, giving them a platform to talk. We have 6 months, we can do a lot.

We are also opening our Berlin store in the spring. When it’s open we are going to launch the community center within it.

Related Itemsbunyamin aydinfw22herzlich wilkommenjdeed magazineLes benjamins
← Previous Story Rania Fawaz tells us all about her label MORPHO
Next Story → JDEED’s Fall Picks | Our regional guide of what to check out in Art, Fashion & Design