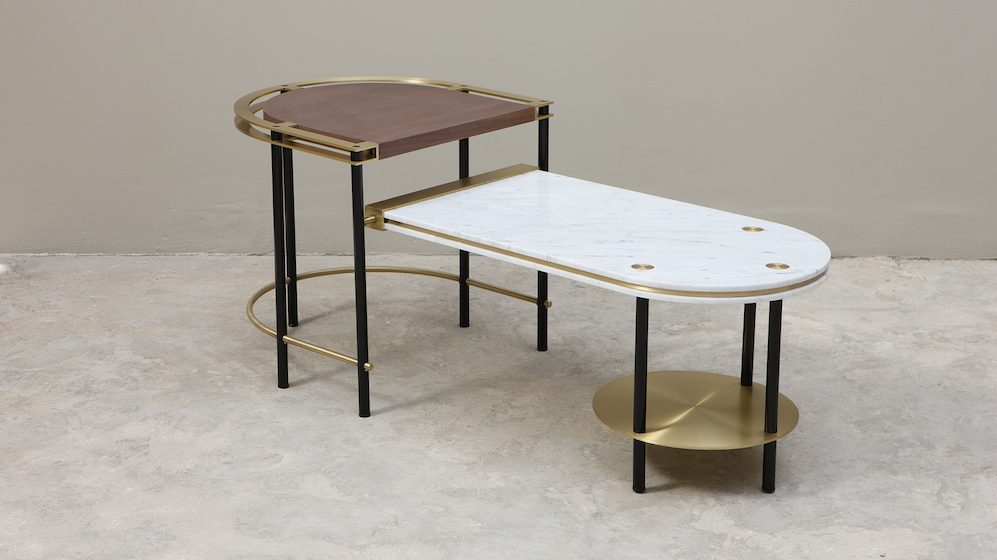 Ahmad Bazazo is the kind of person whose good vibes and energy attract you in the matter of an instant. Was it his magnificent pieces or his warm and welcoming smile that we first saw as we were walking around Beirut Design fair last month? We are unsure.

Meeting up with him a few days later, we realized it was a bit of both. An impressively sharp sense of associations and refinement, an ambition and straight-forwardness characteristic of  great achievers but a very down-to-earth and mature reflection, we can only bet that Ahmad will soon be the talk of the town. 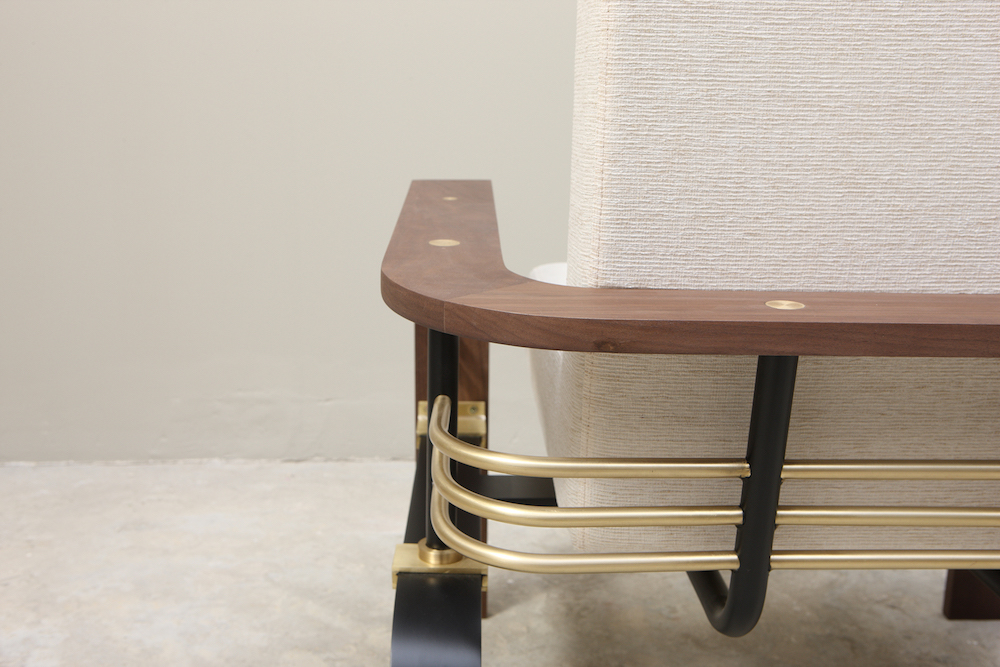 Ahmad, tell us: How did it all start for you?

I studied architecture, I graduated a year and a half ago. I took 8 months off and went to London with the intention of getting a job in that field. It was a done deal, my contract was sent by Perkins and Will (an architect firm), where I had previously done an internship. I was going for it and right before I traveled, the whole Brexit happened…The company still wanted me but needed more time. I still went to London and continued something I started a few months earlier, that is doing sketches.

I also have a friend in the English capital who is very into the art scene, even though he works for fiber optics. But yes, he’s really into design, goes to galleries, openings… we started doing cultural activities together other than clubbing and eating, so we’d go to the Tate, V &A, Saatchi… there was always something going on which really helped me sharpen my eye and kept me in a cultural loop and in the known. I really credit a lot of what’s happening in my career right now to being in London which is a city that really is a cultural hub that attracts so many types of arts, architecture, furnitures…

So when you were in London, was there something in particular that made you realize “this is it! I will do furnitures”?

I wouldn’t say something in particular…When I was in London, I was at a friend’s house and started sketching….Wait, this is it! Now I definitely remember- She was moving into a new house and was furnishing it slowly. She was buying things and I was helping her, moving things around.. The whole thing started with an ashtray, that never got made. She was telling me she always had a hard time finding nice ashtrays and nice coasters. So I started sketching this ashtray digitally and she really liked it. I didn’t know anyone in London to produce it and it was towards the end of my trip so unfortunately we didn’t do it but that was definitely an enlightening moment for me.

You should do it!

Now that I look back at it, I’m not so convinced by the design. Anyway, after that, I flew back to Beirut for Christmas, was busy with my friends until they eventually left back. Then Janaury came around and my parents slowly started telling me: “Ok, we love you but you graduated in May, it’s January now…” you know.

They’re very supportive but they didn’t really understand why if I had a job before I wouldn’t get one back. I started applying to places, getting a few responses…I was thinking about having my own thing but I was a bit hesitant. You know it’s a long term commitment to have your own business, something I’m not always comfortable with…

But now you work alone, you have your company.

Yes I’m my team.  But I like the idea of working in groups because it changes the way you think . You don’t always come up with the best ideas by yourself. And I hate asking my friends what they think because they give me too much compliments which doesn’t actually help. So I’d rather ask a stranger.

Well I’m a stranger and I love it. Is the Charles bar for your friend Charles (the one you were gallery-hopping in London with?)

It’s for another Charles, I have two Charles. He’s a very close friend. He’s Lebanese and works in Africa and the bar is based off of him. It’s within his style and the things he likes. He’s someone who likes to drink, go out, party… He changes a lot when he drinks which is the concept behind the bar. This is why there’s a hidden compartment that you don’t see. All of it doesn’t have any obvious handle. It’s a bit like him, a bit eccentric. When he drinks he really changes into this crazy person. The one that was on display at Beirut Design Fair is for him. 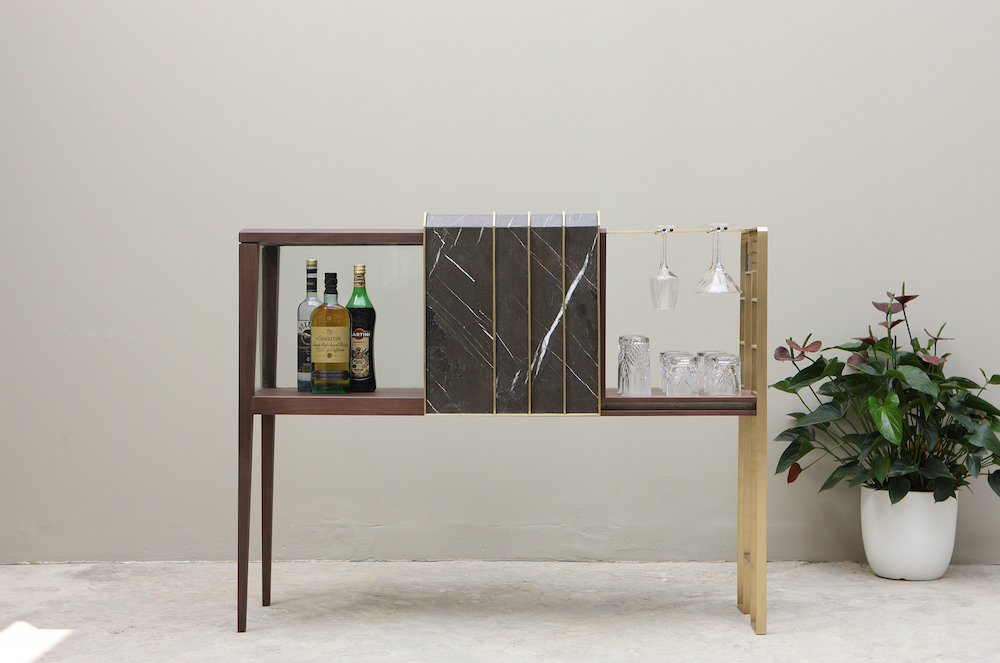 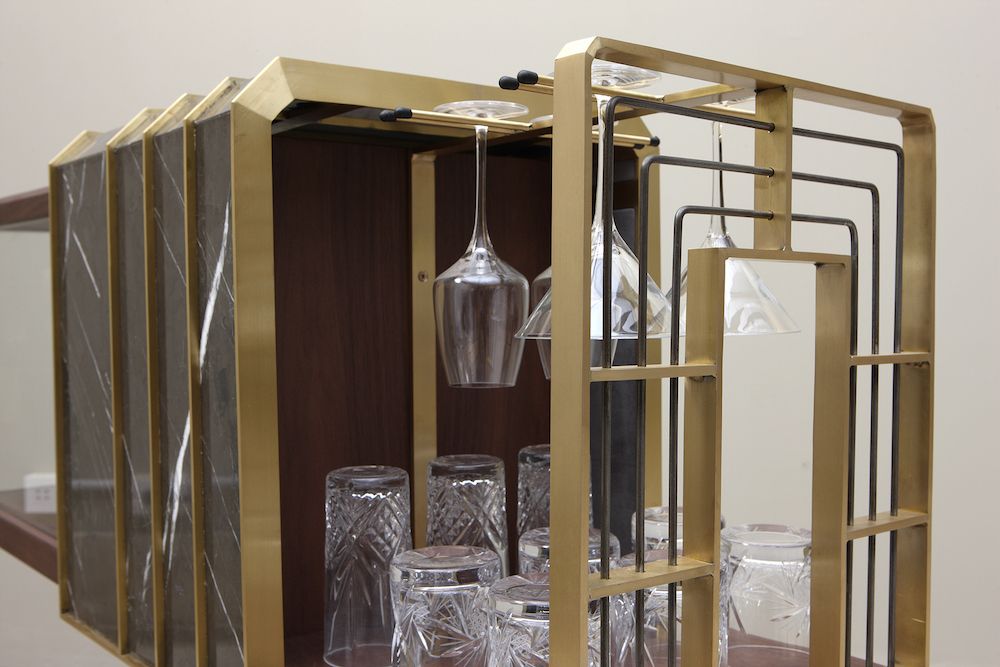 Do you have a permanent collection?

The philosophy of my studio is that everything is made to order, made to measure. I’d rather do much more custom-made pieces over having a permanent collection but I wanted a small permanent collection that has added pieces through exhibitions. Note also that what is existing can be changed and adapted to the customer’s needs and envies.

Since you’re alone for now, you can’t produce massively.

Exactly and the time that it takes to make a single piece can’t be neglected. You know the Bar for example, I’m there daily to watch every step of the process. The brushing for example, as they do it, I watch them work every second to make sure everything is done the way it should be. I wouldn’t want to sell a product that I wouldn’t want to have. I don’t design to sell, I design to more-less please. I make my pieces in a way that they please people and so that they can relate to them in a way or another. They’re done with certain stylistic norms yes, but there’s something more to them. There is something I always say: designers nowadays always try to be so crazy and different and they want to be inventors. I’m not that type of person. It’s more about creating something that is appealing and mysterious but to an extend. You familiarize yourself with it, you keep a part of mystery and I think that’s what’s attracting to me. Re-inventing something existing is harder than inventing something new. Taking something that already exists and revamping it in a certain way and actually making it relevant now is the challenge.

And here’s something I never understood: because I’m just starting people are telling me to use simple materials and that I can’t do a massive five thousand dollars piece as a first but on the contrary! I’m not someone simple. I like things that are complicated and have a story. 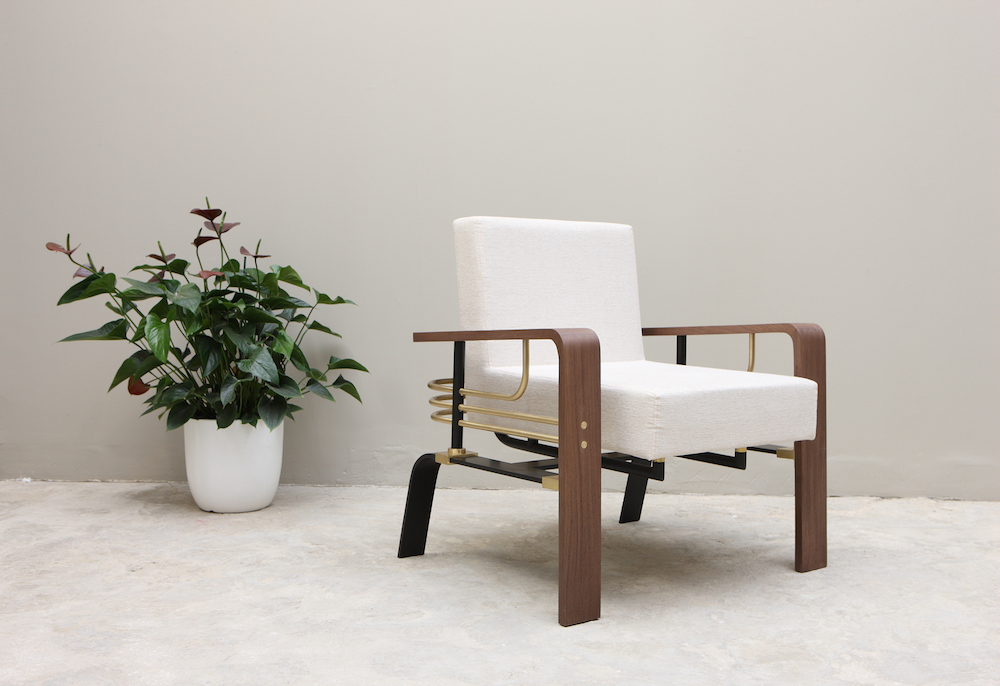 Yes and also that’s not how you would want your big breakthrough to happen, with a simple coffee table…

Exactly. You know, I want this first collection to reflect me and the way that I think and I’m not the type of person who’s like “Nordic”, doing very minimal pieces. I love them, I really appreciate them, but it’s not me. I’m a bit eccentric in my own nature and it reflects in my work.

You never thought of partnering up with someone? Seems like there’s this tendency in Lebanon.

I definitely see myself going into something more collaborative in the future but at least for the first collection, the first steps, I want it to be 100% me because in a way, yes it’s a debut collection, but it also sets myself within my client base so it’s like, let them see what I can do first. As I said before, I don’t believe anyone has the perfect ideas on their own so, eventually, I’ll consider a more collaborative frame of work. 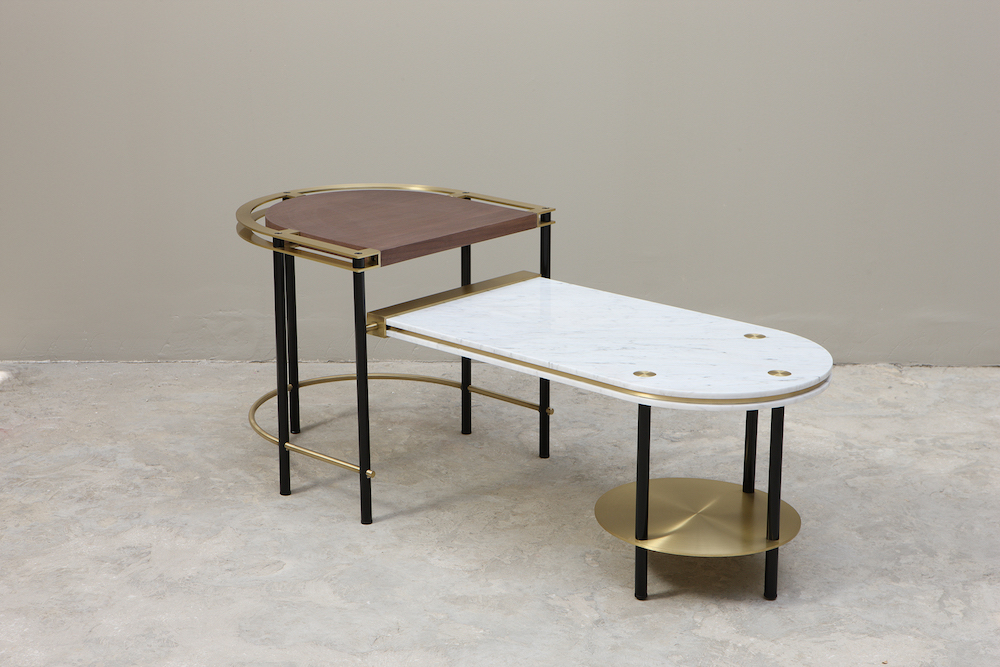 As a company, what will be your next steps? Do you want to stay small or do you rather picture yourself having an office in Dubai, one in Beirut..?

Definitely in the long-term, yes, but I don’t want it to be that for now. This is kind of the things I want to do, but I’d wish to stay small for now. I’d rather do 5-6 pieces a year, perfect pieces, over producing 20 in a rush.

The love of detail, the patience and perseverance of the perfectionists with an eccentric touch: Ahmad is just starting but is slowly establishing himself like he’s known forever. But as we both concluded: Everything happens for a reason. And well, even Brexit. 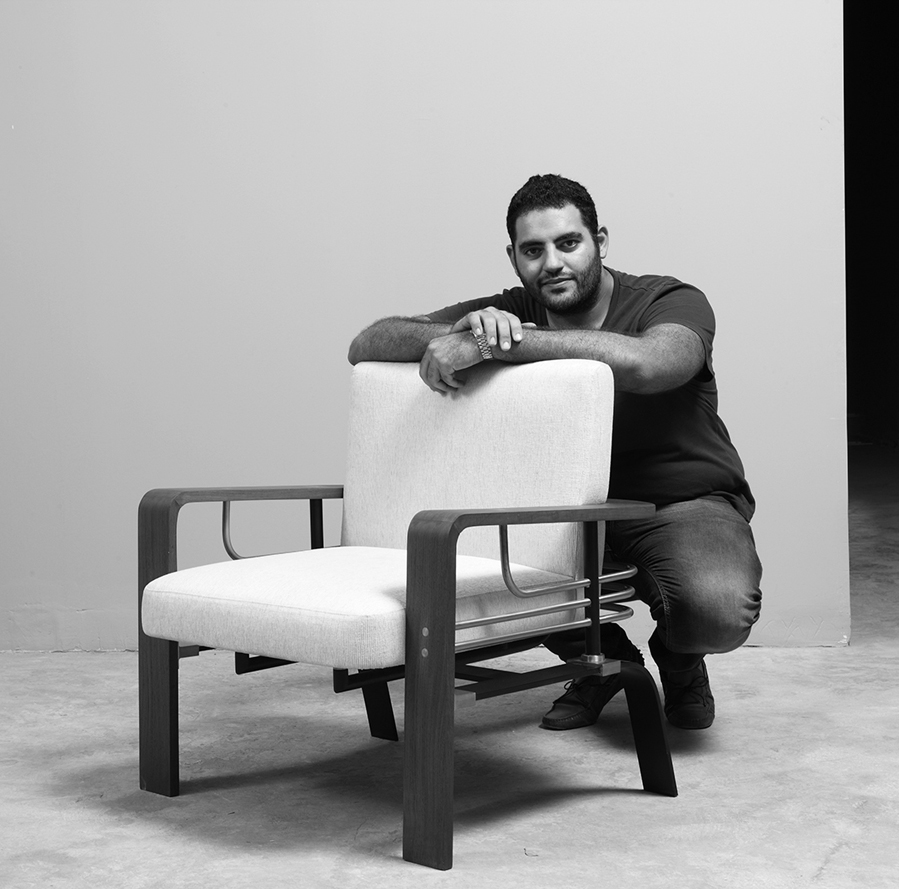 Ahmad Bazazo posing with his piece in Beirut.

Get to know more about Studio A here