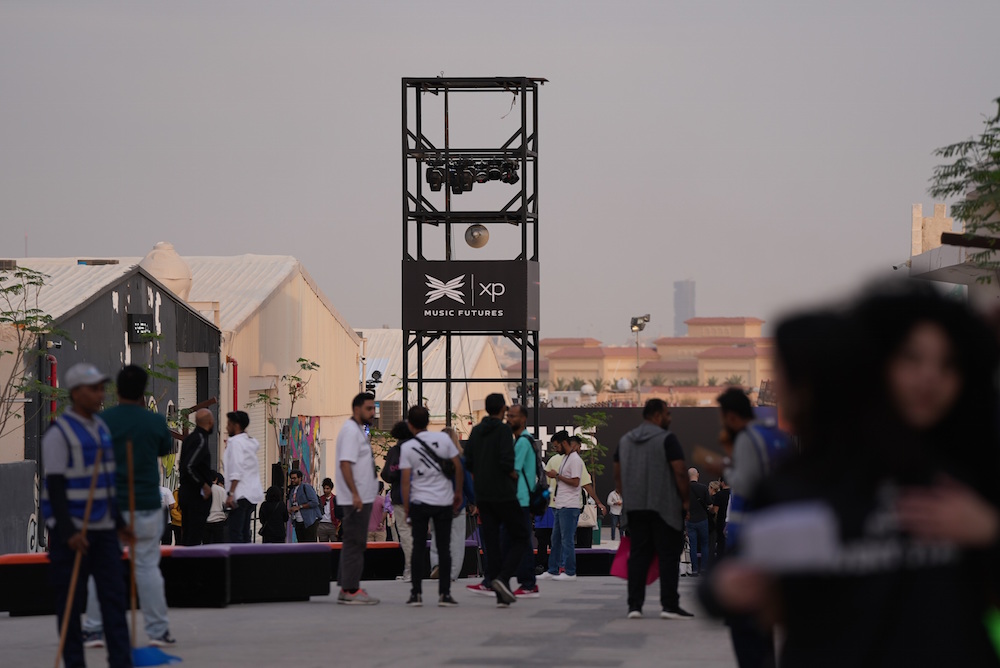 The MENA region was recently found to be home of the most rapidly growing music industry in the world. With the incredible potential witnessed at XP Music Futures here in Riyadh, Saudi, it’s safe to say music from our region will soon reach everyone’s ears.

Panels, worskhops, performances, shops… XP Music Futures leaves nothing aside to immerse the visitor into a one-of-a-kind experience where the music industry exists under all its forms.
On our radar for day 2 of the event, Narcy Nacre took the stage alongside Saudi DJ Nooriyah, singer Nourah Almmary and rapper Saint Levant to discuss the Arab Wave 2.0 and how young artists Arab artists are taking the lead.

Amongst the addressed topics, we were particularly into how to navigate life online versus offline, keeping cool while going viral and how to stay grounded. Marwan aka Saint Levant suggested to “try therapy, [I] recommend 10/10”. The artist also shared: “And speaking to my mum.”
A well applauded advice by a cheerful crowd that can only agree: speaking up about mental health is the way forward.


“Be like you – we already have Beyoncé. Create your own style and artistry”.

If there’s anything that really came out of yesterday’s talks and general ambiance is a great deal of vulnerability, empathy and true sense of community. Producers, artists, managers: the rooms filled up with actors of this industry that came together to network, discover, get motivated and sing along. Talking about getting motivated, Beyoncé’s father, Mathew Knowles held a 90 minute discussion and exchanged with the public on ‘The Fundamentals of the Music Industry in a Digital Age’. While he shared what sometimes sounded like harsh truths, he mostly got us get a much needed reality check: “Be like you – we already have Beyoncé. Create your own style and artistry”.

“Unique” sings his World-famous daughter and unique is, in his words, perhaps the only thing you need to focus on. Accompanied by the lovely Enji Kiwan, Knowles concluded with a statement that if, no matter how many times we hear it, never ceases to motivate – and even 10 times more coming from him: “Never give up on your dreams.”

The alleys of XP Music Futures at JAX District

Hopes and dreams were sweating through the alleys of XP as the crowd awaited patiently for a performance by Abu Recordings; Saint Levant, Bayou and Felukah stormed the stage in front of a crowd of fans.


Today is the last dance for XP before leaving the floor to SOUNDSTORM and will include a talk on Women Leaders, a meeting with the Youtube Music MENA teams, a discussion on the power of social media with HYPEBEAST and buckle up, a reflective talk with international DJ star David Guetta.


To wrap up day 2, we leave it to Nada Alhelabi, Strategy Director at MDLBEAST, to conclude: “From panel discussions, to workshops, to networking and live performances, the second day of XP Music Futures hugely affirmed our belief in the Saudi Arabian music scene. The feedback we have received at XP Music Futures reassures our optimism that the second edition of the event has tapped into what is required in the Kingdom’s music scene to fully flourish.”

Tickets are still available to purchase.