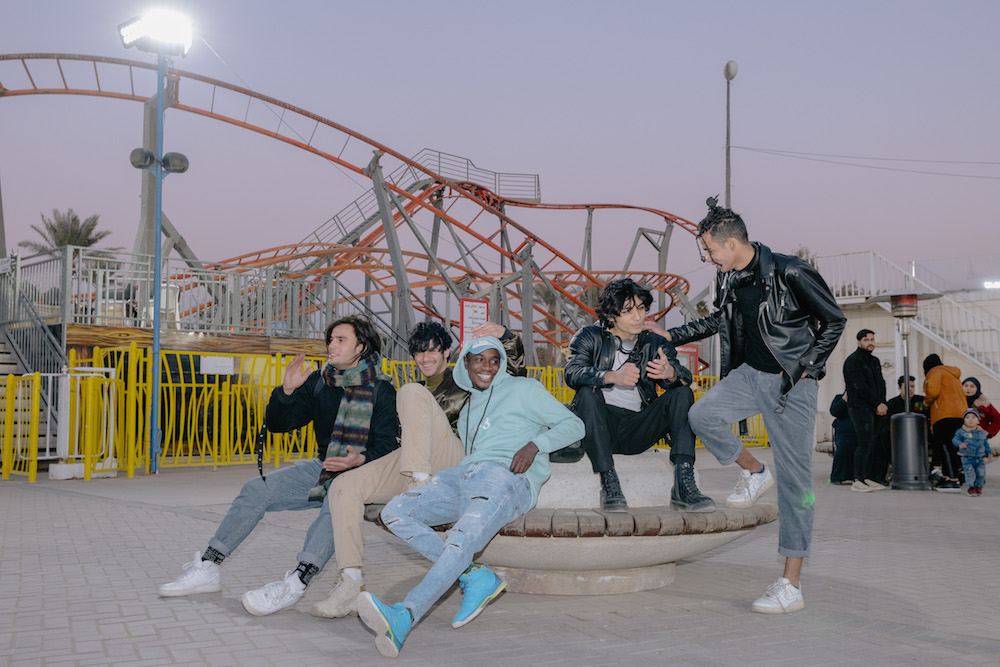 A closer look at “Baghdland”, a photo-documentary by Aline Deschamps

Aline Deschamps is a French-Thai photographer who graduated from a Masters in International Relations and holds a post-diploma in Digital Media Arts. Her work’s subjects are often linked to identities issues such as gender, migration, cultural mix and stand as a visual translation of social testimonies. Based in Beirut, Aline gained visibility through her series “I’m Not Your Animal”, depicting the realities of life of the migrant workers in the Lebanese capital. Today, we catch up with Aline to discuss her project “Baghdadland”, a series shot in the theme park of that name,  in Iraq, and to understand better the motive behind the series.

Hi Aline! How do you make use of your creativity to depict realities that go against the cliches?

I think it takes time to grasp a subject, and to avoid projecting our own preconceived narratives. When I first approach a documentary work, there is no intention to deconstruct stigmas; I rather try to take time to immerse myself in an environment. That’s when my eyes become driven to what I don’t usually see in the press or in the dominant narratives ñ away from the shocking or sensationalist images. What interests me are the intricacies of the everyday life, our layers of complexities and our contradictions, what makes us human after all – and this is what I try to share through my visuals.

When I followed migrant workers in Beirut, I witnessed their everyday challenges and survival but it was also crucial for me to capture images of how I saw them: from a place of power, grace and beauty. I believe this perspective helps highlight the complexity of their experiences – something global news is hopelessly inadequate at doing.

It is the same with Iraq. The endless images of violence, pain, and destruction shown of the country since the US invasion have deeply shaped our perception even 20 years after the war. So when I went to Baghdad; I tried to get rid of all these preconceptions, and just dove into the city. And what did I see? LIFE.

What exactly did you see there ?

When you go to Kerrada (a district in central Baghdad) people are working in cafes, drinking tea until 2am, there’s street food, shishas on street corners. You go to parks, women are flying kites, youngsters are riding horses, families are picnicking with loud music. I was astonished and wondered: why isn’t this reality depicted anywhere?

I feel that for some MENA countries, there is a digital oppression of images of joy in Western media. Try to Google Iraq or Lebanon, and you will mainly see images of destruction. Do the same with France, and suddenly you only find clean streets of Paris and rides on the bateau -mouche (any respectable Parisian knows this is far from reality). This dichotomy, aside from being false, is dangerous.
It creates an “othering” of people, meaning you’re labelling or rejecting, consciously or unconsciously, a certain identified group that you assume is inherently different from you. You don’t apply the same standards, you don’t share the same empathy.

I think that’s also what drives me to document everyday life, especially in Iraq, because it shows the universality of our human behaviors. By creating images of a city that people don’t expect, you are challenging the collective imagination. And in a way, you are taking a political stand.

Why did you decide to focus your project on “theme parks” in Iraq ?

As mentioned, I tried to embrace what I saw in front of me. Surprisingly in Baghdad there was a great number of theme parks around the city, many more than in any European, Asian or American capitals I have ever visited.
I went there out of curiosity to relax and have fun. Little did I know I would be so amazed!

Groups of kids were rollerblading, women in full abayas driving bicycles, others driving bumping cars at full speed. Many young men had this crazy Iraqi hairstyle brushed up like in Dragon Ball Z (sorry for the 90s kid reference), others were dressed very elegantly. I also saw black Iraqis and non-black Iraqis, and the mix of many social layers in the park.

Beyond the dreamy and amusing subject of theme parks, this place brought together many social phenomena to analyse.

“The endless images of violence, pain, and destruction shown of the country since the US invasion have deeply shaped our perception even 20 years after the war. So when I went to Baghdad;
I tried to get rid of all these preconceptions, and just dove into the city. And what did I see? LIFE.”

What’s the story behind “Baghdadland”? Why did you call your project as such?

One night, I drove past a sign with the word “Baghdadland” written in huge letters. I was in shock : had I really just seen this written in huge fluorescent yellow letters, in the same typography as the notorious “Disneyland”?
I had to pinch myself and ask some Iraqi friends and well, no, I wasn’t dreaming. This theme park existed, and even though it was much smaller than other ones throughout the city, its name instantly awakened both a feeling of bewilderment and a sense of contradiction within me.

For some background info, you have to remember that Baghdad is in its 20th year post US invasion, that there are posters of Soleimani kicking the American troops displayed on the streets, and there can be a strong sense of anti-imperialism felt in some parts of the city.
So seeing “Baghdadland” written in front of me was a compelling oxymoron: on one hand there is the word Baghdad, a city connoted with the idea of danger and war in the West and on the other hand that land directly inspired by “Disneyland”, the paramount of American pop culture and the very core of a fantasised dream world.


I liked this name because it is a converging point of contradictions which also illustrates the fantasy that unites us in our inner children; a place of joy and freedom where anything is possible.

What do these theme parks signify to Baghdadis?

I think they are little bubbles within the city, a bit like anywhere else in the world. But in Iraq, theme parks have a special history. In fact, the first theme park of the whole Middle East was constructed under the Ba’athist party in Baghdad in 1963, by the name of  ´ Medina al il3aab ª meaning, the City of Games.

Today, the sites remain a place of entertainment and socialising. In Baghdad you can’t really ride a bike because of the traffic. It is a dense and polluted city, with a lot of traffic jams. These parks are above all a space of freedom of movement. You can see women learning how to bike there, kids and adults skating and rollerblading. People are free to laugh, ride, scream, and to express themselves with their whole body.
But theme parks are also a place of freedom from certain social norms. For example, because of the weight of traditions, youngsters can have a hard time to meet and flirt before they are engaged. Theme parks are spaces where they can discreetly meet ñ away from suspicious eyes.
They are also among the few public places where there is a mix between men and women. For example, in most Iraqis restaurants there is a separation between the men and the families/women parts. Same goes for buildings. There are appartements you can rent as a single man, and others intended for families and women.  This segregation between the sexes is blurred and almost forgotten in theme parks.

Finally, it is also a place of social mix. You can witness people from different cultural and economic backgrounds. Some buses arrive directly from rural areas or from Basra, a major city in Southern Iraq, to transport families to have fun in these parks. On the weekend, they are completely crowded; it’s impressive to see them so packed and full of life.

How do people there were apprehending your outlook as a photographer?

It’s important to say that as a foreigner photographer in Iraq, I was extremely welcomed. Despite years of war, all the people I met were very curious and most of the time helpful if I wanted to take a photo.
In a city filled with militias like Baghdad, you still have to be very careful. I would always wait to make sense of the environment before taking my camera out.  You always attract looks. But so far, I have never faced any problems. Maybe people were less suspicious of me as an Eurasian woman.

In theme parks, people were very comfortable with photos. Some of them even asked for it. Maybe they were happy, even proud, to be captured in such environments with their friends and kids. Also, Iraqis love social media! They are not at all camera-shy, quite the opposite.

A few Iraqis from the diaspora wrote to me to say they had discovered positive images of Iraq through my Instagram. This touched me a lot. I hope this documentation can inspire others to return and discover the beauty of their country through their own eyes.


Discover more about Aline’s work on her Instagram, right here.