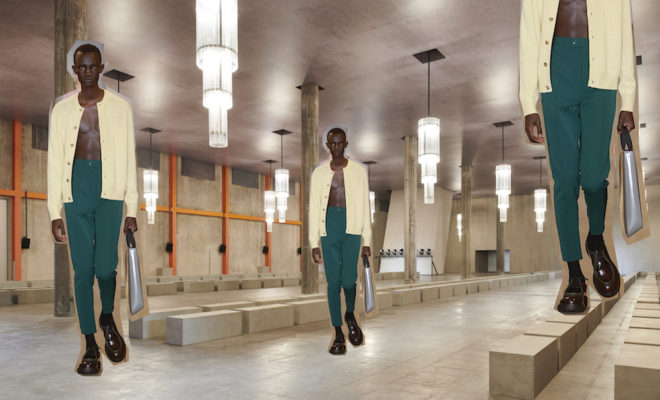 Milan Fashion Week Men stormed the city with avant-garde creativity, tailoring perfection like only Italians know how to deliver, +21 couture and wearable duvets.
From ETRO to Dsquared2 via Prada, here’s a roundup of the best trends we spotted during this once again exciting settimana della moda.


Our first stop is ETRO’s fabric heaven with the delivery of Marco De Vicenzo’s debut men collection for the house who initiated his research with a jacquard velvet blanket from his childhood. Wool, knits and other leathers adorn themselves with patterns and flowers, emphasizing on the sine qua non condition of showcasing patterns and textures.

We are now taking off and smoothly landing at Fondazione Prada, more specifically at the Deposito where the house hosted its guests in a barely-lit, raw space somewhat shaken up by orange pillars that descended from the ceiling as the show started.

It’s another look back at fashion rudimentary forms this season for Miuccia Prada and Raf Simons who once again bet on a mastered simplicity. Impeccable tailoring is star, chests are sometimes naked, silhouettes are smart with straight legs, balanced with wide bombers that resonate the extra-large ones proposed for Fall 22. An apparition of red here, a blue or green there come light up neutral tones palette, while a silver tote catches our attention.

The exploration of teenage characters was the starting point of this collection that proposed most of the Dsquared2 signatures – denim, metal branded buckle belt, parkas and camisoles.


As per JW Anderson, his second Milanese exercise was nothing but a display of the designer’s bold creativity from a barely-there opening look, frog clogs birthed in collaboration with Wellipets, pillow-integrated tshirts, ruffled leather reminiscing of JW’s memorable 2013 collection. A touch of humour, engraved in the brand’s DNA, here exists through tomatoes painted on the models’ bodies,  pillow hugging, mega sim chips or rabbit-patterned wool micro-briefs. Fizzy sweaters are worn sans pants, completed by pairs of flat leather boots, in blue, yellow or brown.

Coats close very low or fully with buckles while footwear is indecisive; it’s time to mix-and-match.
Also showcasing women Pre-fall, we gladly noted the return of the Bumper Bag in a dreamy turquoise or deep bordeaux.