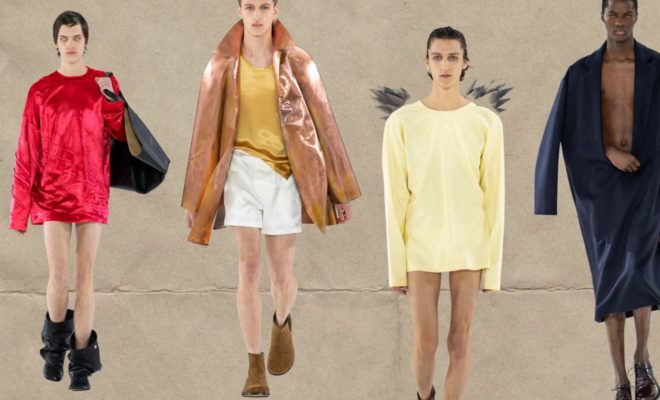 Aligned with the vision set for his own label for FW 23 at the latest Milan Fashion Week, JW Anderson proposed here for Loewe, a silhouette that withdraws the futile to let the necessary take full control.

It’s in a location a ride away from central Paris that guests were welcomed this season, in a sleek white room dressed in two digital original artworks by Julien Nguyen. The art was depicting Loewe’s muse Nikos, portrayed in the intimacy of a home, with his body presenting “signs and symbols that muse on the power of love.”

Amongst other media, Nguyen chose copper and vellum as a base for paintings which we soon understand will translate into pieces of clothing. This season, Anderson bets on efficient cuts and proposes über-structured shoulders, arms, and waistlines. The tailoring of the pieces seemed as a freeze-frame from a video where a protagonist would be running; like an armour with infinitely precise proportions.

We spot velvet, satin, some of the coats are floor-lengths and as unveiled at JW’s show earlier this month, the coat’s necklines sit low and the legs are mostly bare . Some Loewe angels walk the stage as the heavens send the acclaimed Puzzle Bag out on the runway, here in a tote version to maximize our desire.

The color palette is clean; it’s beige, it’s greige, it’s brown or white enhanced by dashes of deep green, red and glitters. Our eye catches the insane bubble-shaped shearling coats, worn with simple briefers, continuing to emphasize on this notion of complex-casual, bringing forward an idea of future-lounge wear that we’re definitely here for.


The materials are given full spotlight, resulting in a delivery that complicates as the viewer gets closer. As per footwear, flat boots are unsurprisingly finishing the looks.

The portrait miniature, created for the invitation, makes reference to a drawing of the personi cation of fortune by Prud’hon and is rendered in a style reminiscent of the Elizabethan portrait miniatures by Nicholas Hilliard. The intricately detailed image is littered with hidden meanings; the latin phrase ‘Ubi Amor, Ibi Oculus’ taken from Thomas Aquinas translates as ‘where there is love there is sight’.

The two large scale digital images created for the presentation depict Nikos in scenes taken moments apart, across time. Captured in a situation of domestic intimacy, his body is inscribed with signs and symbols that muse on the power of love.”
Press release comments.