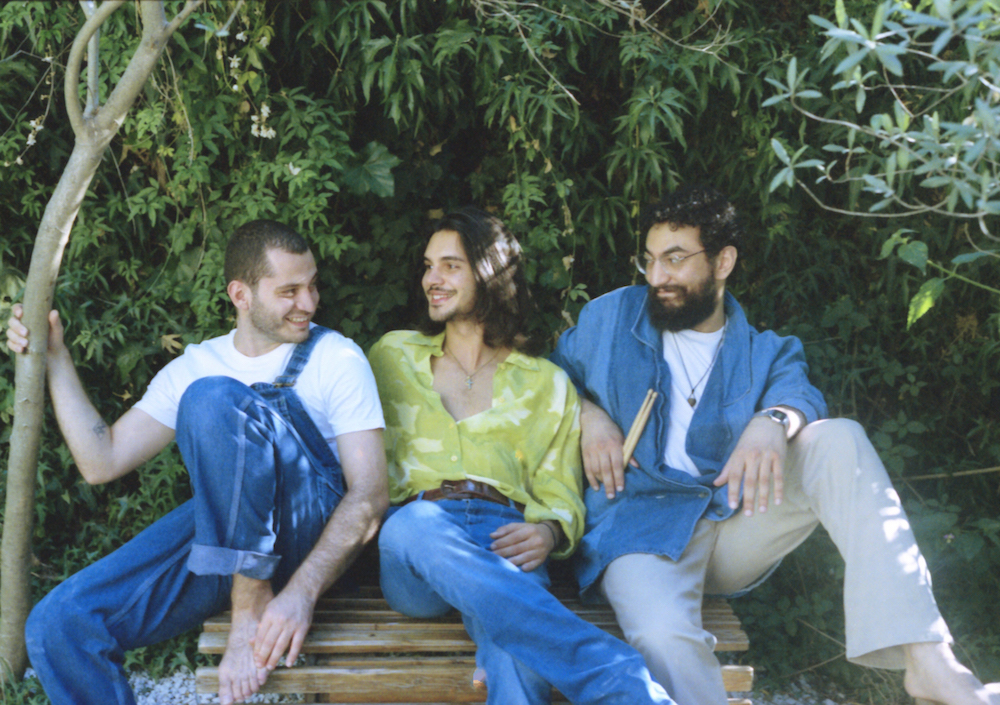 
Founded by Amin (vocalist), Andy (guitarist/vocalist) and Hanna (drummer) back in 2017 in Beirut, Taxi 404 is an indie Lebanese pop and rap French-speaking band that is rapidly gaining momentum.
Their first EP “Vortex 404” that came out in May of last year seduced the public and owned them to be featured by Scene Noise as one of the 100 best albums in the Middle East in 2020.
Wavy sounds with a touch of nostalgia, Taxi 404 mixes all the desirable elements to make us want to play their songs on repeat all Summer long. The good news? “Deux”, their second EP release is around the corner, featuring light but well calibrated sounds like “Soleil” , our favorite, with its upbeat but sensual notes.
JDEED spoke to Amin and Andy to get to know more about the band and their upcoming projects.

Hello Taxi 404! Can you introduce yourselves to those who might not now you?

Taxi 404: We are a band founded in 2017 whose sole purpose is to make music because that is all we know how to do. The band is composed of Amin, who produces the bass sounds with his voice, Andy, who creates the high-pitched sounds with his singing and who’s been playing with the same guitar since 2003 (three strings left since 2016), and Hanna which hits various polygons to put rhythm in this untuned orchestra.

How would you describe your sounds and what are some of your influences?

We don’t really have musical influences, but rather inspirations. Our goal is to create our own signature and make music that deeply resembles us. We listen a lot to The Strokes, Serge Gainsbourg, Chet Baker, Chopin, Kendrick Lamar, Philippe Katerine, Parcels, Britney Spears… As for our sounds, they simply adapt to our mood when we create. We don’t want to be fixed in a specific style, but we’d rather follow our creative impulse wherever it leads us. We never sit back and say ‘today we make a R’n’B love sound’; it really depends on our mind set.

Your new EP “Deux” is about to drop. The songs are very fresh and solar; How was the process like from writing the lyrics to the beats and what did you want to express this time around?

For our project “Deux”, we had already composed many songs, and chose the productions that were the most similar to what we had already prepared. We have a mailbox in which we receive different music productions.
We listen to about thirty of them a day on average, and work with those that inspire us instantaneously. We wanted to propose a solar EP to counterbalance the darkness that reigns nowadays, especially in Lebanon. It’s cliché to say, but we really wanted to be a spark of joy and sunshine to all these people, even if it lasts the moment of one song. We were very careful about the vibrations we wanted to project, and each word was chosen to resonate in a luminous way.


“It’s cliché to say, but we really wanted to be a spark of joy and sunshine to all these people, even if it lasts the moment of one song”

Rumor has it that you will be performing in Beirut soon: what’s the best thing about being on stage and how did you cope with not being able to do so when we were all confined at home?

Bad. So bad. Above all, we make music to play on stage and share it with the public. It is the finality of our work. Streams are good but they do not satisfy our thirst for expression. We still haven’t been able to play our first EP on stage and going live in July will be an opportunity for us to celebrate the old as well as the new EP. No word can describe how much we are excited. Or maybe the word excited.


You were founded in Beirut; has the city had an impact on your approach to music or the way you create it? What do you think of the music scenes in Lebanon and the Middle East right now?

Beirut has had an impact on our music for sure. We can’t find a more benevolent audience than the one in our city, especially for a band that is only just begging and still finding itself. We think that there are interesting things happening in the Lebanese music scene and the MENA region, but we do not think we are in alignment with many in terms of our vision. We do not want to fall into musical elitism. For us, music is made to gather different perceptions, without judgments and without apriorism. That remains our humble opinion.

If you could collaborate with anyone, who would it be and where (which iconic concert hall or festival) would you perform together?

Without hesitation, Julian Casablancas. He moves us enormously. As far as the concert venue, nothing specific comes to mind, just a room with a good sound system and good energies.

You have a growing success but what would be a significant achievement that would made you say “mama we made it”?

Paying rent from the money we make with our music.