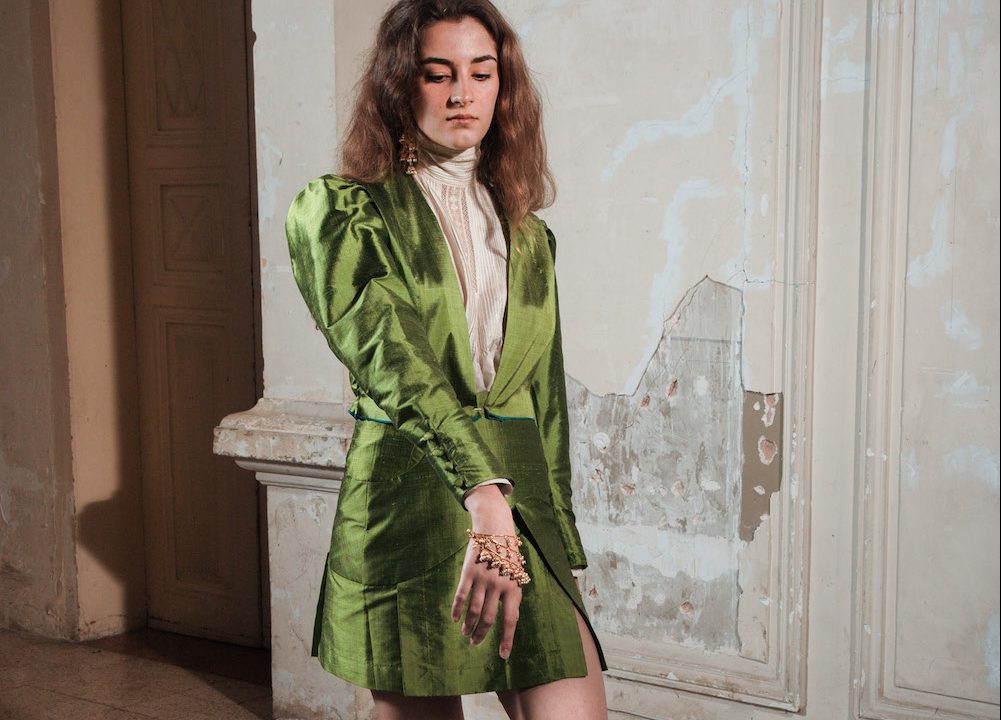 I met up with Larissa von Planta, an innovative, inspiring and fresh new designer at Mansion, the perfect setting for an interview. The place itself is an antique yet a truly unique space to so many new and artistically driven individuals who are using it to fuel their inspiration and work on their creative endeavors as well as boost their careers. So it was only natural that Larissa would choose it as her studio and feel at home working at Mansion while being surrounded by many other artists. I got to chat with Larissa about the concept behind her debut collection, why she chose to open her atelier in Beirut and her upcoming projects.

“I think creatively Beirut is buzzing and there’s a lot happening.” 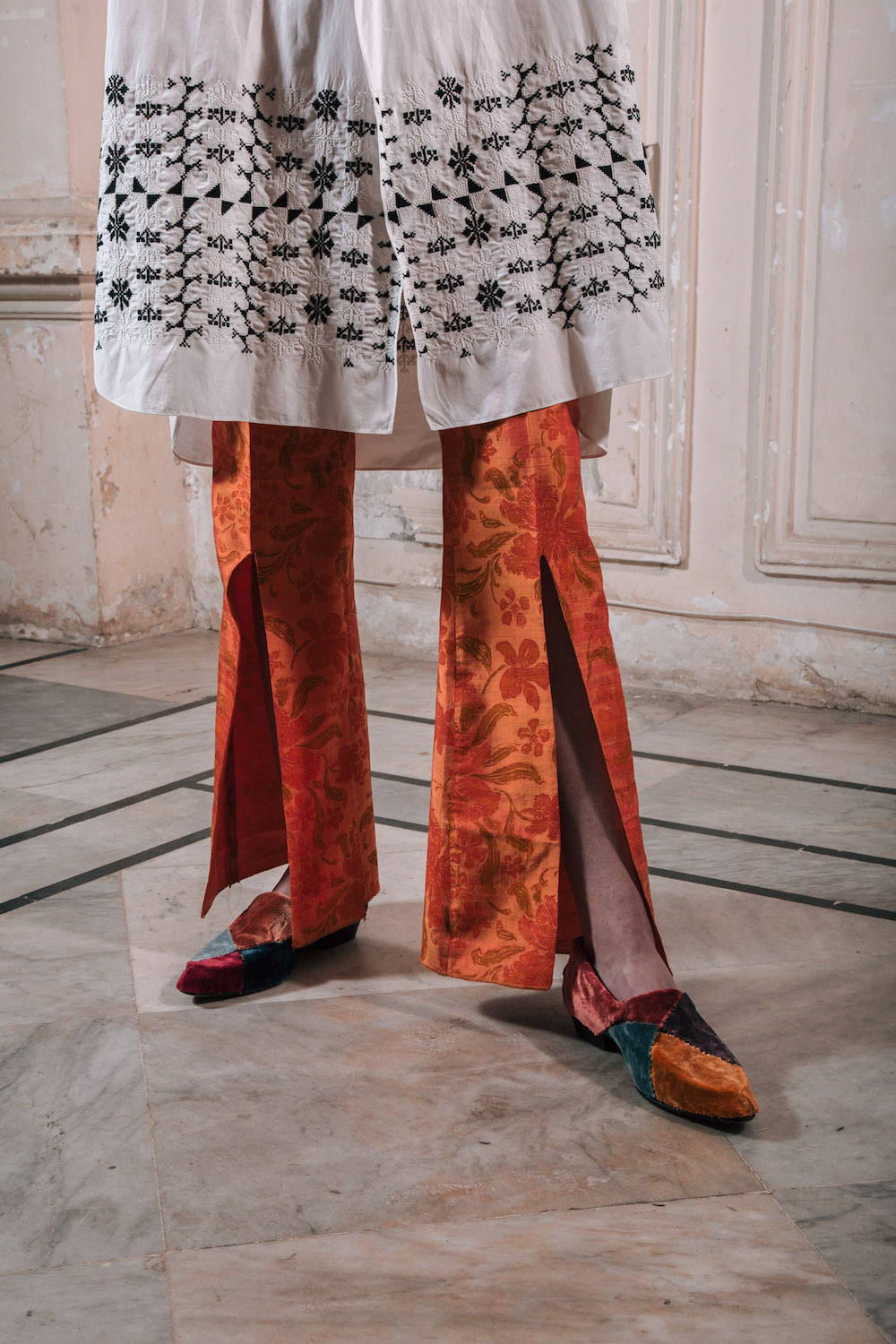 Can you tell us about your background in design? What motivated you to pursue a career as a designer?

I studied at Central Saint Martins, I did womenswear and it’s one of the most creative fashion courses out there because it’s really about how to develop your own style and be very personal about your design rather than being market focused. Since the beginning I’ve been very much motivated to do sustainable designs and it was really a space where I could experiment and try out new ideas and new possibilities of working in this way.

I think what really made me want to be a designer is my internship at Saville Row in London, at a menswear tailor where I used to go every holiday just to help out. They would teach me a lot -and it’s a six year apprenticeship so I really got an insight of this incredible world of made-to-perfection. Also, the interaction between the tailor and the client is something that gives you a very special attachment to the clothes and they’re so well made for you which blows me away; that’s the kind of standard, the kind of personal interaction with my client and also the quality of the clothes that I want to make. 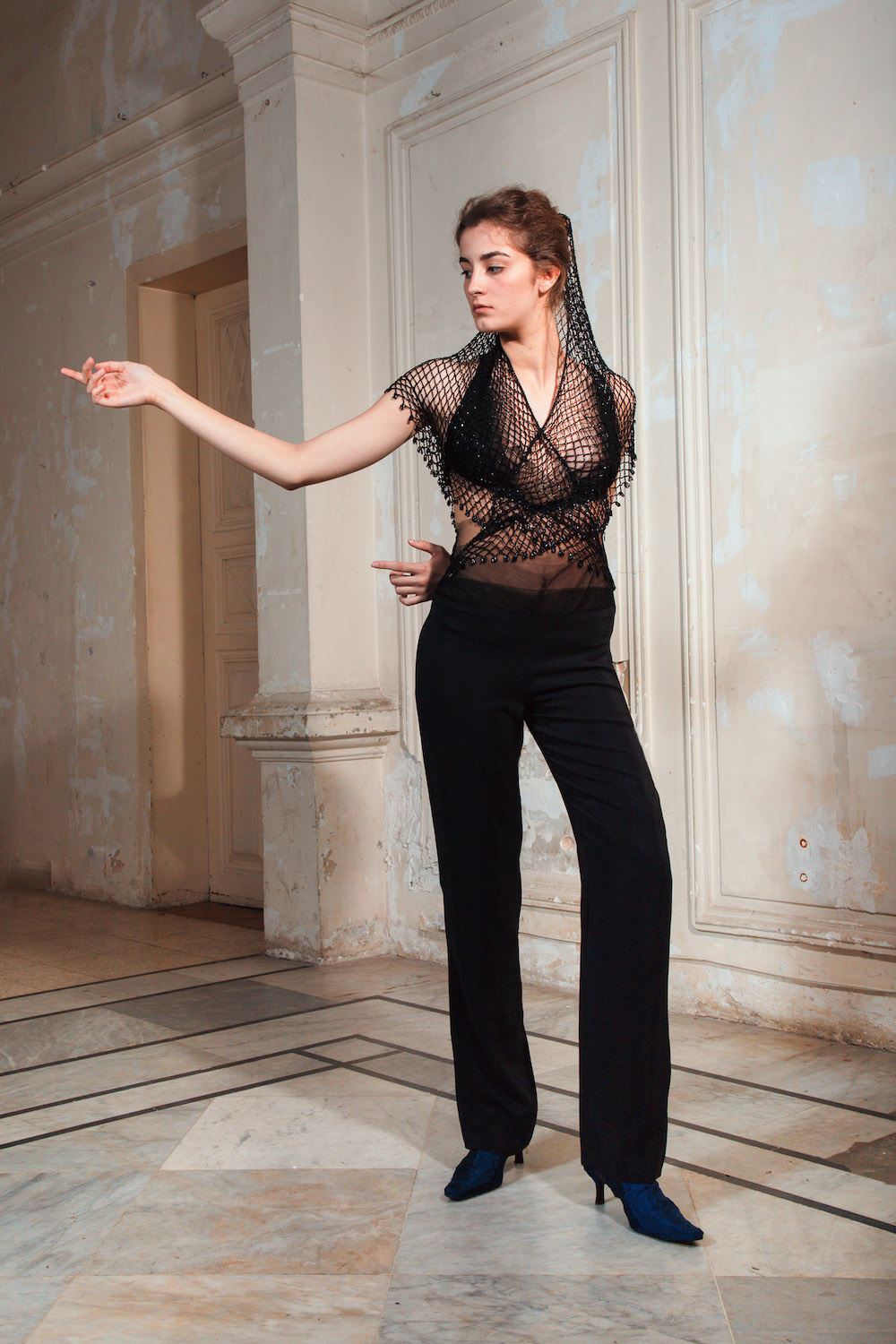 Your debut collection was innovative and offered a fresh outlook in how antique clothing and textiles can be transformed for the modern and social-conscious woman. How did you come up with the concept?

I came up with this concept, it’s been in the making for a while and I think it’s not just a concept for this collection, it really is my way of working. My Swiss family used to be textile producers, Switzerland used to be a big textile producing country. They collected very interesting things from around the world, I had a lot of pieces in my grandparent’s house which belonged to my great-grandfather and great-grandmother which they got from Egypt, Asia…They were special pieces that have amazing textiles like hand printed silks and they were always kept in boxes which was such a shame.

I finally convinced my grandmother to start giving them to me and I ended up making my first collection out of these pieces. I keep integrating them, they’re always a good starting point since they’re very beautiful fabrics. It really started from what I found in my family home and how I wanted to give these materials a second life. The cuts are very old-fashioned and you could never wear them now, they’re not flattering or modern so it was really about how to make something that old, take it out of its original period and bring it back very strongly and loudly and with a lot of femininity into the 21st century…that’s sort of what drives it.

What made you choose to showcase your collection at Mansion?

I have had my studio at the Mansion since November and it’s such a unique space…I don’t think just in Beirut; I actually think like world-wide. It’s very dynamic, and everyone working here is very serious and committed to their projects and it’s one of the reasons I came to Beirut. There’s such a creative drive. I thought it was the perfect place to host the show because it has this nostalgia but at the same time people working here are very driven, focused and do an incredible work and I think it balances also very well with what I’m doing which is nostalgic in a way. It’s romantic but at the same time I’m sending a strong, loud and modern message so I think it’s actually the perfect place. 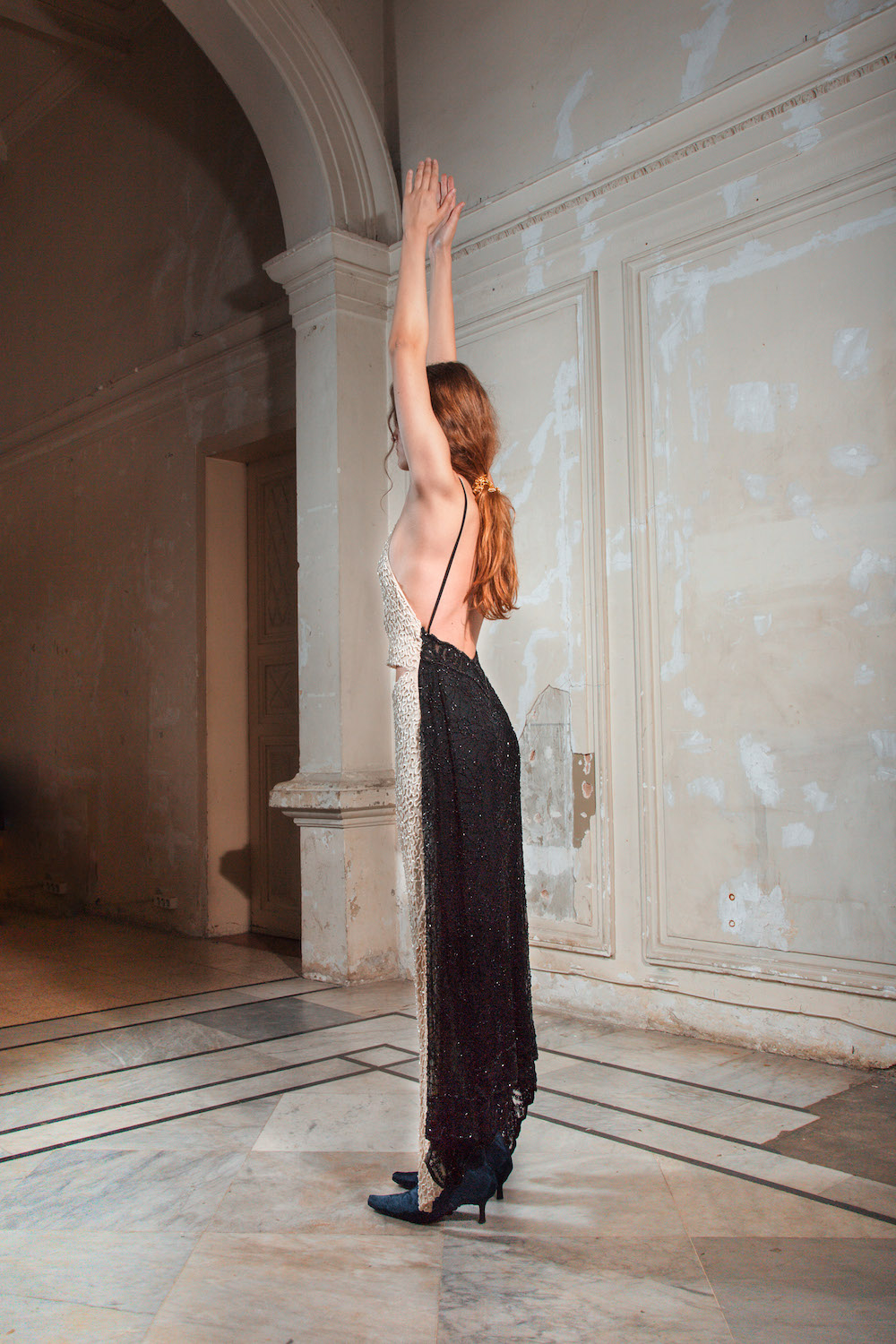 Why did you choose to open your atelier in Beirut?

(laughs) I know it’s a hard question, because it just happened, I was like I have to be here. The reason why is because when I graduated Brexit had just happened and at the same time I was celebrating the end of a very tough and very formative degree. The whole city of London was like ‘what just happened!’ and the mood was very very depressing. At the time I came to help my friend, Rym Beydoun, (who’s got a label here called SuperYaya) to help her launch her label in 2015. It was super hot in July, August and I was just like I love this place! But it’s like what I said earlier, people our age who are really driven and passionate about their projects and work and they’re doing two jobs and then doing this other project on the side and that creative drive and that energy was very addictive and very nice to be around.

It’s not easy but people fight very very hard and it’s not necessarily money driven but they’d think ‘I have this idea and I want to realize it’ and that kind of passion was very inspiring to be around. I also think that with my concept of working, sort of, with waste and making something very new, I was very welcomed here. This city is buzzing and there’s a lot happening. 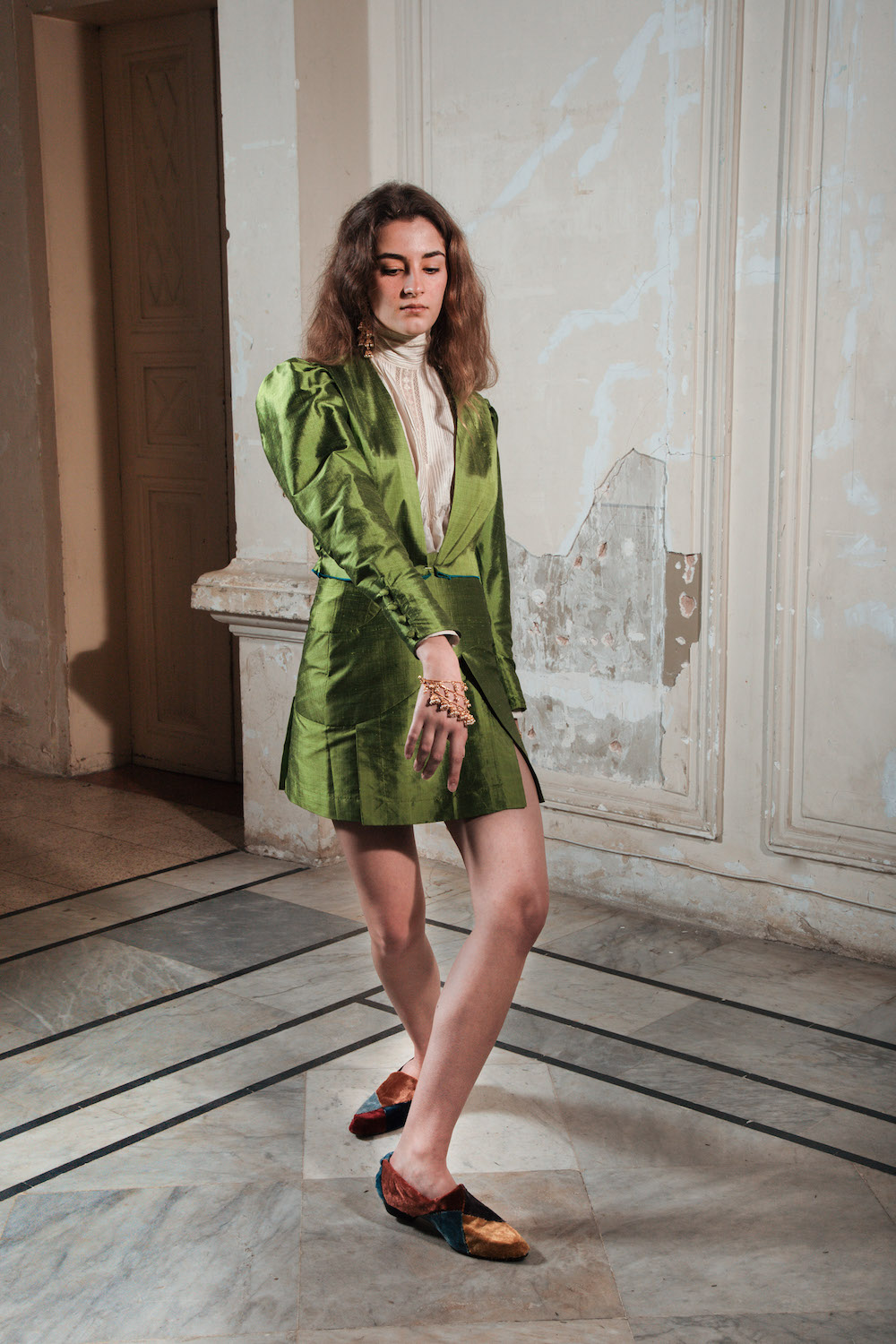 How does Lebanese craftsmanship differ from other places around the world that you’ve visited?

Well I think craftsmanship everywhere is very unique and here I think there’s a lot and there used to be enormous amounts of craftsmanship and I think it’s still lingering, it’s a bit like these old houses, like Mansion. It’s still tucked away in corners and hidden and what’s kind of a charming thing about it is that you’ve got to go and find it. For me, it’s about the relationships I build with the craftsman I work with. I like to give them a lot of creative freedom sort of like “this is my idea, but what would you do? How would you take it?” I don’t want to just impose myself because I have a lot of respect for crafts and I want to work respectfully with it.

Here, there’s such a richness and history to all these crafts, you could just write a book about it, I think it’s fascinating. It needs support, not just here but worldwide. You saw how these women downstairs were working on incredible cushions and you want to bring attention to it, it’s incredible work. Sometimes they need to get modernized and you have to breathe some fresh air into them. 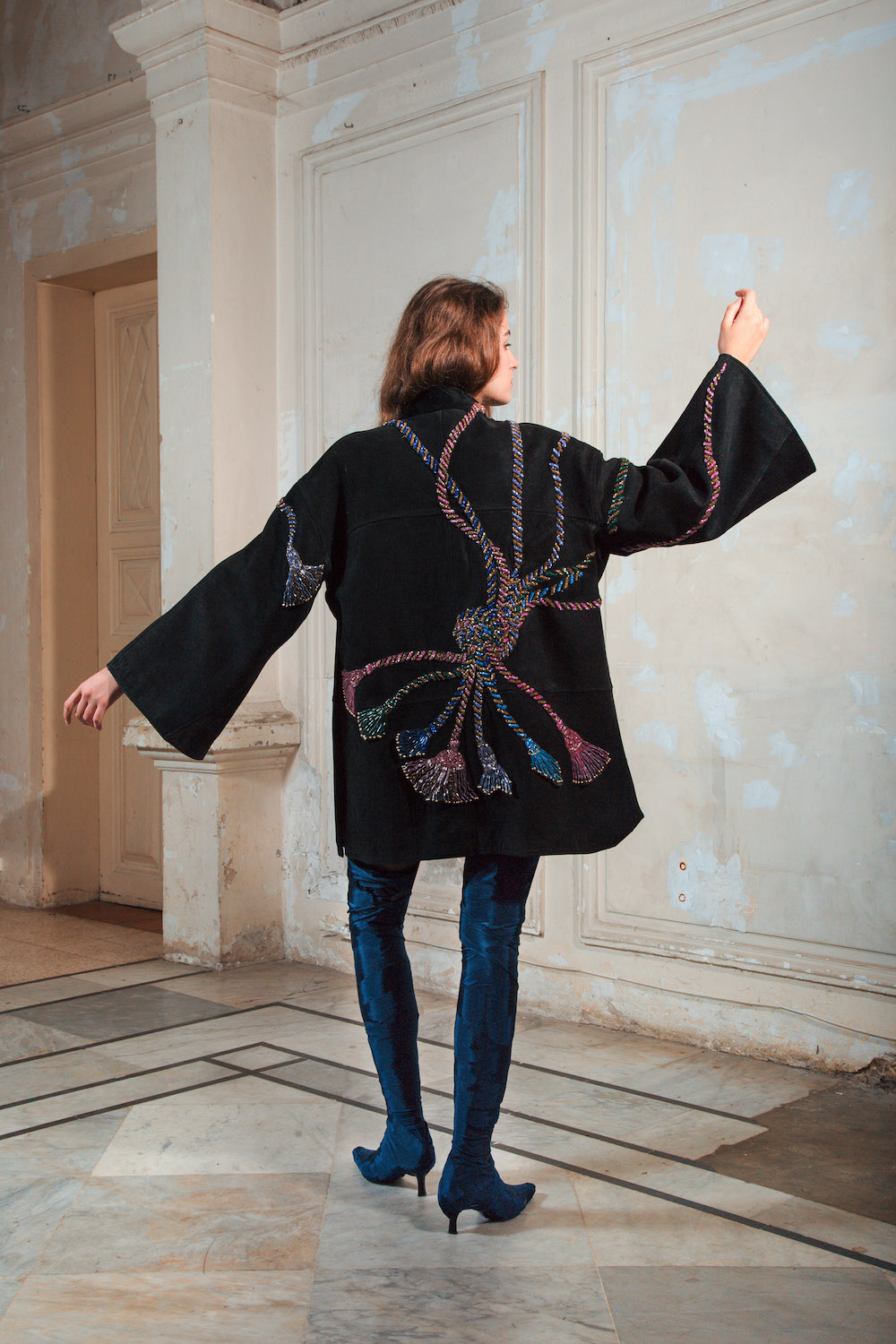 What are your views on other up-and-coming designers in the Arab world? Is there anyone in particular that you find has inspiring work?

I find my friend Rym (Beydoun) very inspiring because what she does is super cool and different. It’s really fresh and it’s got attitude, glamour, and sophistication; what she makes is also very personal and I really like that. There’s also very amazing work happening with Aseela, I really like them; they also work with these beautiful and old collected fabrics and they’ve been collecting for years and years. They work in a very respectful, creative and innovative ways with these old pieces and they put lots of different things together.

Now I know it’s not necessarily design but I like L’Artisan du Liban, Soraya is collecting incredible pieces and it’s also very personal. There’s a delicate sense of what is very fine and what’s being produced here and I really admire that. There are so many designers here, every week it’s “have you heard of this person?” “How do you not know this person?” It’s booming, it’s so exciting and it’s wonderful.

What are your future projects? What’s the next step for your brand?

It’s so exciting, there’s a lot coming up…In a traditional fashion house, you have the couture, then the pret-a-porter, and then the mass productions; I kind of want to set up the same system but obviously entirely up-cycled. So we’ll have what you’ve seen last week, the couture, the high-end, the bespoke, very traditionally as well, it’s a showcase of the creativity, of possibilities and then already take one step down, and working with slightly bigger amounts of waste and produce slightly easier pieces.

I don’t want to compromise. A lot of people have given me advices like “just have  up-cycled patches on it and just make it the normal way”; that’s what a lot of people have done, like Margiela, and all these houses who start off with this kind of creativity and then produce normally. Of course, business-wise that would make sense, but the whole point is to really carry this through. So having more accessible pieces, more shirts, flattering and elegant pieces and then afterwards actually have the mass produced which is obviously a big project. It’s working with enormous quantities of waste and working with the textile reproductions and producing new textiles based on this waste.

There’s really not a lack of it, it’s a just a matter of finding a way to make it structured and simple…so that’s the big plan. But coming up, I’ve got a really cool and exciting collaboration with Recycle Lebanon with sea plastic, producing something actually very high-end and work together to create something beautiful. I think it’s very exciting because it’s growing. It was a debut collection and it’s a very fun place to be, it’s hard work but it’s happening! 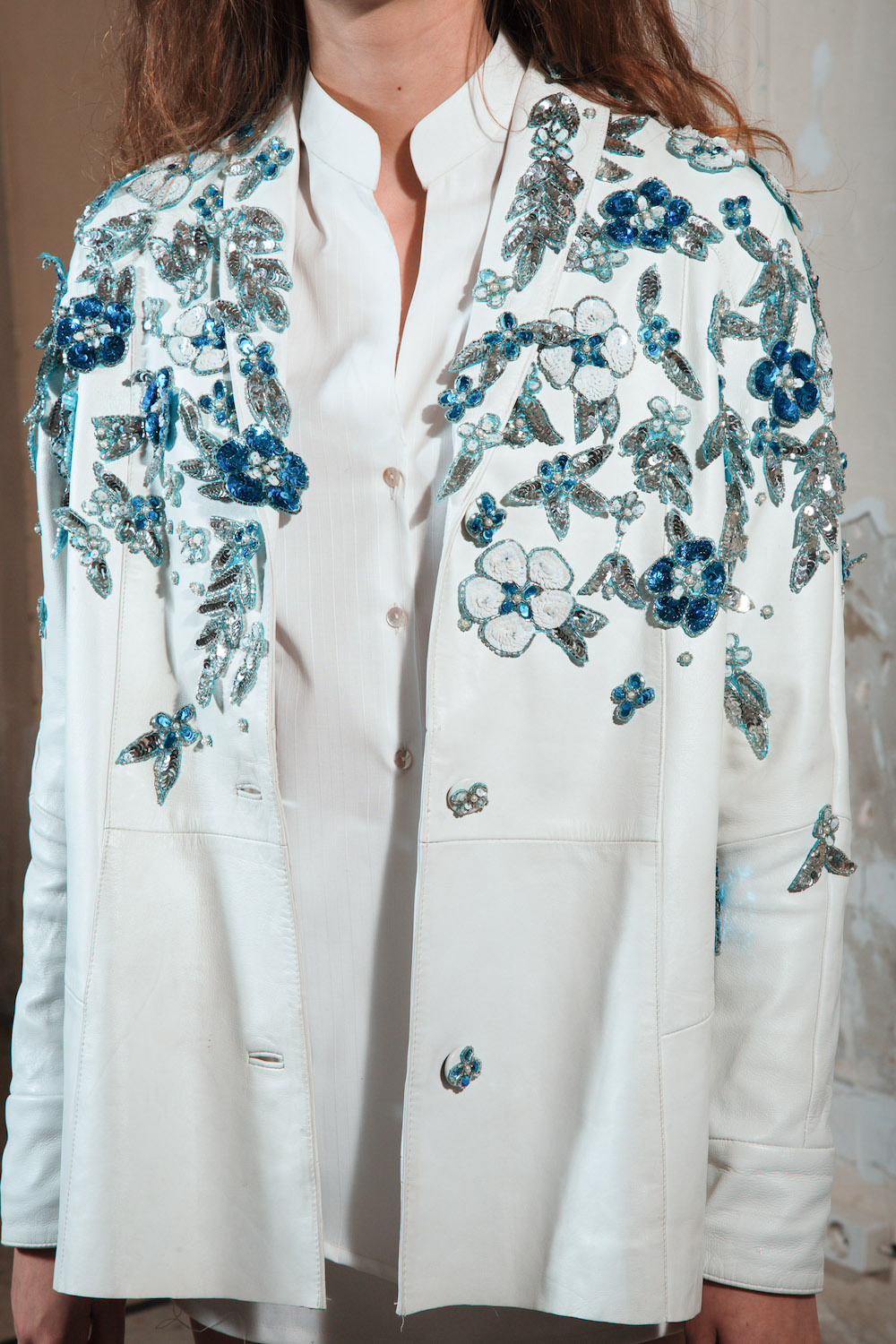 In what ways would you want to change consumer attitudes towards sustainable fashion?

I want to change consumer attitudes really not in a lecturing way, I don’t want to blame the consumer for anything but what I want to change is what we regard as luxury. Currently, luxury is brand-new, super clean and you know, this immaculate machine-produced thing. There’s a huge consumerism urge. What I’m trying to do with my work is actually just change that mindset, that ‘new’ is not at all the ultimate luxury and that there’s so much more worth in things that are sometimes older; there’s one piece in my collection, an orange and white kimono, and it’s made out of my grandparent’s old kitchen curtains which were a beautiful cotton.

They were hanging for maybe thirty years and the sun has faded them just in the middle area so it’s made an incredible effect; also the fabric’s really thin, so light and it feels so luxurious but that’s like thirty years in the making! That is my concept of luxury: that’s irreplaceable and charged with history. The kitchen is sort of the center of the house and family. It’s sort of like trying to change that mentality, you can work with what you have, and it can be way more creative, beautiful, and original. It’s not that alien, though it seems alien now.