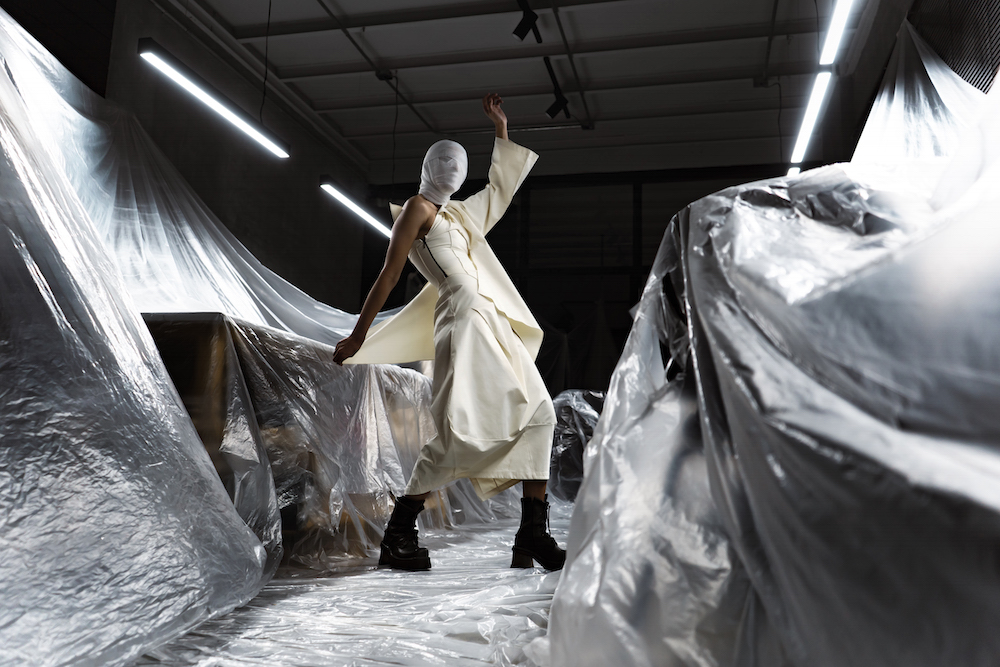 
Danah Alzaman is a fashion designer, born and raised in Eastern Province, Saudi Arabia. Growing up, she drew inspiration from her mother’s creativity and passion, and eventually started developing her own passion for art and design. Danah pursued a degree in Fashion Design and Textiles at the University of Sharjah in the United Arab Emirates after which she invested a lot of her time traveling around with the purpose of expanding her technical and ethical knowledge in fashion; this was a very significant journey where she found “the power to derive meaning and transform moralities through constructing clothes.“

Wanting people to be part of the story of her brand and design process, Alzaman puts a lot of emphasis on the wearer and their perception. She usually first starts with a concept, then interviews different people to showcase their character and personality and says she has a story in mind rather than a specific person whenever she creates.
Multifunctional, her pieces support a diverse and, at times, fast-paced lifestyle; this versatility is something she’s been focusing on since the very beginning, as she loves to create outfits that “can be changed and customized throughout the day.”


Danah, who is all about awareness and people living stories and experiences through her creations, first debuted with Chapter I: Embracing The Absurd, a collection that was solely black, beige and white. An interesting choice that she explains: “The collection talks about the gap between reality and illusion. After multiple talks with different people of different backgrounds, I came to the conclusion that everyone has their own reality, but can we know the actual truth about reality itself? I guess not. I kept asking myself what would happen if someone experienced that awakening moment.
The collection started with the color beige which represents comfort, neutrality and conformity; the state of one’s mind before the realization stage.
When we start realizing that life is not how it looks, the illusion of reality gets destroyed, forming a gap between our perception and reality itself. The color black which represents all that’s absurd and unknown starts forming and reforming one’s perceptions. It means that shapes and silhouettes will be deconstructed and reconstructed to reach that final stage of realization and acceptance.“

Beyond beautiful designs, Alzaman also foresees the sustainability dimensions of running a fashion label by opting for a seasonless approach and plans to “shift to a pattern-making digital software to minimise waste while testing, sampling and producing.“

Previously working from “a tiny space on (her) house’s rooftop” , Danah just recently moved into her design studio this past year, a year that hasn’t been
easy on anyone but that she acknowledges gave her the time to reflect on what was really important and got her back to the basics of creating. About Saudi, her home country and base, she confesses: “The fashion industry grew so much in the past 2 years. The Saudi government is investing heavily in local talents.”
With promising governmental initiatives to develop the fashion sector in the country, it seems change is coming very fast and Alzaman feels she’s at the right place at the right time: “It is exciting to be part of this transformation.“

As she looks forward to the bright future of fashion in Saudi, Alzaman has exciting plans coming up as she’s currently working on a second chapter “The Healing Remedy” with the “illusion of reality” as a concept: “It talks about addiction in different forms , it tells a story of the “saboteur” who managed to sabotage his own life, leading him to escape his reality and create his imaginary world.” She carries on saying that the collection would be “a visual representation of what he went through and his journey back to reality.”

This new beginning enforces Danah’s ambitions to achieve “self-awareness, sharing stories and experiences” with her designs.