A final shoot for her brand in Lebanon before relocating, fashion designer Larissa Von Planta collaborates with Lebanese photographer Rayan Chehab, delivering a neo-nostalgic shoot that well captured the essence of our forever Beirut. We’ve interviewed Larissa to get an insider look on her brand, her latest collection and get details about the shoot.

“I am constantly surprised that a​ ​textile which is 50 plus years old often looks nicer and feels far more luxurious than a piece which is not even 3 years old. I am a snob for the old.” 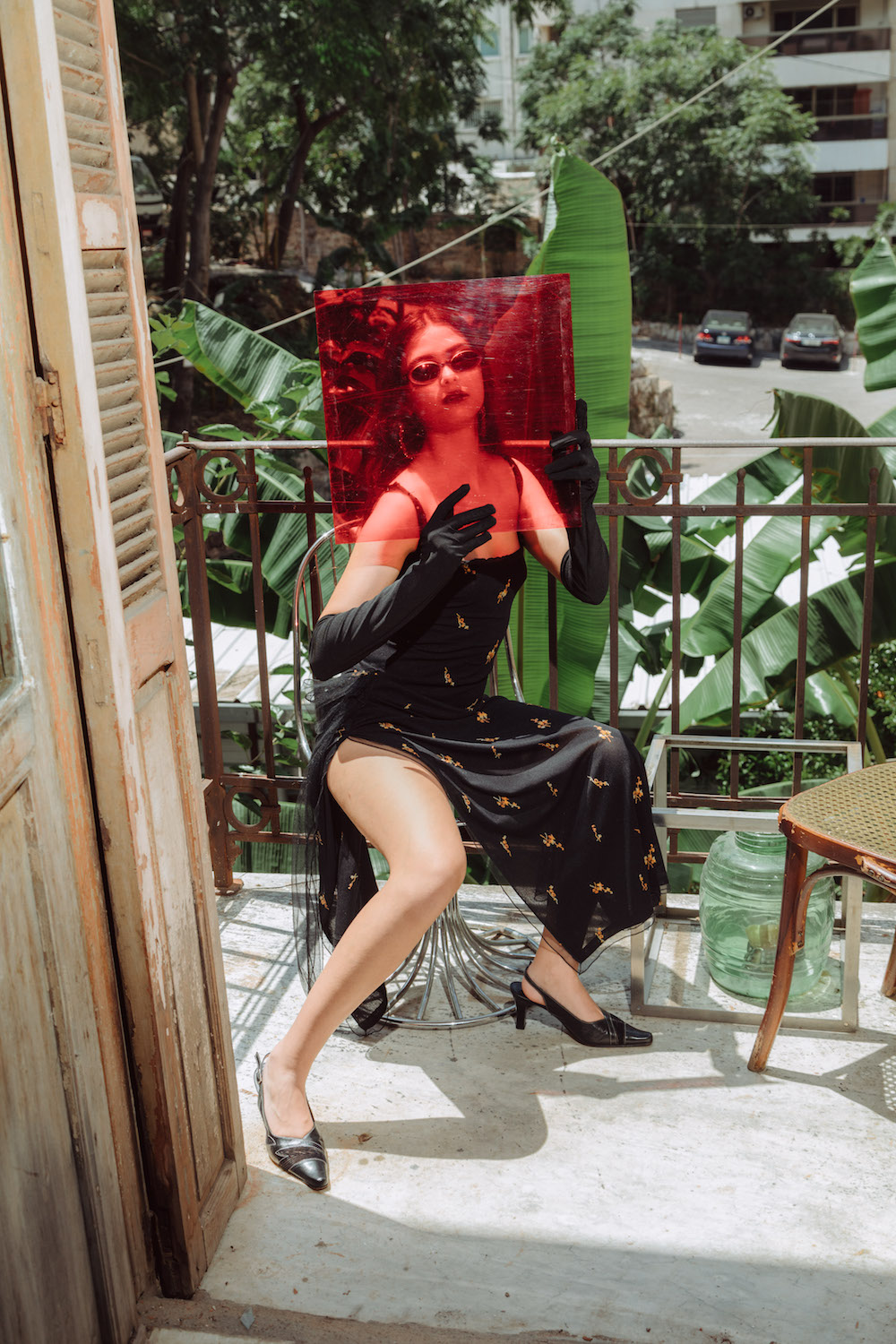 Tell us a bit about yourself, your designs and concept.

I spent four years in Lebanon from September 2016 to July 2020. I grew up in London and in the South of France. After finishing my degree in womenswear fashion at Central Saint Martins (CSM) in 2016, I came to Beirut to start working here in Fashion. I found many opportunities but for me the most exciting thing was creating my own designs. Many people approached me with textiles that they already had, such as inherited family pieces or collected ethnic or artisanal pieces which were not wearable because of shape or cut… I started to look at these garments as textiles and began reworking them, taking them out of their original context and tailoring bespoke and precise pieces which would honour their history but also bring them full swing into the 21st century!

Your brand chooses sustainability. What is your upcycling philosophy?

I have always been inspired by beautiful hand-made and embroidered textiles. My Swiss side of the family worked in textiles and collected pieces from across the world. I was lucky enough to grow up with these and work with them for my final collection at CSM. I believe upcycling to be so creative, and although there is a lot of fascinating innovation going on in sustainable fashion at the moment, creating something new out of something which already exists remains for me the most reasonable and sensible way to produce fashion consciously and sustainably.

The added benefit is that these older textiles are often of far higher quality, whether because of the hand finishings, the way they were milled or the non-synthetic fibers that were spun; that makes them more durable. I am constantly surprised that a​ ​textile which is 50 plus years old often looks nicer and feels far more luxurious than a piece which is not even 3 years old. I am a snob for the old. 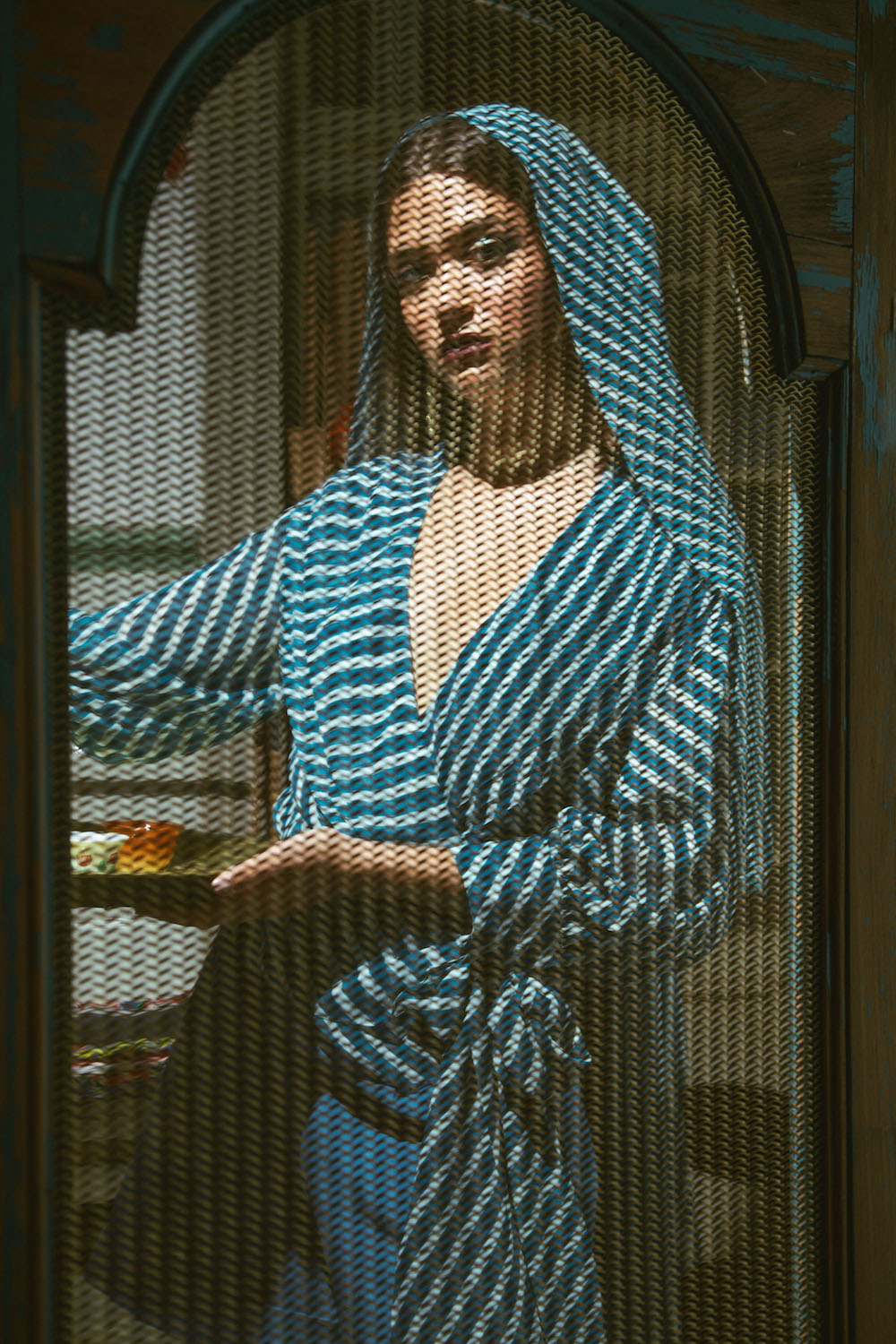 Tell us about the shoot you made with Rayan Chehab at the Mansion, in July 2020.

I told Rayan that I was leaving a month ago. We had done our first shoot together in 2018 and wanted to celebrate our collaboration one last time. Most of my studio was already packed up and Ray thought we should shoot amongst the bags and the mess. I am not the only person leaving Lebanon at this point in time so it felt appropriate. I have always wanted to shoot with Isabella Khoury (a Lebanese model represented by Green Apple Agency in Beirut) and I was so happy to work with her. I didn’t have much to do with the makeup, photo direction or layout. I wanted to let Ray do his thing entirely. It is nice to let go sometimes.

What is your favorite piece from the collection and why?

The blue striped blouse is based on one of mum’s blouses. I still see her wearing it and always wanted to borrow it. I found such a great team in Lebanon and it was made there whilst I was back in London with my family to look after my mum who was very ill. I think it says a lot about last year.

What is next for Larissa von Planta?

I am moving my studio to London, another city I love and which is full of creativity. It will be a totally different scene to Beirut and I will miss Lebanon dearly. These last four years have really formed my creative direction. I wouldn’t have gotten this far had it not been for the support, openness, creativity and I guess, a certain freedom in the chaos which I encountered. Until we meet again!