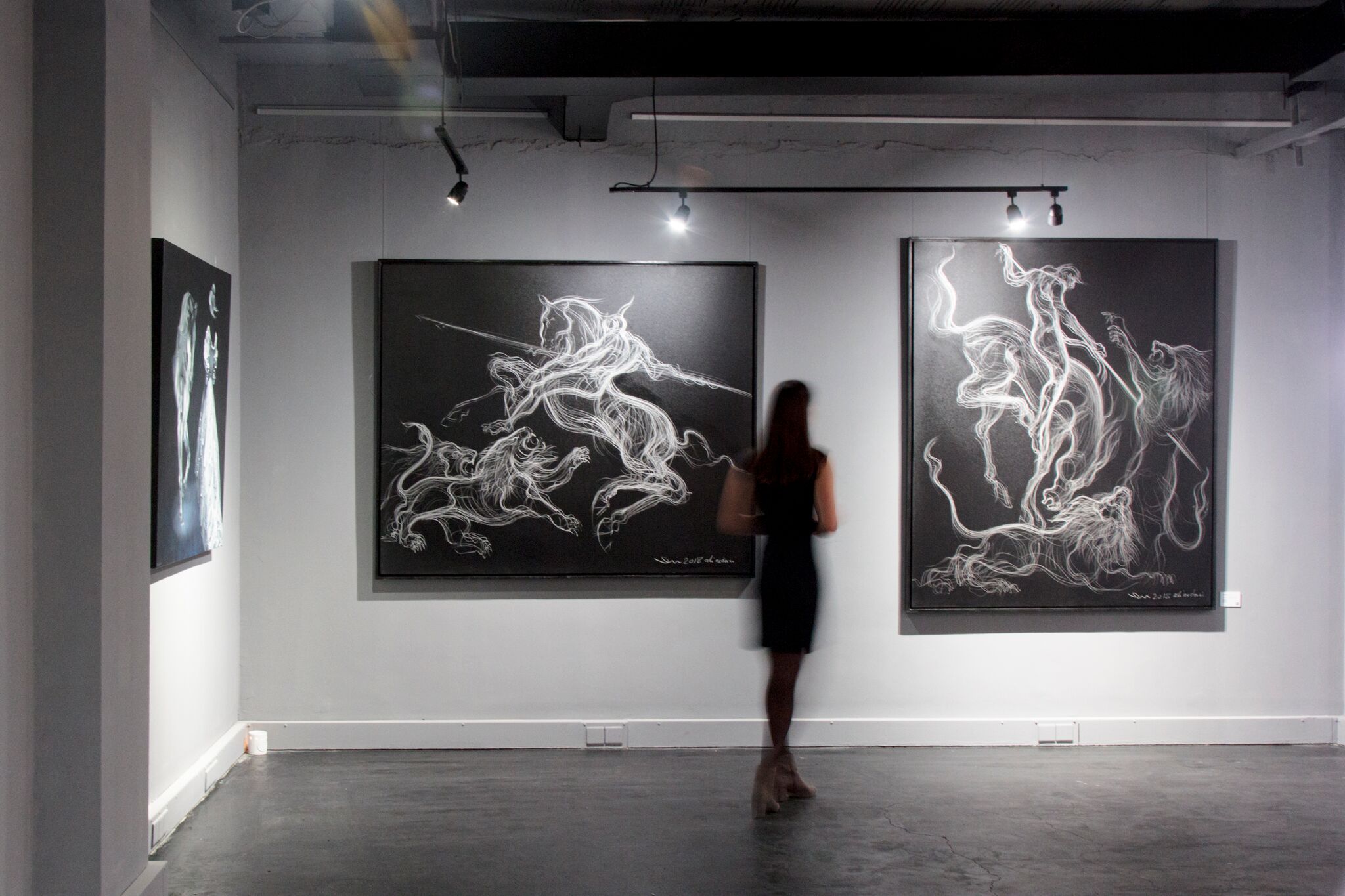 CAMA Gallery: From Tehran to London

Following the success of their exhibition space in Tehran, CAMA Gallery, specialists in Modern and Contemporary Iranian art, have opened the doors of their London gallery on the 5th of April with an inaugural exhibition featuring 19 Iranian artists. It is the only gallery in London to curate Iranian art exclusively, offering contemporary artists exposure and global recognition.

Their first exhibition, entitled “Sensation”, is dedicated to contemporary luminaries from Iran, presenting various works of artists from diverse themes and styles, ranging from hyper-realistic painting to calligraphy.

We had the opportunity to chat with Fereydoon Omidi, one of the artists part of the first exhibition at CAMA.

Tell us a bit about your journey as an artist.

As far as I can recall, since my childhood, I have been interested in calligraphy and painting.

During elementary school, I was not studious nor did I have particularly good handwriting. In fact, I remember being told off continuously. However, I did enjoy working on my calligraphy. By middle school, in addition to practicing calligraphy, I was also drawing the objects around me. Later in conservatory school I chose to study Graphics and familiarised myself with a wider variety of artistic techniques.

In conservatory school, we were taught architectural drawing. There, we painted, drew and designed posters and logos, and took it very seriously. During that time in the school, we were studying the importance of lines in graphics, as well as art history, hand printing, screen printing (silk-screen) and photography, including photographic printing in the laboratory. In university, after my mandatory military service, I focused on my painting. I have had the best training courses at Azad University, where I was taught by the best lecturers in the fields of painting, art history and drawing. Also, my fellow students were all so energetic and motivated, each attempting to present their best and pushing us all to do better. In time, they too have become well-known artists.

Since 1990, I have exhibited my works in more than 70 group and 20 solo exhibitions in Iran, France, Italy, United States of America, England, Lebanon, United Arab Emirates, Japan, Armenia and Monaco. My paintings were entered in a few art auctions, too.

Since 1995, I have been lecturing at the Azad University, where I constantly work to improve my teaching methods. I feel that I am always teaching and always learning, and this fuels my love for what I do. Currently, I work within the fields of painting and calligraphy, simultaneously. I try to give each similar weight. I have also practiced photography, installation and video art and am willing to explore further. Recently, though, I have been heavily focused on my art, trying to expand my experiences and personalise my techniques. While I have obtained a master’s degree in painting, from the Tehran Art University, I feel that I will never want to stop learning. 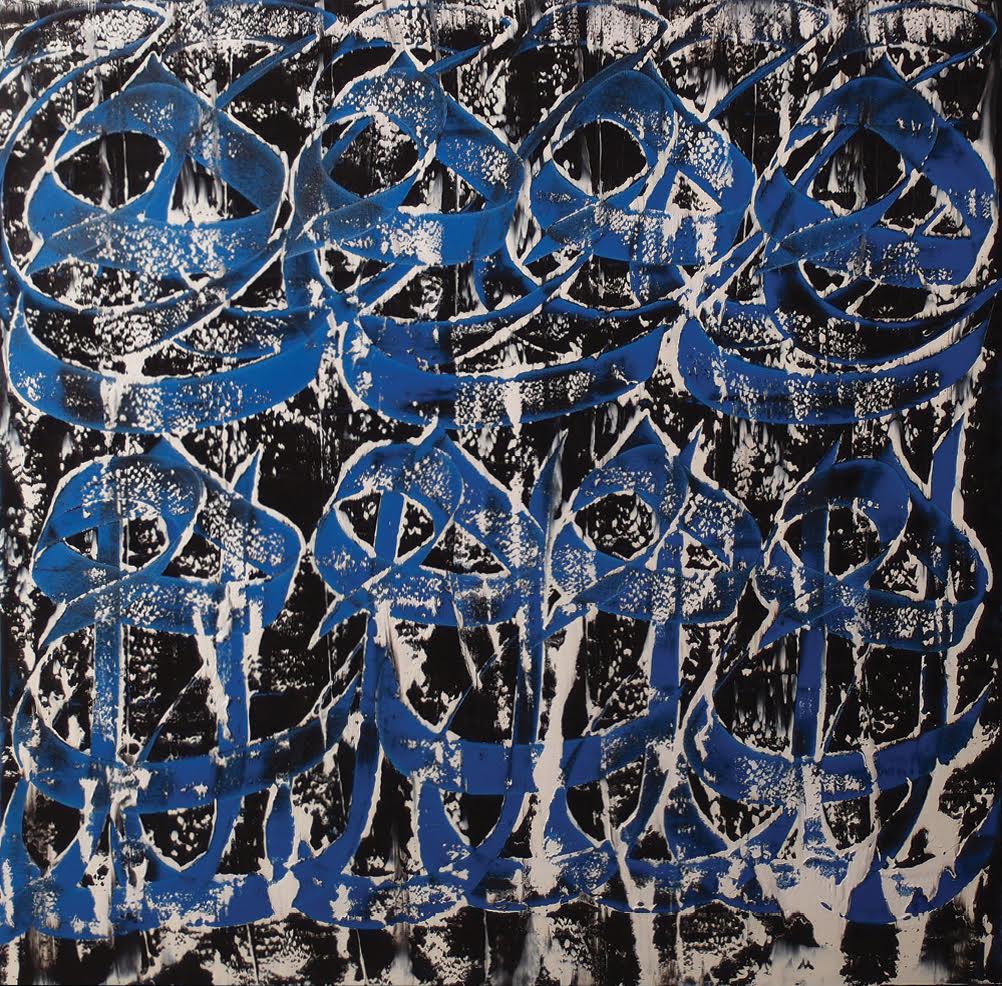 What was your main inspiration behind your pieces for the CAMA Gallery in London? (“Blue” and “UK”)

I began the series of the flags with the Persian calligraphy in their background towards the end of 2012. Some works from the series have been showcased in the Opera Gallery in Paris, in 2013, and the completed series, included of flags of Iran, France, England, United States of America, Russia, China, Saudi Arabia, Turkey, Iraq, Syria, Qatar, Lebanon, United Arab Emirates, Azerbaijan, Monaco and Morocco, was exhibited in London Opera Gallery, in 2014. In the Flags series, the main idea revolves around the role of Persian calligraphy and its relationship with the visual signs in other cultures. A speechless language, but poetic. A rhythm is born from the Persian letters and it extends across the flags. This is symbolic of the relation between Eastern and Western cultures, between Persian and Latin. When put in conversation, they speak to the coming together of these two cultures through art.

In the case of the piece of England’s flag, repetition is key. In the lines of Persian characters, letters are pulled on a horizontal line from right to left. This produces a rhythmic motion that makes the image of the flag look more impressive. Merging Eastern and Western visual symbols through the lines of calligraphy and the lines on the design of the flag create an image of cohesion, giving the piece a poetic feel.

In my other piece exhibited at CAMA, “Blue”, the glittering blue colour over the Persian scripts and the colourful background in the flag make the colours sparkle more; they shine like stars and wink. This decorative shining, in the Eastern culture, is symbolic of the sky’s colour and presents the infiniteness of the sky and the sea. 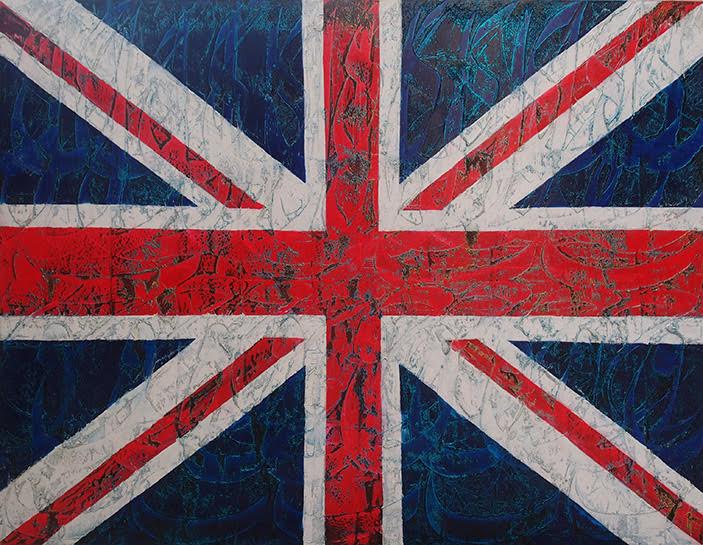 Which mediums and colours do you prefer to use? And Why?

I generally work with oil paints and use a thick volume of the colour on canvas using a spatula. I create the shape of Persian alphabetic characters out of this compact volume of colours, to make a deep and textured surface. While adding/removing/scratching out layers of paint, I leave a waterfall-like texture on the canvas, to make my paintings diversified and unique.

How is your work received and perceived internationally?

Contemporary artists are looking for new ways of expressing their art and challenging their audiences. This is true all over the world, regardless of differing political or geographical realities. By altering their techniques and searching for new messages, artists push viewers to reflect on the past or look to the future. I believe one should try to be consistent and follow his own artists path, to achieve more personalized methods, and allow the viewer to enter the artist’s mind and enjoy his work or accompany him on his journey. I am proud of my success internationally and am glad to share my artistic journey with other people from different kinds of backgrounds. 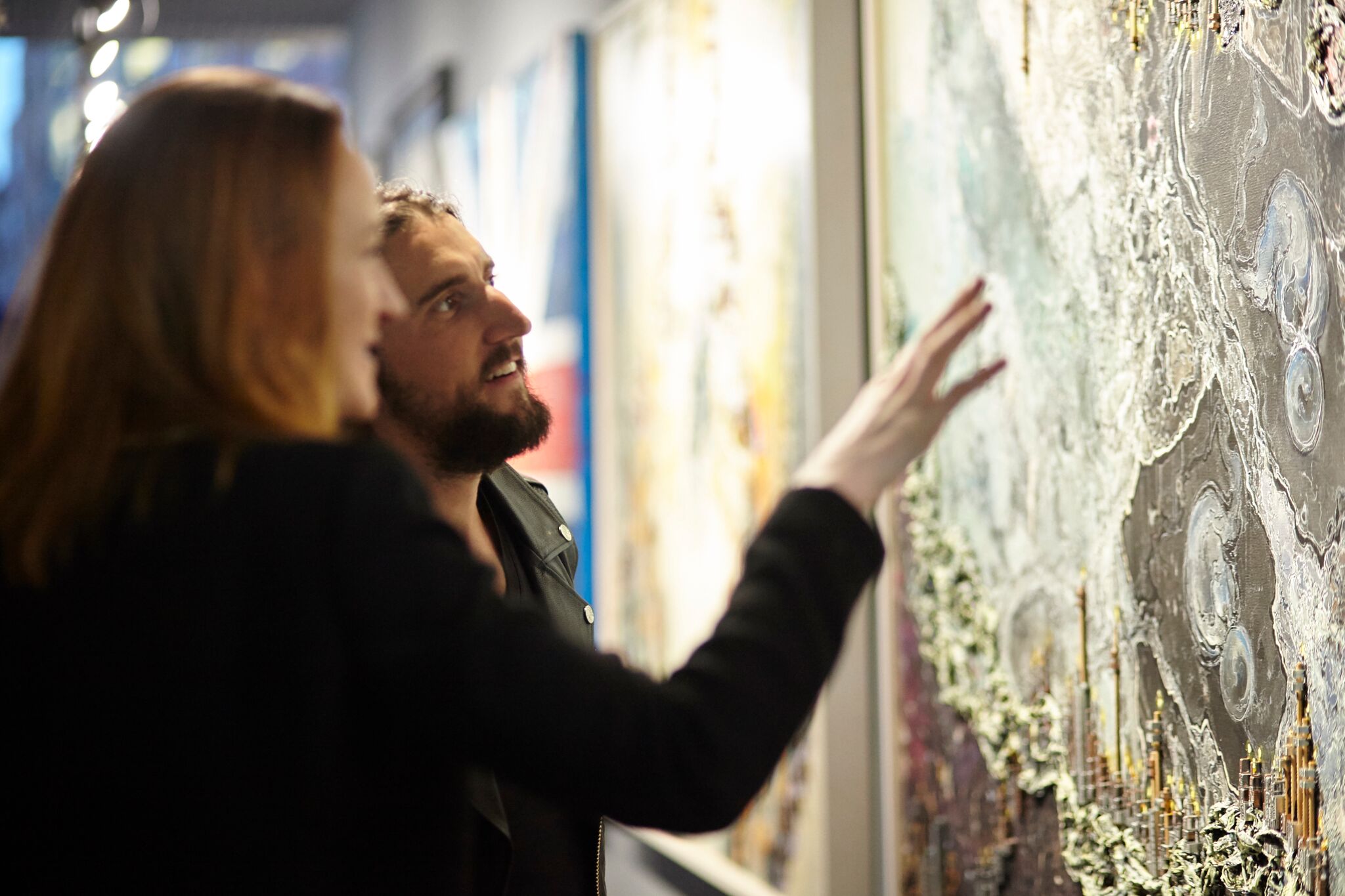 You are fascinated by calligraphy, what role does it play in your art?

Calligraphy is an art based on semiotics, signs and symbols, and may appear completely contractual while it is in truth very subjective. It is a kind of beautiful performance of moving figures; fluid, poetic and imaginary. It has pleasant divisions and combinations that form a message, like a lyric poem in the form of a picture. In addition to presenting an enchanting and moving rhythm of intertwined shapes, calligraphy is also a way for me to explore my skills with oil paint as well as more unconventional materials. I believe it helps me grow as an artist.

How do you perceive the emerging Iranian art scene nowadays?

The current Iranian art scene is on the rise and is changing rapidly. As communication networks become more accessible, crossing geographical boundaries and connecting all corners of the globe, a mutual language will be shaped. The pace of this change is remarkable, the whole world is undergoing a tremendous transformation. Artists are the products of their own era. The concepts of art, also, will change and a new generation of artists will be able to use all the achievements told by art history more comfortably. The variety of artistic experiences will be benefit from increased exposure and braking barriers. New tastes will be found and generated, as well as new artistic techniques.

Fereydoon Omidi’s artwork will be exhibited at CAMA Gallery London until the end of June.