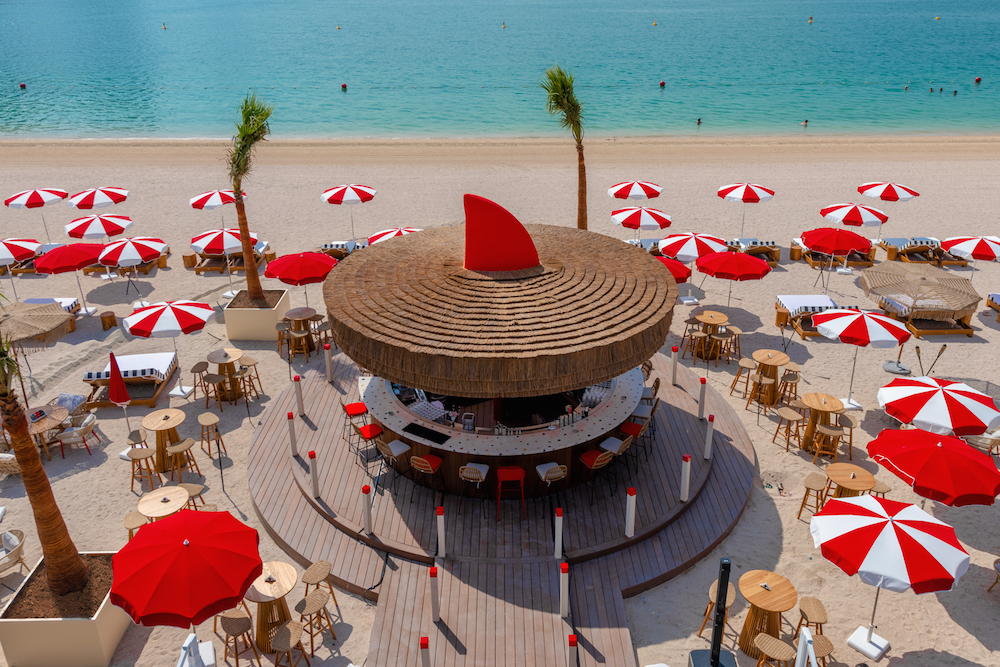 Ever wondered who is behind the audacious designs for Uberhaus, AHM, B018.DXB, February 30 Dubai and more recently Nisrine Restaurant in Qatar?
It is none other than Rabih Geha Architects led by husband-and-wife team Rabih Geha, the Founding Architect and Ghida Geha its Managing Partner.
This multi-award-wining studio actually contributed to the establishment of a Beiruti creative conversation, connecting design to context and culture.
Beirut being at the core of their inspiration but not the limit to their aspiration, they are now also based in Dubai.
For the first time, this power couple sits down for a joint interview, giving us the ultimate Design duo vibes like you never seen them before.
Rabih Geha Architects where #designgoals meet #couplegoals meet #lifegoals…

In this love story, Architecture has definitely played cupid.
The year was 2007, the pair met through a mutual friend when they had both recently moved back to Beirut from abroad: Ghida from Milan and Rabih from Paris. They were both sort of wide-eyed innocent and excited about their prospects and the future of the architecture and design scene in Lebanon and eager to explore what and how they could each, individually back then, contribute.
Ghida, an interior architect, was running her own studio (Blank Space) and teaching at the School of Architecture and Design at the Lebanese American University while Rabih was running his architecture firm and teaching at ALBA. Their paths were so similar leading up to that moment, it only made sense to join forces and for Ghida to devote her time and energy to their mutual clients and projects that required her expertise.
Thus Rabih Geha Architects was born in Beirut in 2006. The architecture and design firm reflects the couple’s dynamic as it forms a closely-knit all-women team apart from Rabih, making it feel like an extension of their nuclear family. Ghida is the more pragmatic one. Highly organized, a master of detail and particular about her taste. Very methodic both at home and at work. Rabih is at awe of her rigor, her focus and her discipline that ground him, they make his dreams easier to achieve and they put order in his chaotic world. He has always said: “I’m the captain of our ship but she is the compass.”
Ghida finds Rabih like a cyclone: he comes in throws big, audacious ideas and is determined to execute them, making her sound like “the bad cop” sometimes. However instead of destruction he leaves beauty in his wake.

First things first, one must ask: Is it easy mixing “business” and “feels”?

Ghida: We are always working, even when we’re not but I feel very lucky to share a home, a calling and a business with my partner. The fact that we’re husband and wife makes it very difficult to be “diplomatic,” or coded. If ever one is keeping their honest opinion to themselves the other is bound to immediately find out. But it’s interesting how Rabih, as intransigent as he is about his vision, is great at taking and incorporating criticism.

Rabih: No matter the disagreement, we always fall back on the one certainty that we each purely have the other’s best interest at heart and is only looking out for the other since, ultimately, we share the same goals and objectives.

How do you perceive yourselves as architects?

Rabih: Untethered, unattached to the restrictions of architecture and design as an exclusively visual or aesthetic outcome

Which project was the most challenging for you?

Ghida: This also has to be M1246, because of the situation and the parameters, which also made it one of the most rewarding projects to complete. Maintaining the traditional aspect of the property was an imperative for both the client, and us. And so modernizing it to fit 21st century living standards demanded great restraint. The building is seven generations old, with each generation having undertaken either minimal or punctual works limited to their needs at the time without considering the globality of the property. Much of our restoration effort is imperceptible, hidden from the naked eye behind walls heavy with seven layers of different color paint from four previous renovation efforts.

Rabih: I have to agree with Ghida here. This project to me embodies the true legacy of architects, which is to carry a city’s heritage forward and safeguard it for future generations. It took four years to complete the works that were either halted or interrupted more than once whether due to the Beirut port explosion or the pandemic. Every original feature was cleaned, polished, repaired or fixed to the extent possible. Some of the original foundations were buried under years of haphazard renovation and required us to uncover them layer by layer to arrive at the source. Ultimately it proved to be cathartic, and mostly gratifying, to be able to give Beirut back a piece of its past glory.
Four Seasons Rooftop, which we designed back in 2016 was another achievement timewise. We only had five weeks to conceive AND execute the space. It was meant to be a pop-up lounge for a few weeks of the summer but turned into a mainstay of Beirut nightlife for years.

What do you think are the strengths and weaknesses in each other professionally?

Ghida: I teach Rabih about management and he teaches me about patience. Also he is irreverent.

Rabih: She is a perfectionist.

What criteria do you consider for inviting new candidates on board Rabih Geha Architects?

Rabih: Strength of character and strength of vision


What do you feel unifies or ties all your projects together?

Rabih: The unexpected. They also reflect the anxieties and aspirations of the moment while being future-proofed for continuity.

One could only imagine the home of an architect: what did you guys value and curate while creating your home?

Ghida: Designing our home was one of our most exciting joint projects. Our styles mesh seamlessly when it comes to interiors, we’re drawn to the same art, colors and designers and we like the same eclectic-chic feel so there wasn’t much disagreement there. It’s also a very personal, ever-evolving space with items collected over time.