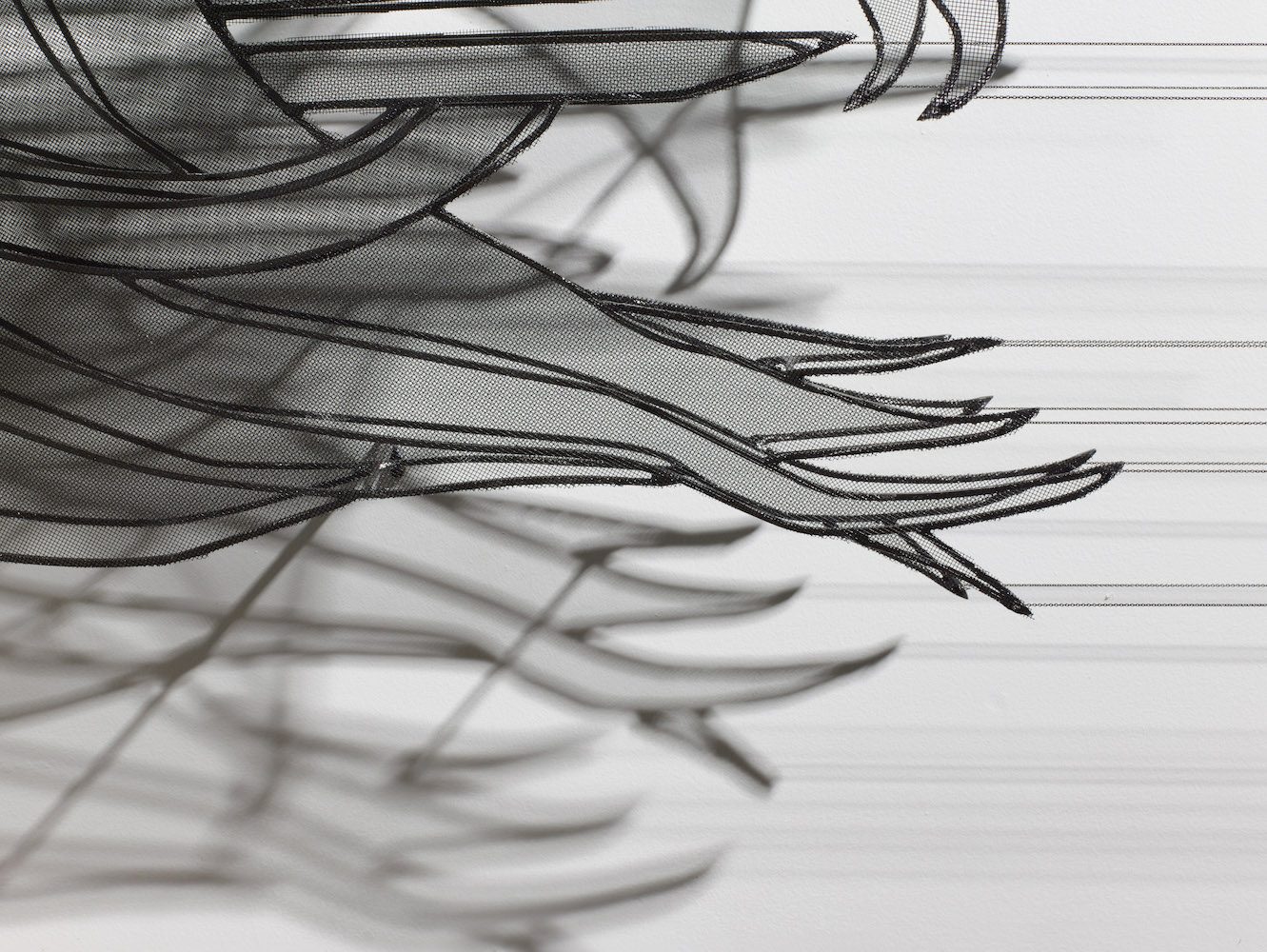 Afruz Amighi is an Iranian sculptor and installation artist based in Brooklyn, New York. Amighi’s celebrated sculptural wall pieces composed of industrial materials are influenced by the art and architecture of her home country. In 2009, she was the inaugural recipient of the Jameel Prize for Middle Eastern Contemporary Art, awarded by the Victoria & Albert Museum in London for work inspired by Islamic traditions. In 2011, she was granted a fellowship in sculpture by the New York Foundation for the Arts. In 2013, her work was commissioned for the 55th Venice Biennale. In the summer of 2018, the Frist Center for Visual Arts in Nashville, Tennessee will present the first major museum exhibition of her work. Amighi’s work is included in the collections of the Metropolitan Museum of Art, NYC, USA; the Houston Museum of Fine Art, TX, USA; the Cleveland Museum of Art, OH, USA; the Victoria & Albert Museum, London, UK and the Devi Foundation, New Delhi, India, among others. Amighi’s work has been exhibited in the United States, Europe, and Asia. JDEED wanted to know more about her and her latest project Echo’s Chamber, on view at the Sophia Contemporary gallery in London until January 19th 2018. 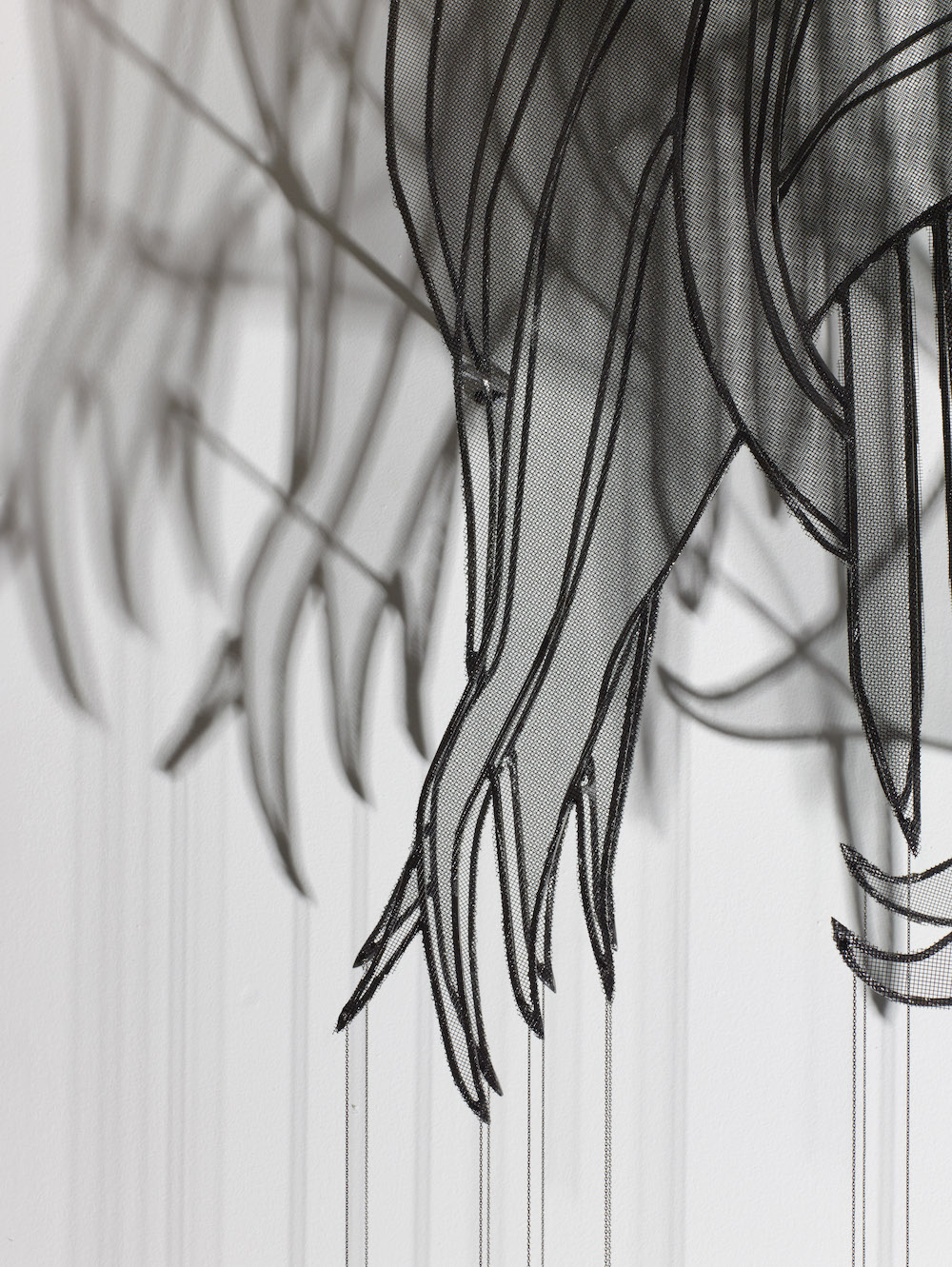 Please tell us a bit about your artistic journey: how did it start and how do you see it evolve?

Although I grew up in a very secular family, we celebrated holidays across the religious spectrum, primarily for their arts and crafts components. We made elaborate gingerbread houses, easter eggs, haft-sin tables etc.  I came to associate ritual with object making, and this was not something I wanted leave behind with childhood.  This experience imprinted itself on me in a love for excessive decorative elaboration, religious art and architecture, and a tendency to experiment with different materials and forms rather than stick to one formula. This compulsion, to break routines in art making, once they became formulaic, is what drives my work and forces me to evolve and grow.  Once the result of my process becomes known to me, it is time to move onto the unknown.

How do your Iranian origins influence your work and specifically in Echo’s Chamber?

Having been raised in the United States by an American mother and an Iranian father, everything ‘Iranian’ became a source of mystery to me as a young artist…a series of clues as to what my life and identity might have been like had we not left Iran. This fascination with my birthplace was a reflection of my detachment and estrangement from it, as are most fixations. As a result I immersed myself in Iranian culture. Although my focal points have changed as I have grown, (identity is often a shifting ground), the aesthetics of Persian art and architecture are deeply embedded in my sensibilities and I don’t think I could sift them out even if I wanted to. I believe this was something I absorbed at a very young age, preceding my adolescent ‘research’ into the subject.  In Echo’s Chamber, I think this sensibility is present, mainly because others have said as much…but it is so intuitive and unconscious that I don’t see it myself.

How did you translate your desire to explore themes of femininity in  Echo’s Chamber?

It started out one day in the studio when I was drawing and I found that I couldn’t draw any male figures, or rather when I attempted to, they were very static and kind of dead.  So instead, I began a series of female portraits, some based on historic female archetypes and others based on women in my own life.  This was where I found dynamism and contradiction.  I found symbols of strength and resilience as well as symbols of pain and oppression existing alongside one another in these drawings. They were not pre-meditated, in fact they felt very adolescent, kind of like a primal inner life falling onto the paper. 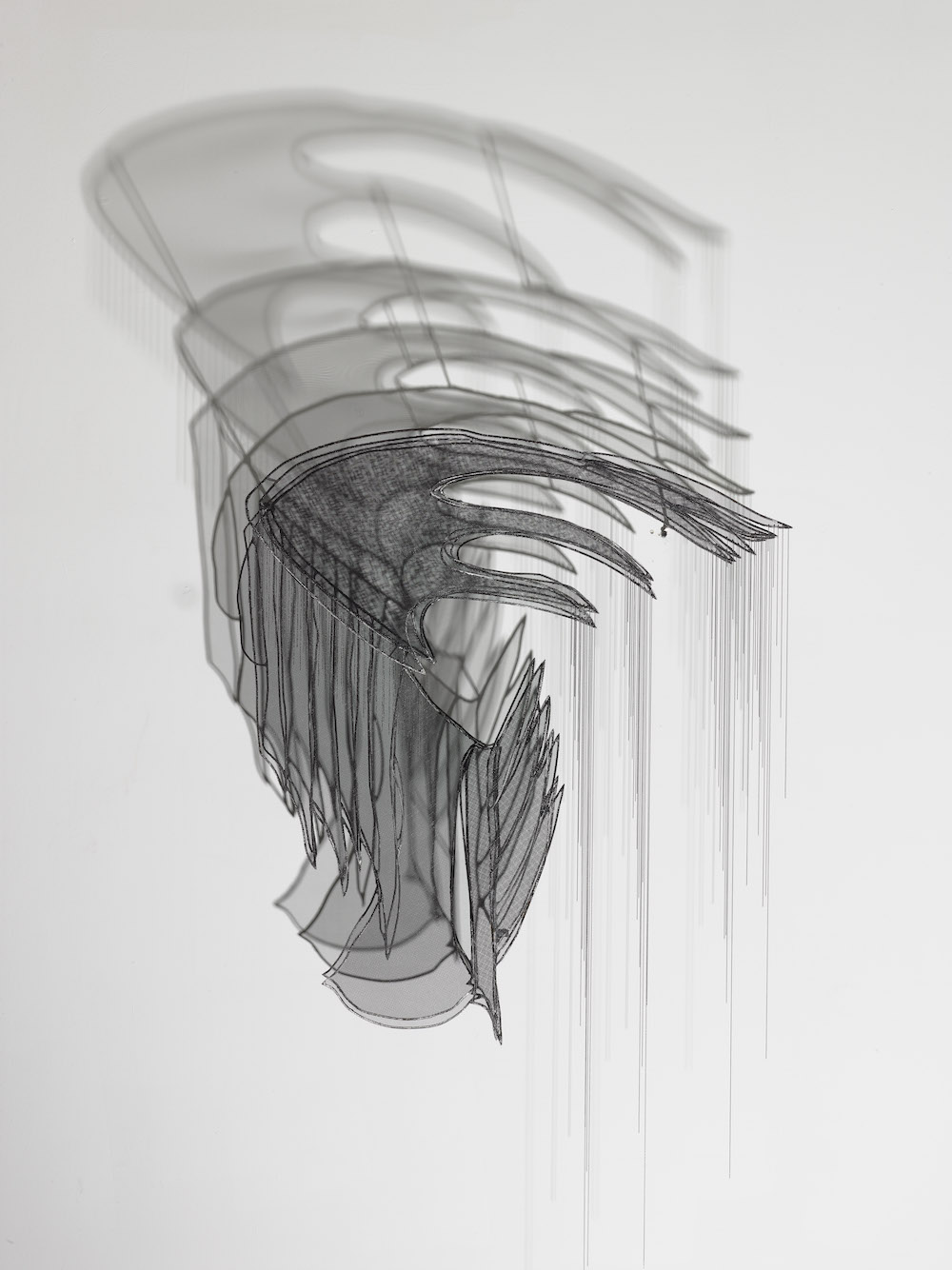 What do you believe are the biggest challenges to overcome as a women sculptor impacted by two cultures?

The biggest challenge for me as a woman sculptor has been dealing with the usual macho nonsense in the industry. And sadly the sources of this not only come from men, but from women who have so deeply internalized sexism that they themselves participate in its perpetuation.  This phenomenon I think reflects the degree to which sexism pervades our culture and has become normalized. I myself often struggle with my own internalization of sexism…constantly questioning myself, doubting, second-guessing, etc.  It would be refreshing if men were engaged even in an iota of this kind of self-reflection and engagement.  Additionally, being an Iranian-American woman artist presents its own challenges….mainly in the assumptions that are made about you and the limitations that are often inscribed in the boxes you are neatly hemmed into. But nothing is neat, is it?

What message do you wish to convey through your work?

I suppose I don’t wish to convey any message at all, but rather to transport the viewer from their present state, both mentally and physically, into a place uncharted. 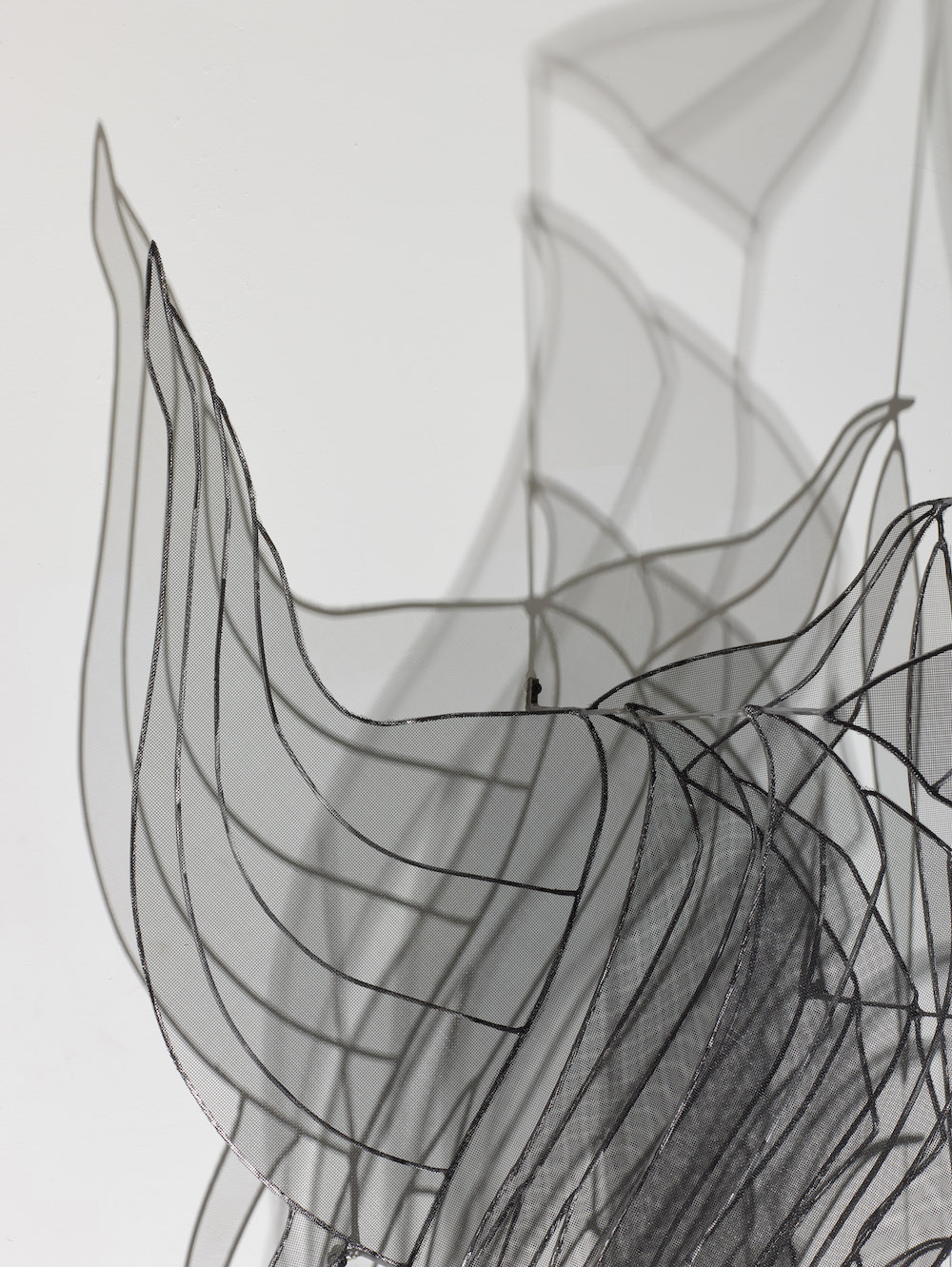 Sophia Contemporary is pleased to announce Echo’s Chamber, the first solo exhibition of Iranian-American artist Afruz Amighi in the UK. The exhibition – which also marks Amighi’s first solo show with Sophia Contemporary following her successful inclusion in the gallery’s group show ‘Shifting Landscapes’ earlier this year – will feature nine new sculptures made from the artist’s signature combination of steel, chain, and mesh illuminated by light, along with eight drawings. Spurred by the continued struggle for women’s liberation as well as by the current sociopolitical climate in both the USA where she resides and in her native Middle East, Amighi’s new works explore ideas of femininity through a series of female archetypes from history as well as the artist’s personal experience. Echo’s Chamber will open to the public on Thursday, November 23, 2017. The exhibition will remain on view through January 19, 2018.

Pictures credit / Courtesy of the artist and Sophia Contemporary