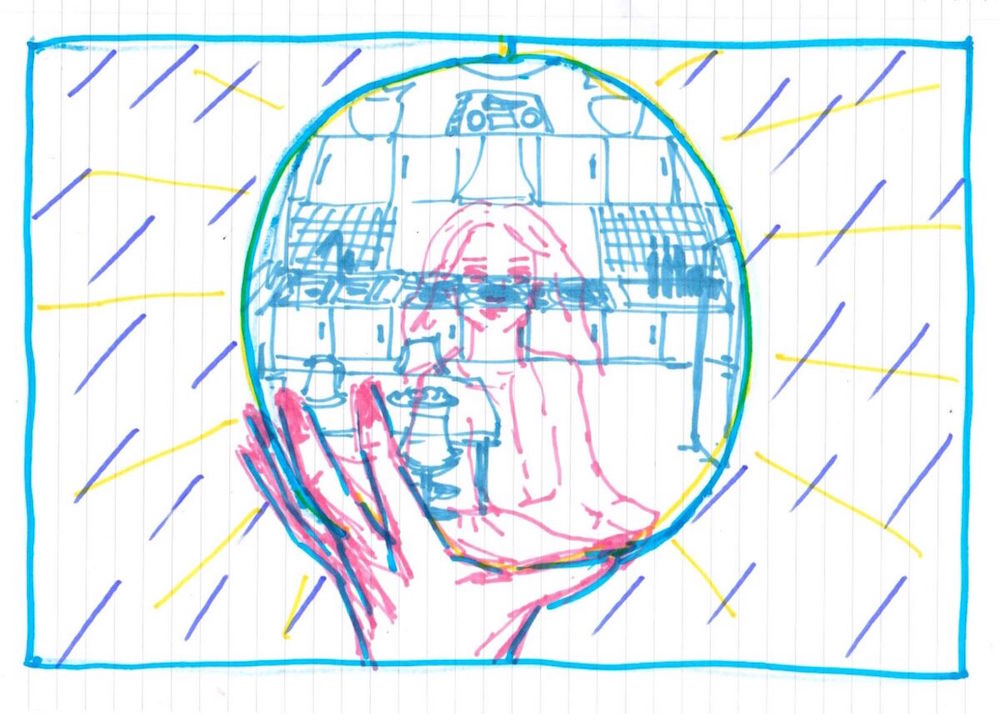 Bayti Baytek… My home is your home…. Across the Arab world this would usually be a given, as we warmly welcome friends and families to eat, drink and socialise with us in our homes and gardens. But when the coronavirus pandemic hit the world, our homes ceased to become meeting places. They became enclosures, where only a select few could come in and out.

For artists – like many of us – the forced lockdowns and curfews meant a need to find a new way of interacting with our homes, possibly becoming more familiar with our living spaces than ever before. And, in a new initiative run by Young Shubbak, six Arab artists came together across the internet to create work pondering the age-old-saying Bayti Baytek.

The premise behind Bayti Baytek is to collaborate and take inspiration from the spaces within a home and to explore the possibilities and restraints of digital spaces. Responding to an open call for Middle Eastern artists from any discipline aged 18-25, Nour Annan, Nada Elkalaawy and Doha Aboelezz were paired with Joe Namy, Enkidu Khaled and Reem Karssli, all alumni of the London-based Arab arts festival Shubbak, to artistically respond to a room within the home during a five-day timeframe.

Making use of the region’s favourite social media apps, Lebanese artists Nour Annan and Joe Namy sent voice notes and film clips between Beirut and London. Having been assigned the bedroom as a starting point, Studies on a Comfort Pillow is a film and unfinished project that explores the coping mechanisms for dealing with the complexities of self-care, technology, relationships and stillness in quarantine. Showing us glimpses outside of each artist’s window, the viewer can constantly hear the sounds of notifications reaching their phones, a reminder of the constant presence and dependence of digital screens during the global lockdown. While the usual noises of London and Beirut are almost silent, the stillness is compromised by constant pings and vibrations invading each artist’s attempts to pause. And, even as a head rests on a pillow and the film is about to end, one final ding can be heard, proving that digital distraction is constant, even in sleep.

Meanwhile, presented with the living room, Doha Aboelezz and Reem Karssli took a different approach. Having never heard of each other before the lockdown, Cairo-based Doha and Berlin-based Reem approached the project by making a sketchbook. The resulting work A Space in Time is presented in the form of a video where each artist begins by illustrating the other artist’s living space, making observations about how they decorate their home. We are then taken through their respective living spaces on camera, exploring the physical aspects of their living spaces. “I have never visited Egypt, I wish she let me look out the window longer”, notes Reem, as she appeals to all of us desperate to look outside. Meanwhile, Doha is more interested in the interior. “It seems like she collects postcards and artworks”, she says, “Maybe I’ll send her some one day.” The film redirects itself to the sketchbook, where the artists illustrate the things they have in common, documenting the intimacy of digital encounters and what our living spaces mean to us.

Nada Elkalaawy and Enkidu Khaled took a more interactive approach. Working with Belgium-based theatre makers Enkidu’s performative “working method” as a starting point. The process breaks down art-making from personal experience, which allowed Nada, a London-based painter, to create multi-layered works that reflect her internal state during the lockdown. Titling their work Ball Of Kitchen Games And Showers – the pair concluded a week of collaboration by holding a workshop on transforming memories into live acts in the privacy of your home, finishing by giving a live improvised performance themselves.

Thanks to the virtues of the internet, the artists involved in Bayti Baytek really did make their homes ours during a time when most social interaction is banned. “This is something we’ve never lived through before”, says Reem, “Let’s make art and let’s stay alive.” Proving that a little artistic inspiration and a high-speed internet connection can go a long way, the six artists succeeded in producing artworks that will be a pivotal reminder of this time in years to come.