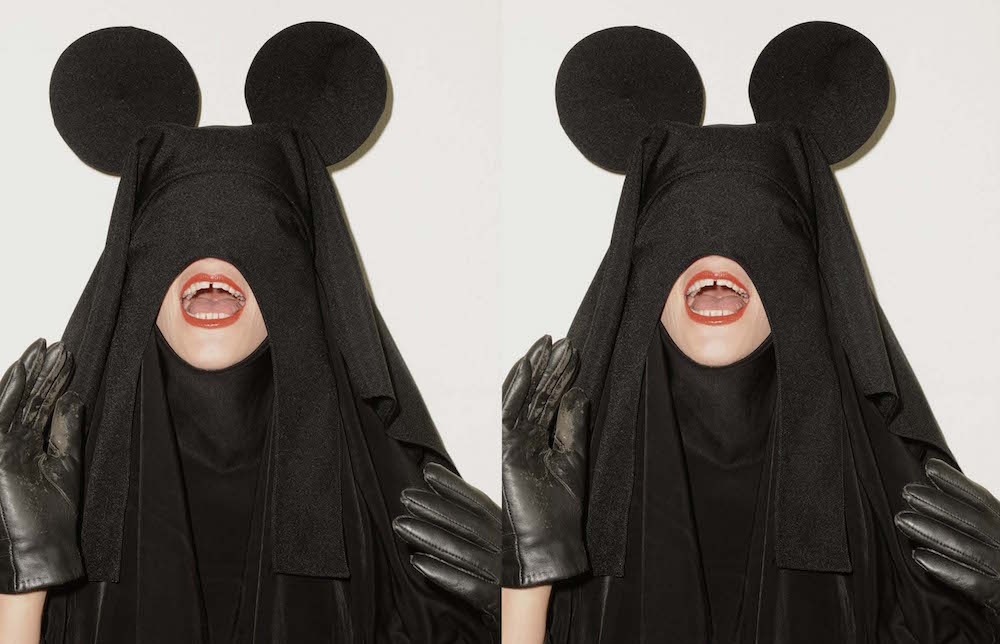 Mous Lamrabat, a Moroccan-born Belgian-raised photographer, has conquered the Arab World and beyond with striking photographs, having attracted the eyes of St Laurent Beauty (for whom he recently shot a campaign), Abu Dhabi Art and much more. Declaring that “We as Arabs/North Africans/Muslims are not represented in a good way (…) I want to show a new side of us that is new for the West, and maybe even to ourselves,” Lamrabat pushes the boundaries and “coolifies” the narratives. Meet Mous.

When did you first pick up a camera, and what was the first picture you took?

Mous Lamrabat: I think it was 2008… wow that’s 12 years ago. I saw a documentary by French photographer JR titled 28 Millimetres. The day after, I decided to ask my oldest brother Mohammed for his camera which he bought from a flea market. It was an old analogue Nikon camera that I still use today. I have no idea what my first picture was, probably just a picture of my sisters or brothers.

You are a self-taught photographer with a background in interior design. What inspired you to enter the field of photography, and particularly fashion photography?

MB: I was always interested in fashion. I mean, not in like designer clothing, but more in having my own style. I was very into Hip Hop when I was young, and I was already looking for my own “flavor” of style at a young age.
I love doing interior design and it still interests me a lot, but it just takes so long to create something inside the field. I chose photography because it’s a fast medium with fast results, but now I realize that that’s not enough for me either. In the future I want to focus a bit more on installations.

You have previously mentioned that your work is influenced by the identity crises you had growing up as a Moroccan-Belgian living in-between two worlds. How did it first come to you to merge your two cultural backgrounds together, and what was your first attempt in doing so?

MB: I think I started mixing the two when I started looking for my own DNA. I didn’t know which one to choose. Should I go more towards the West and do fashion photography like everybody else, or should I start shooting more documentary-style photos in places that are close to me like Morocco? After a long period of thinking I decided I didn’t want to choose between the two! So, I just did both, simply because I love doing both.

Mousganistan is the world you have managed to create through your work. If you could describe your fantasy world in three words, what would they be?

How do you choose your subjects, and what usually inspires you to feature someone in your work?

MB: A lot of times in my work I look for solutions to the problems that I see or that occupy my mind. Sometimes these problems are political, other times they’re personal. And if by “subjects” you mean people, then almost all the people you see in my work are people that are quite close to me, friends and family. It’s much easier that way because I am free to just focus on my work without wondering if the person is ok with what I’m doing. You might think, “Why would you care what they think?” Well, I really do. I really want good vibes when I’m working.

The imagery in your pictures is quite subversive. Do you feel like this helps in humanizing the Arab subject to a Western audience or the opposite?

MB: Well, I hope it works both ways. We as Arabs/North Africans/Muslims are not represented in a good way. So yeah, I want to show a new side of us that is new for the West, and maybe even to ourselves. Putting all these different cultures together attracts a bigger audience because a lot of different minorities and majorities recognize something familiar in the images. So, when I have an exhibition, I really enjoy seeing all these cultures, colors, and ages coming together for something that I created for them. It makes me feel like a kid with divorced parents trying to get them back together.

How do you feel social media has allowed your work to gain visibility? Is your creative process influenced by the need to create content for your social media platforms?

MB: Um, yeah! In this day and age, most artists get discovered through social media. Right? Social media can spread content really fast because the whole world is connected. I love all these social media platforms, but we must also be careful not to lose ourselves in them. We need to influence people and not try to make them jealous. We need to realize that because of social media there are more and more people who are depressed and unhappy. So, if you have influence, think twice of how you can affect people. I feel like there is so much uniformity in how people act and behave, so many of the same person. Just be yourself and you already have a much bigger chance of standing out!

In a social media space that is cluttered with content, what do you feel makes your work stand out (...)

Read the rest of the interview in JDEED Issue 6, now available for worldwide delivery on Lebelik, in Lebanon at many points of sale and via Toters, in Dubai at Design House Concept Store ( Gate Avenue DIFC) and at Amongst Few, in Jeddah at Homegrown Market and in Amman at The GoodBookShop. JDEED 6 will be available from July 31st at Papercut in Stockholm, WH Smith in Paris and I.m.p.o.r.t News in NYC as well as Tokyo in August!