BEIRUT DESIGN FAIR’s third edition will showcase work from more than 50 exhibitors, both local and international, from the 19th of September till the 22nd. After last year’s success, BEIRUT DESIGN FAIR is back this year with a mission to increase the scope of participating designers and to propose a wider range of media. This edition will allow visitors to explore the vibrant—and sometimes chaotic—design creations of the Middle East. The fair will also feature work from European designers (Belgium has a notable presence this year). As you explore BEIRUT DESIGN FAIR, which is going to be held in the same hall as BEIRUT ART FAIR, don’t forget to keep an eye on these following designers.

Christian Zahr Studio is a multi-disciplinary studio that merges different design scales, from architecture and landscape to product design and art. Founded in 2012, the studio has been exploring form, function, and materiality through sculpture and furniture. Their objects reflect both disciplines and are inspired by traditional design, such as vernacular architecture and artefacts. The studio’s technique, however, is not traditional but rather bold and rough. Zahr’s work has been featured in a variety of international design magazines, from Dezeen to Wallpaper. 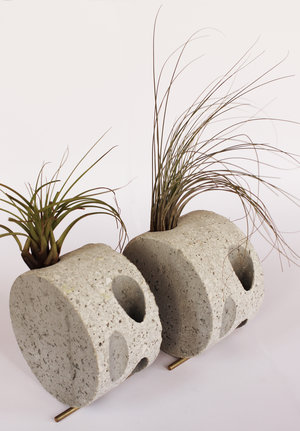 The intersection of design with digital production continues to develop, especially in this edition of BEIRUT DESIGN FAIR. Marc Haddad’s designkultur and Charbel Chaghoury’s Jigsaw are collaborating this year to showcase the potential of digital fabrication in the fields of architecture, product design, and fashion. Designkultur is a platform that specializes in parametric and computational production, and Jigsaw is a material research and form finding studio. Both of their works have an edge compared to other designers, as they rely on machines and 3D modeling to create their products. Their pieces are a tangible glimpse into the future of digital design.

FLUKKA is a jewelry brand that celebrates the friendship of its two founders, Claudia Elissar Chahine and Mirna Tabet Bardawil—and their shared heritage of Tyre. The timeless pieces of jewelry, made of gold or sterling silver with precious stones and diamonds, tell the story of the coastal city’s mythology. Inspired by the sea, by Tyre’s history and ancient art, FLUKKA’s contemporary pieces are not only an ode to women of today, but a celebration of the cultural narrative of Tyre.

What started as a small furniture store in 1997 became in the span of a decade a successful, internationally-recognized design name. NESHIMAN, an Iranian furniture establishment, intersects traditional craftsmanship with contemporary concepts. Their body of work shows their different crafting techniques, from carving and mosaicking, to hand weaving and hand mirroring. The designers behind it believe that it is through human touches that a product gains its soul. This principle—which NESHIMAN carries both in theory and in practice—led them to win several international awards, including the Harper’s Bazaar “Emerging Designer” award in 2015

Intrigued about themes of nostalgia and reminiscence, Lebanese artist Nevine Bouez explores questions related to national integrity through a variety of media—most notably clay. In 2017, her two towering hand-built ceramic sculptures won her the Audience Choice Award at the Sursock Museum. The pieces feature the famous “Tarbouche” and propose a representation of Lebanese identity Her investigation of national values seems to be internationally appreciated, as her pieces reside in houses all over the world, in cities such as Cairo, Dubai, and London.

The collaboration between architect/designer Roula Salamoun and Lebanese design platform House of Today probes the relationship between the human body and its environment (spaces and objects). Roula’s designs distinguish themselves with their experimental—and experiential—approach. This year at BEIRUT DESIGN FAIR, Roula is introducing products and landscapes that are intriguingly human-like. The idea behind these anthropomorphic designs, which are placed in a domestic setting, is to provoke visitors and let them envision how the notion of body can affect actual spaces.