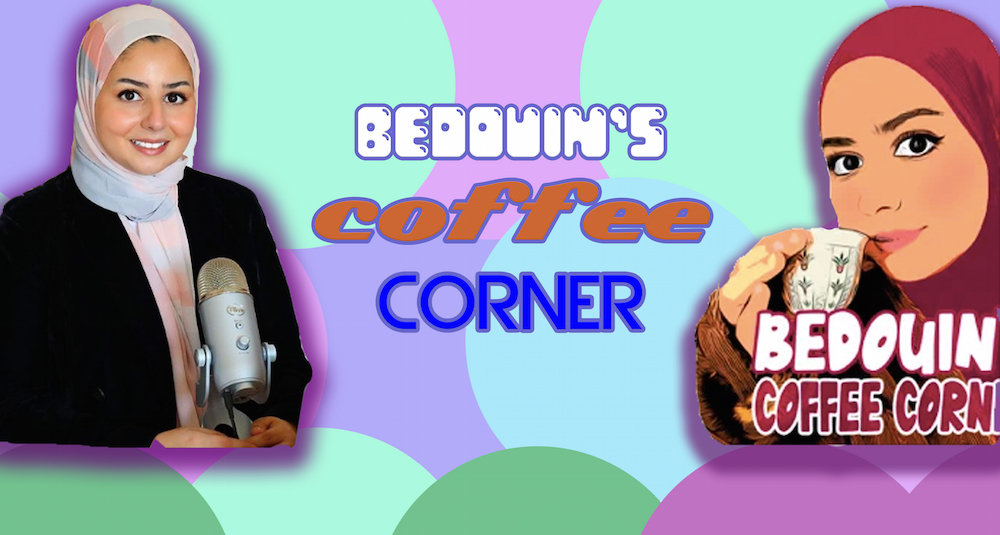 A talk with Sabal Almadi of Bedouin’s Coffee Corner, the Podcast tackling Western Prejudices on the Middle East

Meet journalist Sabal Almadi, founder and host of  Bedouin’s Coffee Corner, a podcast originating from Saudi Arabia which aims to highlight “creative initiatives, progressive movements, and change-makers in the region.”
On Bedouin’s Coffee Corner, guests come from all over the Middle East; its hope is to embrace the different Arabic cultures and their heritage while unveiling that side of our region to “Westerners”, who, too often, are exposed to one -usually negative- media narrative.

The platform was quick to bring together around 27K followers, and has been featured in renowned publications. Today we speak with Sabal to know more about the podcast and its ambitions.

Hi Sabal! Can you tell us a bit about you and how you started doing podcasts?

Hi! Thank you so much for having me, this is an honor 🙂 . I was born in the States, raised in Saudi Arabia, Jordan, and the United Arab Emirates. I come from Jordanian origins, so I pride myself for being very in tune with my roots. I started the podcast because as an Arab, I felt like the typical stereotypical narratives are incredibly prominent in the international media. As I was doing my Master’s in Journalism at NYU, it became more apparent to me that most of the journalists covering the Middle East weren’t people very familiar with the culture.
Unfortunately, in this day and age, a lack of representation is very disappointing. I wanted to have a platform for progressive Arabs & Expats in the Arab world who are doing something new in our society, or feeding into major movements in the Middle East to share their voices and stories, thus the podcast was born.

What exactly is Bedouin’s Coffee Corner and why this name?

Bedouin’s Coffee Corner is a podcast with both audio & video components that covers initiatives, progressive movements, and change-makers in the Middle East. It’s quite literally a project I pour my heart and soul into. The podcast is incredibly important to me as the people on the show share their stories that break negative stigma, assumptions,and just reflect the flourishing society we are in which usually gets negative coverage in the international media.
Haha good one, so my father’s family come from Jordanian Bedouin origin, which means your girl is also from Bedouin roots. I’ve always been incredibly intrigued with the Bedouin culture and traditions, one of which we are most known for is our coffee (traditional Arabic qahwa). As someone who is incredibly obsessed with the coffee corner in our house, it just made sense when one day my mother, sister, and I were talking about the podcast and how we could bring my heritage in the name, thus the Bedouin’s Coffee Corner was born from the heart of the Middle East.

How do you decide which guests you’d like to have on the podcast?

I usually go looking for my guests, 100% guilty of sliding into people’s DM’s who I find interesting to have on the show. Really anyone from any Arab country who is doing something fresh, new, or making an impact that catches my eye. I also look for expats who are creating something great in our society or feeding into movements to have on my show. I always say, my DM’s are always open though for people to reach out with their stories, if they fit the category, we can work towards having them on.

“My main audience now comes from the Gulf & Jordan, so much love to my Khaleejis and Jordanians. DM me if you’re a listener, let’s be friends (like actually).”

Do you believe podcasts are a good way to raise conversations in our region where a lot of topics remain taboo?

One hundred percent, podcasts are an awesome way to get the pot stirring. I don’t know about you but I’m most likely to listen to a podcast alone (while driving, working out, cleaning my room) so it really gives me the time to reflect. Then, when you’re around people you’re bound to mention something you heard in a podcast, like “oh the other day I was listening to so and so and they said this and that” : that situation in itself causes a discussion. The more we hear different perspectives, sides, or narratives, the more we expand our thinking. You might still believe what you believe after listening to an episode that might discuss something taboo but at least you have also heard the other side of the discussion which may allow you to be more compassionate towards others.

How has the podcast been welcomed and who is your main public?

Alhamdulillah (praise be to God) , I feel like so far the reaction to the podcast has been good. Overall, I have been overwhelmed with the positive reactions to it. As long as this podcast makes one person feel proud about being from our society, or inspires someone to make the move they’ve been wanting to make, my job is being done right. It’s an incredible honor to me that people tune in.
My main audience now comes from the Gulf & Jordan, so much love to my Khaleejis and Jordanians. DM me if you’re a listener, let’s be friends (like actually) . Surprisingly, I have quite a good amount of listeners from the States and England which is nice as it makes me feel like we are also changing the stereotypical thoughts some might have.

Who would be a dream guest to host?

This is the most difficult question I get asked. I have a lot of people on my list that are “dream guests” people I looked up to from my childhood, others I was introduced to in my adult life. I’ll give you a few from both chapters of my life.
I would really love to interview Ahmad Alshugairi, he played a significant role in my younger years. His show really impacted my character and I really admired how eloquent he was in his thoughts, how he framed things to appeal to us. Was and still is truly a great role model for me.
I have a long list from my adult life that I would want to have as a guest but I will give you three(all on the same level/ priority for me): Manal Rostom, Rebecca Odeh, and Anas Bukhash! Hopefully, one day, I will have them all & others on my list on the show. I’m optimistic 🙂

What are the future steps for the podcast, for you, and what is a goal you would love to reach?

The future steps would be to get investors ( if you’re someone or a company who would want to invest in this, let’s do it 🙂 ) in order to turn this into a full on production on a network (Hi OSN & MBC). A goal I would want to reach is to start monetizing this project, the reason is the more attention the podcast gets,the more it has a chance at turning into a show (video & audio) on a network which means more stories/ voices of the Arab world will be heard globally.
As for me, I would love to be able to start landing collaborations. That would allow me to focus most of my time and attention on further developing and building the show. I’m also a public speaker so I’m looking towards marketing myself as a moderator/ speaker. Truly, the end goal and dream is to have my own talk show that works towards shifting the narrative and inspiring others globally.