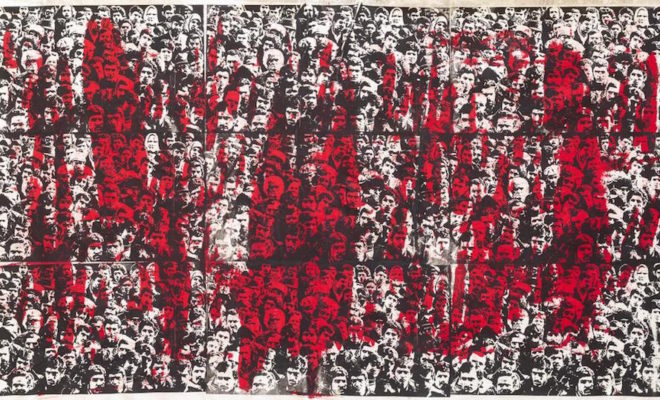 Behind Jorat, an exhibition for Iranian artists in London


From February 6-11, the Jorat (Courage) exhibition will be showing at Espacio Gallery in London. Curated by Anahita and Emilia, two young Iranian women living in London, the exhibition will feature a diverse array of Iranian artists who center around the theme of courage in light of the Zan, Zendegi, Azadi movement and protests.

The exhibition space, which includes two floors, will be a mix of politically charged pieces mixed with works centering Iranian culture, including eclectic pop collages by Marziyeh Saffarian and a screening of Saleh Kashefi’s award-winning short film, “She who wasn’t tamed”. In addition, the works of Alexander Cyrus, Alireza Elahi, and Sarah Saidan will also be featured.

Though only on for a week, Anahita and Emilia have planned numerous events, including an open press day, bracelet pop-up, poetry reading, and musical performances.

We caught up with Anahita and Emilia to learn about their process of creating and imagining the exhibition, what they hope to get out of it, and how they chose Jorat’s respective artists.

Hi! Starting us off, can you speak a little bit about the inspirations behind creating this exhibition?

We both grew up outside of Iran but have family living there, and were struggling with a feeling of helplessness while watching the Zan, Zendegi, Azadi protests unfold from afar. We wanted to bring our communities together to stand in solidarity with Iranians who are facing immense political and emotional hardship while standing up for their rights. We instantly chose the name “Jorat” for the exhibition, because that’s what we wanted to highlight and were most struck by: the courage and bravery of Iranians.

While we wanted to support Iranians both in Iran and in the diaspora, we also wanted to underline how the protests made the complex realities of Iranians within the diaspora resurface and to provide a platform for engaging in conversations around Iran. Above all, we wanted to draw attention to the incredible talent of Iranian creatives and to use the exhibition as an opportunity to open up an inclusive dialogue.

How did you decide on the artists? What do their respective works mean in conversation with each other?

Deciding on the artists was the most exciting and challenging part. Because neither of us have a professional background in art, we slid into artists’ DMs and were amazed by the number of kind responses we received. Unfortunately there were a few incredibly talented artists based in Iran who couldn’t participate due to fears of being executed or because of the complicated logistics of shipping the artwork. We had to be flexible in this regard. One example was Alireza Elahi, a painter based in Tehran whose abstract paintings would have been an honor to include, but which were not able to be shipped from Iran. We knew Alireza also takes incredible photographs however, and were ultimately able to include his voice that way. His nine abstract photographs of walls in Tehran not only beautifully mirror the brush stroke of his paintings, but also represent a key piece of visual input for what the protest movement is made up of.

Another example was Sina Choopani, an artist based in Tehran, whose powerful experimental art we fell in love with. We Whatsapped with him back and forth for two months discussing how we could include his work in our exhibition, until he managed to hand one of his prints to his friend in Tehran, who lives in London and was able to bring it to us.

Our intent was to prioritize giving each artist a voice, rather than curating the “perfect” show. Additionally, it was important to us to include a diverse array of artists, whether that diversity related to the amount of experience the artists already have, whether they grew up in Iran or abroad, or what materials and media they use in their work. To us, providing a space for the multiplicity of voices and differing messages – a space with ultimate freedom to express themselves – was how we felt we could do justice to the complexity of an unfolding revolution.

What message do you hope to convey to the viewers in this exhibition?

First and foremost, we would like to contribute to and uphold momentum for the Zan, Zendegi, Azadi movement, and create a sense of hope and urgency for change. Ever so often, awareness for political issues dies down after the initial news sensations. The future of Iran lies in the talented new generation whose voices must be heard, even if that’s from abroad.

Art is a powerful tool for sparking discussions and bringing thoughts and feelings to the foreground. Iranians and Iranian artists should be able to express themselves however they wish, without having a fear of being executed. As such, paying respect to their right of expression is very important to us.

Seeing as the exhibition is only up for a week, what do you two hope to accomplish in that time? What does a short term intervention mean to you?

We hope that bringing people together in an international city like London and providing a curated space dedicated to the political situation in Iran will make it more tangible, even if just for that evening. We aim to achieve that delicate balance of highlighting the need for change while honoring Iranian talent.
If our viewers walk away with an increased sense of empathy, that could go a long way. Hopefully, the exhibition will inspire an interest in Iranian art and culture beyond the exhibition too. What matters most to us is that we were able to elevate Iranian voices while making non-Iranians aware of how much their voice in this matters too.

What are you two doing to maximize coverage attendance? Events, etc.?

We started by spreading the word to our respective communities, and encouraged our friends, work colleagues and families to bring whoever they know to the Jorat exhibition. We also reached out to a variety of news outlets, prominent Iranians, and exhibition news sites and have been able to raise awareness in this way. In particular, we have had positive engagement from the Financial Times, Art Rabbit, London On The Inside and now Jdeed!

We have organized the week into two evening events and day time openings to give everyone an opportunity to engage with the movement and the art generously contributed to the exhibition by Iranian creatives.

For Tuesday the 7th of February, the opening night, there will be drinks and a bracelet pop-up, while Friday evening will consist of musical performances and poetry readings. During the day, the space is open for anyone in the city that stumbles across it.