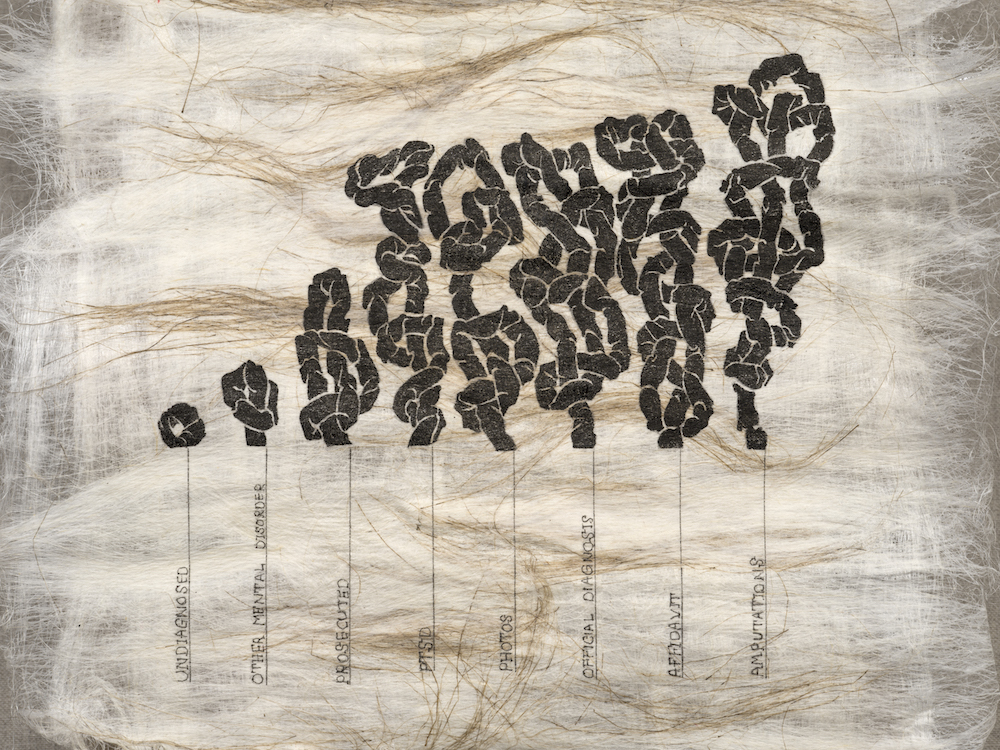 Los Angeles-based Iraqi artist Hayv Kahraman presents a new series of work, titled ‘Gut Feelings’, at the Mosaic Rooms, a non-profit art gallery and bookshop dedicated to promoting contemporary culture from the Arab world and beyond in the Kensington neighborhood of London.

Kahraman’s exhibition features a variety of paintings, drawings, and mixed-media sculptural forms presented around a central theme of intestine-like cords surrounding female figures. These cords emanate out of each figure’s abdominal area and spread beyond the frame of the work, yet are also all in conversation, through body language, with the woman they come out of.
Kahraman calls these intestine-like cords entanglements, reminiscent of neurotransmitters, a complex web of interconnectivity that simultaneously entrap and emancipate the female figures entangled within them. Particularly poignant are the visual gazes coming from these figures, seemingly in a surveillance-esque conversion with the intestinal periphery of each work.
To Kahraman, these entanglements investigate the processes of staying within trouble, within an entangled ontology, growing and working with entanglements, while realizing the need to get unstuck.


Supplementing Kahraman’s visual emphasis on entanglements and a larger question of ‘How do we get Unstuck?’ is a detailed research process of materials. The work spans woven linen sheets, sculptural strands of linen, canvases, and jars with reddish liquid and small vegetables resembling intestines within them, like the tradition of pickling in the Middle East. Adjoining the exhibition is a 9-minute recording from Kahraman detailing her process specifically surrounding the material choices of the work, particularly thinking about the intestinal microbiome, living with bacteria, and looking at the self through the margins, a process of living in symbiosis with the other.
One aspect of this investigation was Kahraman making her own substrate using flax fibers, a process of problematizing the use of linen as a primarily Western surface for painting, questioning how we can unlearn, re-learn, and deconstruct productively. Another aspect of the work’s engagement with the material is the painting medium itself–the pink on each canvas and flax sheet are painted with turshi, a common regional food of pickled vegetables, often pink in tone. Using turshi is a collaboration between Kahraman and the bacteria fermenting the vegetables, a collaboration that encapsulates the larger themes of the exhibition.

Overall, Kahraman’s new work shows a deep engagement with the somatic, a detailing of the meshings of embodied trauma, neuroscience, and the extravagant interactions with the microbiome–an ontological feeling of the gut that informs the process of becoming ‘unstuck’. Rooted in an awareness of self-care, Kahraman’s work interrogates how one survives through pain, how pain is imbricated with the self at a microbiological level, and, ultimately, how to live with that pain. The work draws heavily from contexts of war, particularly refugees in Sweden and the somatic trauma they carry: in the exhibition’s audio recording, Kahraman reflects on how humanitarian aid agencies carry a trauma portfolio, seeking out and sorting refugees based on their level of trauma, a way of converting pain into a metaphysical currency.
The exhibition is substantial for both the Mosaic Rooms and Kahraman. Angelina Radakovic, curator at the Mosaic Rooms, notes how the exhibition is Kahraman’s first public gallery solo in London, and that this provocation to imagine new forms of care felt timely and necessary. The installation aims to create a deeper, more intimate relationship and insight into the paintings and ideas that helped shape them, as well as providing a space of experimentation–for example, the new handmade flax material–for Kahraman.
Kahraman’s work is on display at the Mosaic Rooms until May 29th. Along with the exhibition comes numerous public programmes surrounding themes of healing practices and methodologies of repair, featuring artists, activists, collectives, and thinkers from a number of disciplines, including microbiology, political anthropology, medicine, and intersectional feminism.


The full programme can be found on the Mosaic Rooms’ website.