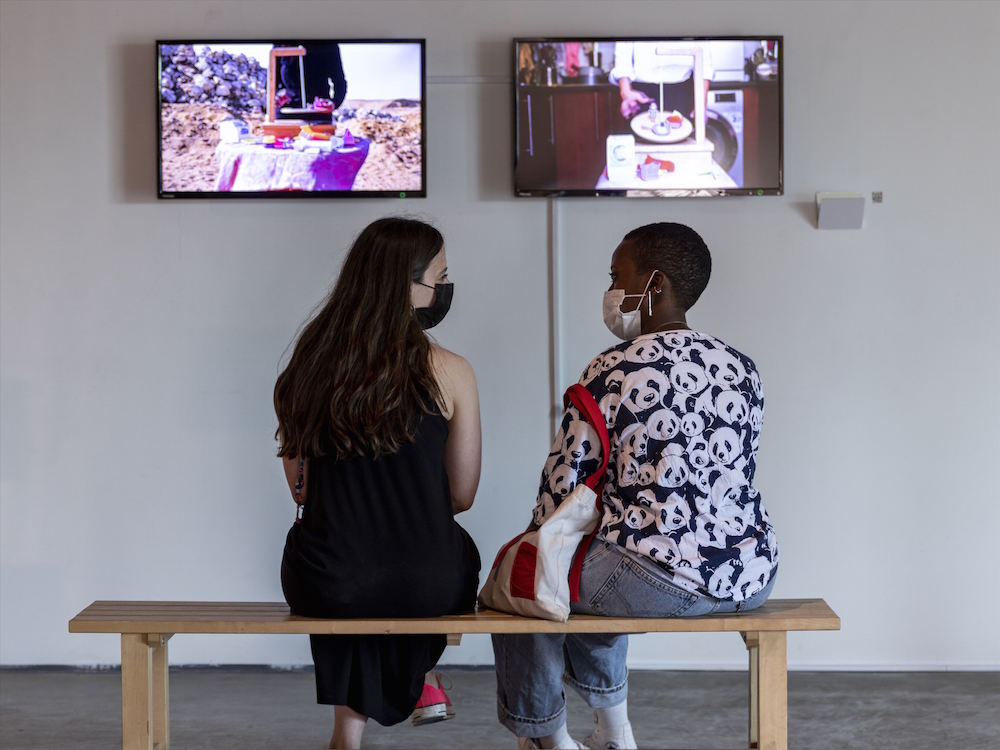 
Remote Closeness, a hybrid exhibition focusing on themes of connectivity and physical proximity, is now open until September 8. The exhibition came to fruition from the work of various cultural workers from across Jordan and features 17 projects created by more than 20 creatives. Remote Closeness consists of an online exhibition, a public program with talks and workshops, an interdisciplinary exhibition at the Jordan National Gallery of Fine Arts, along with art trails through different neighborhoods of Jordanian cities, where QR codes link to the artworks exhibited. We caught up with two of the curators behind Remote Closeness to discuss these themes and the exhibition’s goals.

How did you decide which pieces to feature online and in-person? What was the curatorial process like for deciding Jordanian neighborhoods/cities and works to be in them?

A few months ahead of the show, Remote Closeness (RC) put out an open call and sent it out to the world. We received around 60 submissions from all over the globe and the selection process was based on the submitted work’s relation to the theme, which was fostering connectivity and audience engagement in a time of remote communication, as well as the potential of having the work exhibited both in a physical and cyber space, and lastly, originality of the work itself.

The curatorial team then worked closely with the artists behind the 17 selected projects to (remotely) execute the physical representations of the work, as most of the artists taking part in RC do not live in Jordan. In some cases, the online work was featured as an event within RC’s public program (as was the case with Misanthrope Collective’s Machine (Un)learning) with a physical installation of a QR code linking to the collective’s online performance inside the exhibition hall. In other cases like in Fatima Butt’s Dayneah, the artist sent the curatorial team artistic instructions to follow in order to recreate elements of the work, which were sculpted by members of the team and installed in the physical exhibition.

All 17 projects had a physical iteration that complimented the online version in the exhibition hall, and as curators, we were very blessed to have the artists’ full trust and support in our own curatorial vision.

As for the process for deciding on different Jordanian neighbourhoods/cities to work in, our main objective going forward during the brainstorming process leading up to the final show was to be as inclusive and approachable as possible. We wanted to take the show to audiences beyond the capital and into other locations in the country. We had trails inside 8 different cities including Umm Qais and Irbid, on store fronts in the capital as well as inside Petra’s visitors’ centre in the heart of the pink city where locals as well as tourists were able to access the online show.

Can you describe the process of public installation? Did the curators or artists encounter any challenges or unexpected facets to displaying the work?

With help from local participants from the 8 Jordanian cities taking part in RC, the local community was activated through conversations around art and engagement by physically contacting store owners and asking them to take part in this global show. RC artists from Zurich, Pakistan (geo pins hyperlinked), Syria, Lebanon and Egypt also placed their own art trails within their cities. The art trails encourage people to walk around and seek art in the public sphere. This allowed the posters to harmoniously blend with the city’s chaos. Store fronts of barber shops, supermarkets, dry cleaners and vegetable markets became our exhibition halls.

What was your hope in presenting QR codes in public? Have you had good success so far from passersby? What’s the meaning of public, visible art to you as curators and artists?

As curators, we approached the handling of all artwork in a way that makes them easily accessible, understandable and bilingual to audiences of various backgrounds. We tried to eliminate the occasional feeling of intimidation people feel when they enter a cultural space. The short, brief descriptions on the posters also help demystify the works.
During our guided tour around one of the trails in the capital, we started out with 14 participants and ended up with 20 by the end of the tour. Passersby were joining mid-way through our walk, accessing the online show through their phones and sending out links to their friends and family.
It was evident that public art has a role to play in the public environment as people were thirsty for more! Even the
local policemen joined in on the action to access the online show during the tour and started a conversation on the importance of fostering some sort of artistic education, what it means to have ‘artistic taste’ and the normalisation of art in the public sphere.Which is exactly the point of creating public art: having constant reminders that art ‘exists’ in the environments of those not submerged in the field.

Who do you envision this exhibition to be for? How do you hope these works can inspire connectivity?

This exhibition is aimed, in its design, to anyone and everyone. The drive behind Remote Closeness was to create a new approach to an art event that took into account the challenges brought forth by the pandemic, and to find novel ways to connect artists to the audience.
This approach, beyond the logistics of organizing a remote event, concentrated on themes such as inclusivity, connectivity and co-creation, in an effort to foster collaboration between artists and people who will enjoy their works. It also sought to ‘poke’ an audience who, traditionally, is not compelled to visit cultural spaces on a regular basis.

In addition to having the artworks readily available in the street, connectivity comes in the content of the works, many of which elicit an action, a response, or an idea to incite further communication. Connectivity is also achieved by some of the works that were based on collaboration and co-creation among several artists, or between artists and the public.

What is the community you are looking to create around this exhibition? How does the exhibition navigate the intricacies of being at once very localized and in-person while also open to a worldwide audience?

Our curatorial approach definitely puts an emphasis on community building. We sought to achieve that on several levels. First, in our communications with the participating artists, we made sure we connected them as a group rather than converse with every artist or collective
individually. Despite their remoteness, we tried to give them many opportunities to feel an integral part of the event, and of a group of artists that can communicate with each other.
On the content side, we created a public program that specifically creates community. We designed a series of workshops that created a multitude of little groups of people who connect to each other around their interest for a common theme. We hope that this fosters a continued communication or collaboration amongst them, beyond the first workshop they attended during the event.

The artworks highlighted in Remote Closeness, whether by their content or nature, are universal. They talk to our needs and feelings of belonging and connectivity as human beings, and transcend geographical location. This is the beauty of this event: people who attend the exhibition can relate to the physical manifestation of the works as deeply as members of the audience who access the digital form of the art pieces.

Given the insistence on your surveillance and digital presence, especially in the Middle East, over the last few years, do you see Remote Closeness in conversation with any of these larger themes? As we’ve seen during the pandemic, digital closeness, privacy, and security have often been abstracted and blurred by larger, political forces. Does this art intend to react to any of this within a specific regional or local context?

While some of the artists tackle the issues of digital presence and security in their work, Remote Closeness primarily concentrates on human connectivity: the need to communicate and to feel part of a community, despite the distance. And for artists, the need to continue to create and to have a voice, even if venues are not as accessible as before. Of course, the digital world presents its challenges, and one has to navigate it with caution, but it also has this power to build bridges over multiple barriers of distance, time, language, and masks…