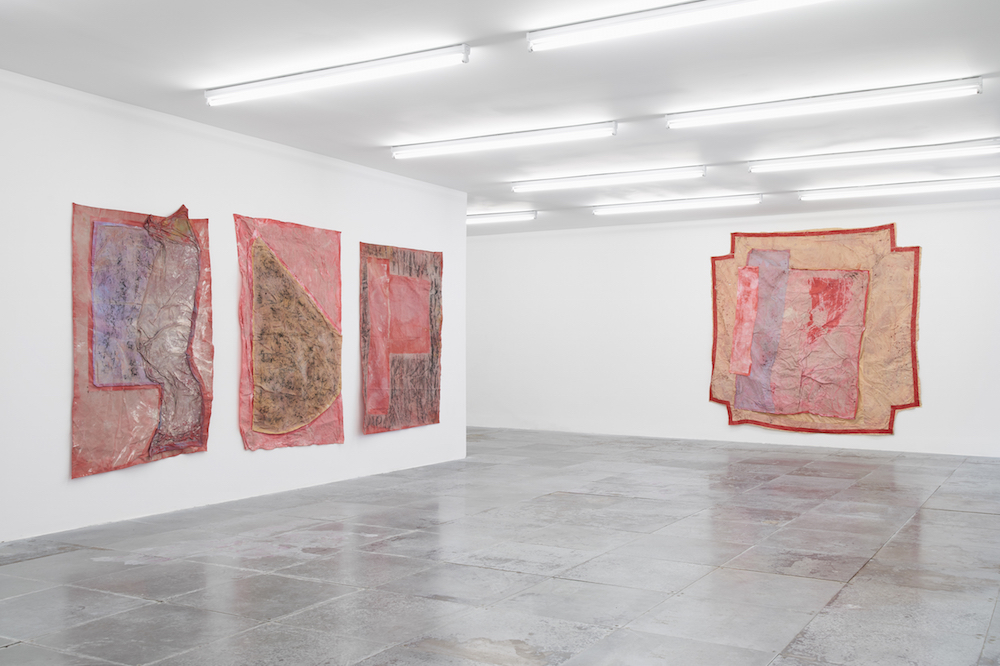 Lebanese artist Dala Nasser opens her first solo show in the UK, Time spent without its flow, at Soho-based V.O Curations. We had the chance to visit her exhibition and speak with Dala at the opening, now available to the public until 5 May.

Nasser is primarily a materials-based artist, her methods surround alternative image-making forms, from film to performance to textiles. Her works imbricate ecology, the environment, history, and politics that arise from generations of colonial erasure in her home of Southern Lebanon. Nasser’s practice is wholly site-specific and context-specific: from sourced materials to dyes, her work remains grounded in the lands of her ancestors and the lands faced by decades of military violence.

Her new work in Time spent without its flow consists of 6 painted and etched canvases made of found textiles in her great-grandparents’ home in South Lebanon. A line of inquiry into the histories of the region’s ecologies, these textiles include pillowcases, sheets, linens, and curtains. When speaking with Nasser, she laughingly pointed to the holes in two bedsheets, borne from her uncle’s habit of smoking in bed.

Created over several months, Nasser pieced together these discarded fabrics in ways that comment on the sharp divisions found in her homeland. Red tape outlines most of the pieces, reminiscent of strong borders, what curator Odessa Warren calls “the intense militarisation and surveillance of a place which sits at the edge of a country that cannot contain it and the tip of a frontier it cannot cross”.

On these canvases Nasser creates charcoal etchings over flintstone terrace walls and olive trees planted two hundred years ago. She left these canvases outside for months at a time to physically weather over the winter, a process that renewed these reclaimed textiles with a finish of rainwater, ash, salt, and other materials of the earth. Rain and wind washed away her etchings, and Nasser returned once more to etch them after months of weathered solitude, an ode to her practice’s deep involvement in “temporal practices of caring, tending, staying, and enduring”. These semi-permanent etchings are a testament to the power of care evident in Nasser’s practice, a practice that bears witness to the passage of time through a region visualized in terms of militarism and violence. Made through and beyond passed time, her methods and works comment on a temporal fluidity that rejects many narratives of South Lebanon. Yet, these pieces are also remarkably static – the hibiscus, rose, and poppy flowers Nasser dried and utilized as dye are only available during the wintertime, a specific decision that, Nasser notes, would have radically altered the visuality of the pieces should she had completed them during the summertime.

Her favorite piece in this collection, she remarks, is a smaller piece – No. 6 in the exhibition – that was etched on a flintstone terrace wall, walls that have been harbingers of stability and identity to her family home. Despite the textural complexity of her work, Nasser exclaims she’s rather minimalist and enjoys this piece for its sharp structure and tonal contrast.

Despite Nasser’s methods grounded in and around her family’s home, she spoke to us on the encroaching realities of diaspora. As she completed her education in the West and spends more time separated from Lebanon, Nasser is increasingly aware of the diasporic attributes her work carries. We asked her how she feels about presenting solo in the UK for the first time, given that her work remains so connected to Lebanese realities. Nasser describes that, to an extent, she is coming to accept her status as someone in diaspora, yet, she maintains that her work is not inherently focused around diaspora or identity-making in diaspora. She similarly remarked on the feeling of translating her site-specific work to audiences not familiar with geographic and political contexts, noting how through processes of explanations and translations, Nasser feels that her work can be appreciated by everyone. However, she does not worry about the palatability of her work, and maintains that any acknowledgment and understanding of her work is meaningful, even solely aesthetic ones.

Time spent without its flow is a remarkable curation of Nasser’s intervention into the ecology and time experienced in her familial home in South Lebanon. Through a practice grounded in her ancestors and their land, she produces works in “suspended states of unmaking,” an exercise in memory and practices of care that transcend time and center the renewal of everyday life.

The exhibition is on view until May 5.